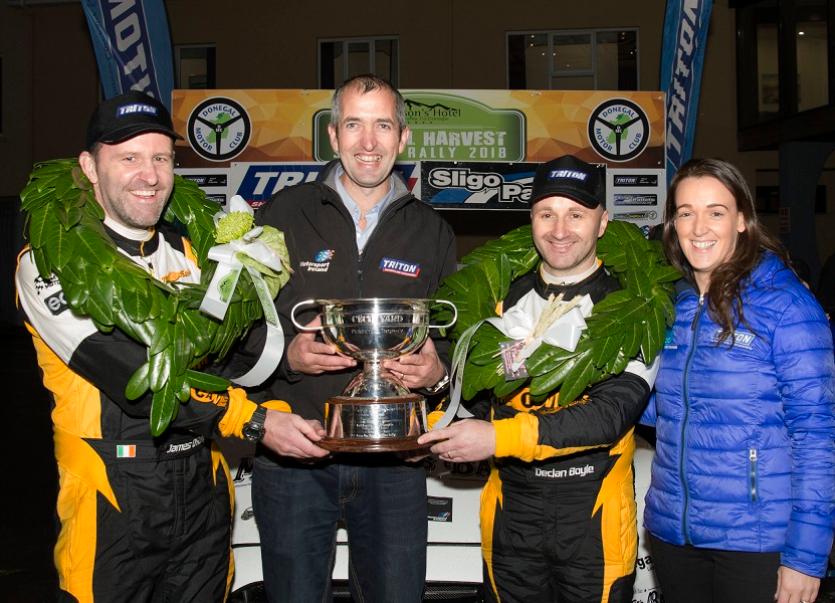 Declan Boyle with the Triton Trophy

Donegal’s Declan Boyle (Ford Fiesta WRC) and his Monaghan co-driver James O’Reilly have won the Triton Showers National Rally Championship courtesy of their eighth place finish in the Jackson’s Hotel Donegal Harvest Rally, the seventh and final round of the series.
In extremely wet and difficult conditions, Boyle overcame a stomach upset to steadily increase his pace throughout the day. Needing a top eight-championship finish, the Lettermacaward driver had an anxious final stage when the windscreen of his Fiesta WRC misted over, however, he managed to complete the stage without incident and take 14 Triton points (fifth placed championship points) to win the Triton series. It’s his third national success and he now joins Monaghan’s Niall Maguire as a triple national rally champion.
Event victory went to Monaghan’s Sam Moffett and his Cork co-driver Karl Atkinson (Fiesta R5) - they finished 7.9 seconds ahead of the Fiesta WRC of the Monaghan/Limerick combination of Josh Moffett/Keith Moriarty. The Donegal/Monaghan duo of Donagh Kelly/Conor Foley (Ford Focus WRC) were a minute further behind in third.
The rally.ie award (highest placed two-wheel drive in the Triton series) was won by Cavan’s Chris Armstrong and his Donegal co-driver Chris Melly (Ford Escort). Their rival Stuart Darcy crashed his Darrian T90 on the penultimate stage of the rally.
Outgoing Triton champion Sam Moffett (Fiesta R5) was quickest on the opening stage near Ballybofey where Josh Moffett was 3.6 seconds behind. Some of the rear wheel drive competitors revelled in the wet conditions with Donegal’s Declan Gallagher (Toyota Starlet) occupying third overall - 11.9 seconds further behind and just 0.9 of a second ahead of the Escort of Donegal’s Damien Tourish. Joe McGonigle (Mini WRC) and Donagh Kelly completed the top six. Boyle was twentieth.
Rally leader Moffett was also quickest through the remaining stages of the loop and although he had a moment on S.S. 3 when his Fiesta R5 careered up a bank, he arrived at the Stranorlar service park with a lead of 29.7 seconds. Josh Moffett continued in second place but lost time when he had to traverse most of the third stage with just two-wheel drive after a driveshaft broke.
Donagh Kelly slotted into third - 16.4 seconds further behind and admitted he wasn’t taking any chances.
Fourth placed McGonigle was content with his pace, Gallagher was fifth with Chris Armstrong (Escort) in sixth recalling a major moment on one stage.
Boyle improved his stage times and was twelfth in general classification. Meanwhile, the top ten included Jonathan Pringle (Ford Escort), Gareth MacHale (Ford Fiesta R5), Gary McPhillips (Ford Escort) and Aidan Wray (Mitsubishi). MacHale lost time when the windscreen misted over. McPhillips overshot on the opening stage and also clipped the rear of his Escort, he lost concentration on the second stage due to a noise emanating from the transmission.
Elsewhere, Darcy was down in thirteen spot and admitted that he had no grip. David Bogie (Ford Escort) retired following an altercation with a chicane bale on the third stage while Damien Tourish also bowed out with front-end damage.
On the repeat loop Josh Moffett punched in the best times on all three stages and cut the deficit to Sam to 17.7 seconds, who opined that S.S. 6 was proving difficult due to standing water and shiny tar. In terms of his Triton title bid second placed Josh admitted that he could do little more. With his Mini WRC working to perfection McGonigle slotted into third with an untroubled Kelly fourth. Continuing to set the pace in the two-wheel drive category Declan Gallagher (Toyota Starlet) had issues with the throttle cable on S.S. 6 and dropped a few seconds due to the loss of full power. Boyle was sixth and well within the Triton title target - “I am alright while I’m on the stage but when I cross the finish line I am absolutely exhausted, but I’ll keep going.”
Meanwhile, Gareth MacHale (Ford Fiesta R5) was seventh in a top ten that also included Cathan McCourt (Fiesta r5) and Escorts of Pringle and McPhillips.
Aidan Wray led Group N despite a spin on S.S. 4, his Mitsubishi EvoIX burst a front left shock absorber on the opening stage.
As Boyle went on to secure the Triton title and win the Vard Memorial Trophy for a third time, Sam Moffett took the event honours – his brother Josh lost any chance of event victory when he overshot on the penultimate stage, he secured the runner-up spot in the Triton series. Kelly, who claimed the Triton bonus point for the best time on the final stage, reclaimed third at the expense of McGonigle, who overshot a junction on the previous stage.
Declan Gallagher (Toyota Starlet) was the top two-wheel drive exponent, Armstrong took the rally.ie spoils after the unlucky Darcy crashed on Stage 8 and Wray won Group N award.