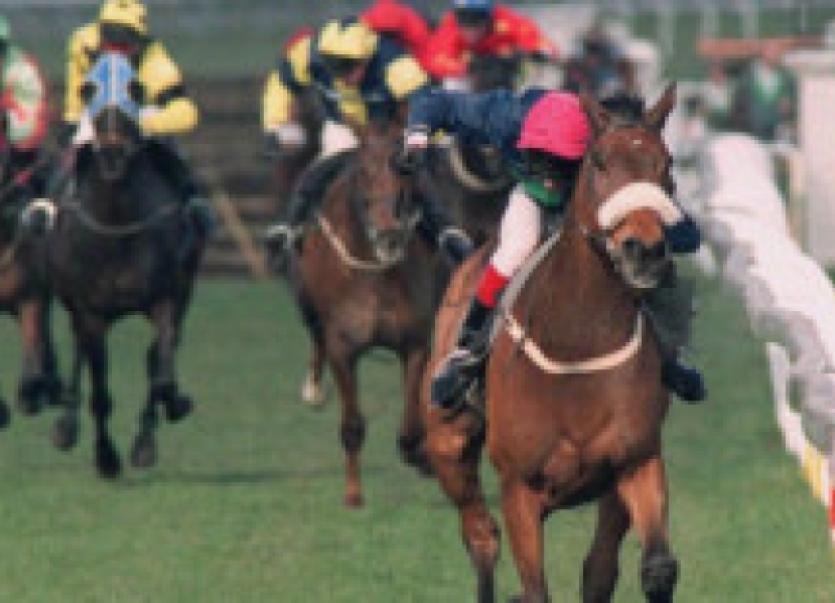 It was CNN’s Robin Oakley who coined the phrase (‘the least horsey part of Ireland’), while describing Terry Casey’s background, after the Downings man had masterminded Rough Quest’s victory in the 1996 Grand National at Aintree, only the third Irishman in 50 years, after Dan Moore (Mr What) in 1958, and Tom Taaffe (L’Escargot) in 1975, to train the winner of the world’s most famous horserace.

It was CNN’s Robin Oakley who coined the phrase (‘the least horsey part of Ireland’), while describing Terry Casey’s background, after the Downings man had masterminded Rough Quest’s victory in the 1996 Grand National at Aintree, only the third Irishman in 50 years, after Dan Moore (Mr What) in 1958, and Tom Taaffe (L’Escargot) in 1975, to train the winner of the world’s most famous horserace.

Although a talented GAA and soccer player in his youth, playing corner forward for Mulroy Gaels and on the wing for Downings, Terry always seemed happier in the ‘equine’ world. Whether with his pet donkey, ‘Mary-Ann’ (a present for his tenth birthday), or later on with his pony, ‘Melmore’, it was obvious he had a special talent.

While unsanctioned excursions from his boarding school, Colaiste Mhuire, in Dublin, to race meetings at The Curragh did not go down particularly well with the school authorities, his obvious enthusiasm for the sport caught the eye of one of Irish Racing’s great characters, Aubrey ‘The Brab’ Brabazon (famed for piloting Cottage Rake to victory in three consecutive Cheltenham Gold Cups), to whom he became apprenticed, at 15, before riding with some success for George Dunwoody (father of three-time Champion Jockey, Richard) who was based in Co. Antrim, and Archie Watson, in Armagh. Later, he made the move to England to become retained jockey at Frank Gilman’s Leicestershire stable, where among his successes were two hurdles victories on Grittar, who, coincidentally, would also go on to win the Grand National. However, dogged by injuries and having increasing difficulty in ‘making the weight’, Terry opted to accept an offer from the legendary Paddy Mullins to become head lad at his Co Carlow stable, where among the highlights of his three year stay, there, was Willie Mullins (now, arguably, the world’s greatest jumps trainer) having his first ever Cheltenham success, as a rider, with Hazy Dawn, in the National Hunt Chase in 1982. An event made even more memorable by the fact that the horse was owned by Terry’s brother-in-law, country music star Roly Daniels. Six years later, the Downings man would win this race again, this time as a trainer, with Over The Road, for John Upson who had invited him to England to set up his racing stables in Northamptonshire. Other notable wins came in the Whitbread (now the John Hughes Memorial) Trophy at Aintree, with Glenrue and in Cheltenham’s Spa Hurdle with Splendid Thyne. But it was the move to the Henfold House Stables in Surrey (owned by Andrew Wates, Chairman of Kempton Park Racecourse), and, consequently, teaming up with Rough Quest, that would, eventually, lead to his greatest triumph.

After impressive victories in the Ritz Club (now William Hill) Handicap Chase in 1995, at Cheltenham, and the Racing Post Chase at Kempton the following February, as well as a glorious ‘failure’ in the Cheltenham Gold Cup (where he finished a four-length second to the Fergie Sutherland trained Imperial Call), Rough Quest was sent off the 7/1 favourite for the 1996 Grand National. However, as only one favourite had been successful in the previous 35 years, this was not, necessarily, a cause for optimism with many observers, notably Channel 4’s John Francome, highlighting the close proximity (16 days) to the Cheltenham race. As it turned out, the 10 year old Irish bred gelding was an impressive winner with jockey Mick Fitzgerald famously telling the BBC’s Des Lynam: ‘I’ve not enjoyed 12 minutes as much in a long time. I think sex is an anti-climax after that!’

While few horses have won the Grand National with the authority of Rough Quest, for many racing insiders the Donegal man’s involvement was hugely significant. Richard Griffith of The Racing Post, for instance, points out: ‘For much of his career, when in the hands of other trainers, Rough Quest was highly regarded but something of an under-achiever, a horse whose apparent lack of enthusiasm for a fight at the finish led some disgruntled punters to doubt his genuineness. Casey dug a little deeper than his predecessors. He established that Rough Quest was suffering from an enzyme deficiency that saw him “tie up” in the closing stages of his races. The horse’s muscles were cramping, causing him to hang left in a finish. Once that problem was identified, Rough Quest began to fulfil his immense promise.’ The winning owner Andrew Wates agrees: ‘Terry was a wonderful instinctive horseman-that was his strength. He got inside the mind of horses and that was what made him so successful from limited resources. Rough Quest always had a lot of ability and Terry was able to unlock that ability.’ The aforementioned Mick Fitzgerald also highlights the Downings man’s impressive strike rate: ‘Terry was a great trainer, and always produced his horse right for the big day. His Cheltenham Festival record speaks for itself with the limited number of horses he had at his disposal.’ As The Daily Mirror’s Ken Jones says: ‘Though he was too modest to draw attention to it himself, Casey’s results outstripped those of many grander establishments.’

Sadly, less than two years after his triumph at Aintree, Terry Casey was diagnosed with throat cancer and, after a long painful battle with the disease, he passed away, aged 56, on 24 July 2001, surrounded by members of his family, at the Somerset home of his partner Johanna Williams, where he had spent his final weeks.

But that he is not forgotten is highlighted by the fact that six Irish friends, headed by Colm Herron of the Hillgrove Hotel, in Monaghan, have sponsored a race (the Terry Casey Memorial Maiden Hurdle) in his name at Sligo, the nearest racecourse to his childhood home, while The Terry Casey Memorial Golf Tournament is held at the splendid Rosapenna Hotel and Golf Resort (owned by Terry’s brother Frank), each July.