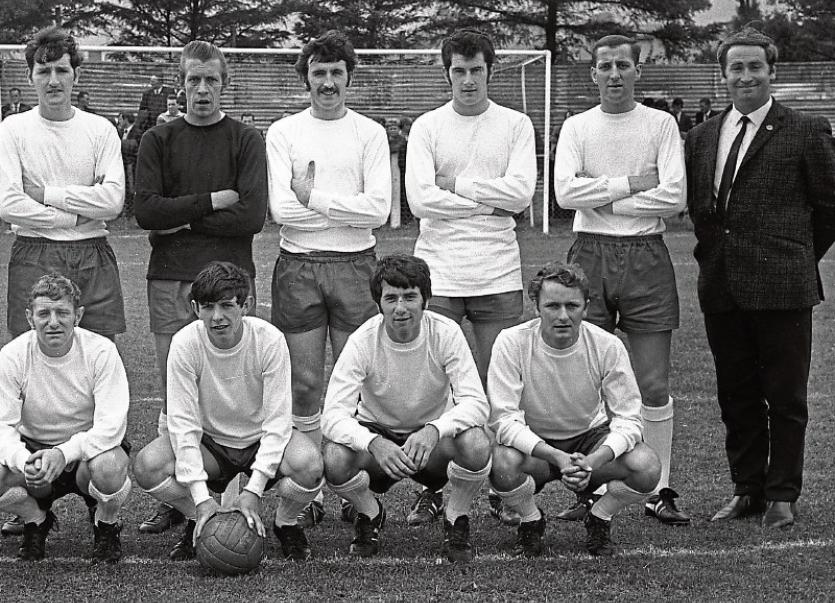 League of Ireland football was for many, many years a distant experience for Donegal football fans. Sligo Rovers was the nearest club.

All that changed on Sunday 17 August 1969 when competitive League of Ireland action came to Donegal for the first time.

Finn Harps had, in football terms, managed to clamber up Disraeli’s greasy pole. But what trauma ensued on debut day. In the Dublin City Cup the small Donegal club suffered a merciless 10-2 hammering at the hands of Shamrock Rovers in Ballybofey.

The game took place against mounting civil disorder in Northern Ireland. In Derry rioting flared at the end of the annual Apprentice Boys parade. Police used tear gas to clear hundreds of rioters and petrol bombs were thrown.

Many of the Finn Harps players, the majority of whom were Derry men, were living amid the civil strife.

The ironic thing was that Harps had been comfortable in the preseason warm-up games in which the highlight had been a 3-2 win over Jimmy Hill’s Derry City. It was Harps first victory as a senior club. The team was: Young, Leathem, Harvey, Kelly, McGarrigle, McGrory, Barclay, Wright, Norris, McDermott, Ferry. Sub: Harkin.

So no one could have guessed or seen coming the severity of the Shamrock Rovers pasting. From the dug out - I was the 12th man (only one sub in those days) – I was able to witness at first hand the havoc wreaked by the famous Dublin club. It seemed as if all the possibilities that had existed for Donegal senior soccer were buried forever under that devastating goal fest. The naysayers were predicting extinction. Gloom was in the air.

But all that was to underestimate the resolve at Finn Park, all those years ago. Down the years many fine people have followed in the gutsy tradition of those who pioneered senior soccer for Donegal; some coached, others served on boards and committees; often investing hard earned cash in the project. And many fans have kept the faith. And although there have been dark days as well, the football fairy tale refuses to go away.

The follow on from the annihilation by Shamrock Rovers was remarkable. A 10-2 laceration on day one would flatten most people. But not the football enthusiasts of Donegal.

In a remarkably gritty fight back the Finn Park foot soldiers would not lose again at home until the last home league fixture of the season when Waterford won 4-2 to clinch the title. Indeed, in that same campaign, Harps themselves created one of the season’s biggest shocks. The early season runaway leaders Dundalk were hammered 6-2 in Ballybofey in mid December. The result caused almost as big a sensation as the 10-2 lashing.

I remember the game distinctly; I was operating at left back, directly behind our wide left player Sean Coyle. Sean, a schoolteacher from Derry, had an outstanding game. He tormented the right side of the Dundalk defence, scoring twice; and having a hand in two of the other goals.

Training in those early days took place in the Brandywell Showgrounds. On one occasion the squad had just begun the pre-training warm-up and were cruising gently around the periphery of the playing area when a loud, frightening burst of gunfire erupted somewhere in the surrounding streets. It prompted Colm Norris, who had played in the same Northern Ireland youth team as the great George Best, to pose a question for trainer Bobby Toland. ‘Bobby,’ he inquired, ‘would it be preferable if we did the press ups now?’

It was in that surreal atmosphere – going to and from training through heavily armed checkpoints, the sound of distant gunfire and bombs occasionally going off – that Harps worked out in their early League of Ireland years.

The Shamrock Rovers catastrophe at the start of the 1969/70 season was down, in great part, to inexperienced management. It wasn’t that the players were inferior, rather it was in the main a lack of organization in the team play that did the damage.

Manager Patsy McGowan had to learn quickly. He had the advantage of being surrounded by very experienced players, and their input helped accelerate the learning process. Two players in particular had great leadership qualities: Brian Wright and Jimmy Nicholl.

One of the immediate changes was the introduction of a ‘libero’. I was the man nominated for the sweeper role. I was given the task of a free man patrolling behind a man-marking back four. What I didn’t know then was that we had accidentally stumbled upon the system the Italians call catenaccio, a sweeper in the most suffocating defensive strategy you could imagine.

It brought us immediate results and more importantly, stability: we lost the next game, only 1-0 at Drogheda (an own goal) and then beat Shelbourne 1-0 in Ballybofey; Harps first competitive win in senior football.

It wasn’t practical, however, to continue with a system so deeply defensive but it had given the club the opportunity to get adjusted to the faster pace of senior soccer and to grasp the organizational requirements so crucial at senior level.

There was an amazing response off the field of play to Harps’ entry into the League of Ireland. Huge crowds came to Finn Park and many people were inspired by senior soccer to such an extent that within a few years the Donegal and Inishowen leagues came into being and later the Ulster Senior League was established.

Indeed such was the burst of enthusiasm at under age level that within a decade the Donegal League’s youth team had won the National Inter-League Championship with a goalkeeper, Packie Bonner, who would go on to play in the quarter final of the World Cup. And many more young Donegal men would gain international recognition at various under-age levels. Harps had changed Donegal football, forever.

Harps also introduced to League of Ireland football a goal scoring genius who would become a legend. Tall, lean hit man, Brendan Bradley is the greatest goalscorer of all time in the Republic of Ireland’s senior league. There’s been almost a hundred years of League of Ireland football and during that period Dublin with its vast population hasn’t been able to produce a player the equal of Harps ruthless matador. And yet this is a man unsung in the county.

The big fellow got most of his goals while wearing the blue of Finn Harps. No one has so far matched his prolific scoring record in the Republic’s senior game.

Not even the great Jimmy Dunne, who scored 228 league goals (52 in the League of Ireland), and whose best season was 1930/31 when he struck 41 times for Sheffield United. Derry man Bradley bagged 235 league goals, mainly in the colours of Finn Harps but also at Sligo Rovers, Dundalk, Athlone Town and Derry City. He also found the net 12 times with English league side Lincoln City, leaving his overall tally of of league goals at 247. Bradley was the League of Ireland’s top scorer four times.

When Derry City surprisingly let him go the young, embryonic centre-forward moved to Finn Harps for a ridiculously low fee of £100. Has there ever been a better bit of business in the League of Ireland?

I asked him once what was the best goal he ever scored? ‘It was against Shelbourne,’ he said. ‘Terry Harkin played it through and the goalkeeper Paddy Roche came out. I lifted it over his head, the full back came across and I flicked it over his head as well, and before the ball hit the ground I volleyed into the goal.’

The first significant piece of silverware won by Finn Harps was the Dublin City Cup in 1972. Two years later in 1974 came their greatest achievement – a 3-1 win over St Pats in the FAI Cup final. Charlie Ferry scored in every round. But manager Patsy McGowan’s decision to press Tony O’Doherty into action in the final after the Derryman had missed most of the season through injury was a key manoeuvre. O’Doherty, who had won two Northern Ireland caps, came to Finn Harps when chairman Fran Fields persuaded 40 local business people to donate £100 per head to cover the £4000 transfer fee demanded by Coleraine.

There’s been other successes as well. Four times in the 1970s Harps played European football.

From the mid 1980s Harps fortunes fluctuated. They spent several spells in the First Division. They did win a piece of significant silverware during one of those fallow periods. Under Felix Healy’s leadership they were First Division Championship winners in 2004.

Harps are currently a Premier Division club. They’re battling for survival in the top flight. I think they can avoid relegation

My optimism is based on the leadership of manager Olly Horgan and his assistant Paul Hegarty. Olly and Paul are football men. Real, genuine football men. They have the kind of desire those early guardians of club exhibited. Despite a lack of resources in comparison to most of the rest of the league their leadership and recruitment has been brilliant. Cling in boys; it’s always been that way at Finn Park.