Endurance cyclist getting better with age 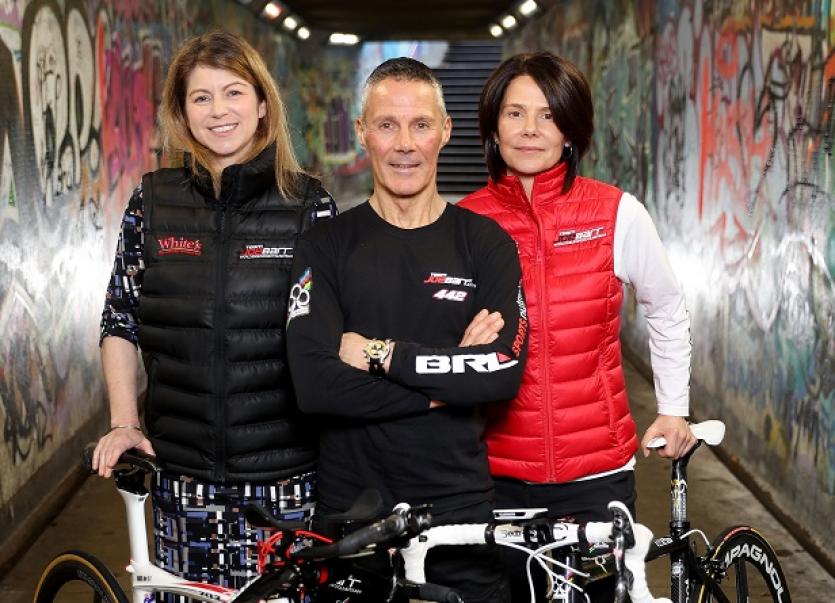 Irish ultra-endurance cyclist Joe Barr launches 2020 season and named as best in the world in age category.
Following a record-breaking year, 60-year-old world ultra-endurance cyclist, Joe Barr, has recently been crowned the winner of the 2019 World Cup, which is the World Ultra-Cycling Association’s most prestigious award.
At the launch of Joe’s 2020 season, it was revealed that Joe’s 2019 season has lead to a number one spot in his age category (60-69) and perhaps even more impressive a runner-up podium position in the Overall (all age groups) World Cup.
Demonstrating that age is no barrier in the world of ultra-endurance cycling, Joe’s podium positions are based on a cumulative average speed over three different kinds of ratified World Ultra-Cycling races; a 12-hour, a 24-hour race and a 1000+ mile race. Over the three qualifying races, Joe cycled close to 4000 miles with a cumulative average speed of 17.31 miles per hour.
At the launch of Team Joe Barr’s 2020 season, their most ambitious yet, Joe announced his plans to return to Race Around Ireland in August, Sebring 24 hour in February, Race Across Italy in May, the US based Race Across the West in June and competing in a 6-12-24 hour championship in November to round out the season with the overall goal being to take the top spot in the Overall World Cup of Ultra-Endurance Cycling 2020.
“2019 has truly been an incredible season for Team Joe Barr. Despite turning 60 in June, my passion for endurance racing has only grown stronger,” adds Joe.
He continues: “From setting a World Record for East to West cycling in Ireland to completing Race Across America in June, this past year has been filled with important milestones for the team. Looking back at all the successes we have accomplished in the past year; I am excited to get back on the saddle and achieve even greater success for Team Joe Barr in 2020.”
With a long history in cycling, 10 years’ ago Joe was spurred on to take part in the 2,200km non-stop Race Across Ireland to raise funds for charity, following his young son’s cancer diagnosis. Joe won Race Across Ireland in 2009 and since then he’s accumulated more than 250,000 miles, with Team Joe Barr being recognised as one of the world’s most elite endurance cycling teams. Should Joe take the top stop in Race Across Ireland in 2020, he will become the first person to have won the race three times.
Kicking off his 2020 Race year at Sebring 24 hour in February, next year will see Joe taking on the 500-mile Race across Italy (May), the 930 mile Race Across the West (June), the 1630 mile Race Around Ireland (August) and the 6-12-24hr Championships (November).
Team Joe Barr includes Performance Nutritionist Jillian Mooney and Crew Manager, Alan Hamilton, with the support of sponsors includes in the Title position White’s Oats followed by Powerhouse Sport, BRL Sports Nutritio, Xentis carbon technology wheels and Zoocreative.
Announcing its Title Sponsorship with Team Joe Barr for 2020, Danielle McBride, Brand Manager at White’s Oats adds: “Joe and his team have had an amazing year, putting Ireland and Irish cycling on the map globally, and White’s Oats was privileged to be part of Team Joe Barr’s journey in 2019.
“The commitment that Team Joe Barr demonstrates to preparation and performance is incredible and for the 2020 season, we're delighted to come on board as Title partner.
“White's has been producing multi award winning porridge oats and oat cereals for 178 years, providing quality natural nutrition to athletes like Joe and in 2020, we very much look forward to supporting Joe and Team Joe Barr in reaching further.”
Originally from Donegal and now living in Limavady, Joe is one of Ireland’s most successful athletes, with a career that spans over 45 years, and having won over 500 races throughout his amateur and professional career.
For more information on Joe, his career or to get in touch with Team Joe Barr, see www.teamjoebarr.com or follow the team on @TeamJoeBarr on Facebook.