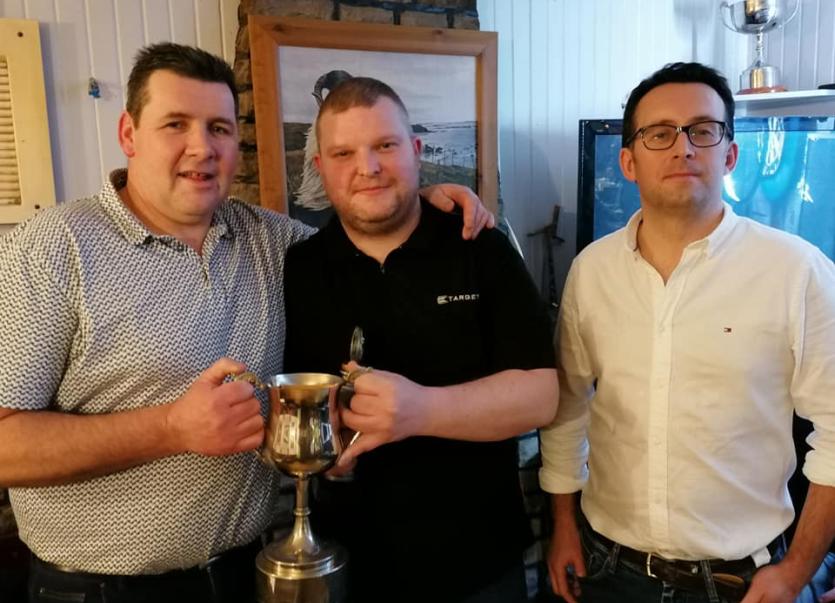 Stephen Harron added his name to the prestigious Con Sean Cup following a 6-2 win over three times winner John Con McGinley in Evelyns in the 2020 final on Saturday.
Harron threw great darts all evening and was a deserving winner. This year’s tournament was held between Evelyn’s and Ostan Sliabh Liag for the first time in the 22 years history of the event and proved a great success with six boards in play for the first time, 58 players entered.
Beaten in the semi-finals were holder John Menchia and Tom Kirby-runner up Liam Gallagher while the highest checkout was by John Con McGinley which was a 154 against Owen Carr in the quarter final.
Thanks to the board sponsors Conor McShane, Francis McShane, Claire McShane, Joe Byrne, Top Nets and Sliabh Liag Boat Trips.
Thanks to Evelyn's and Hegarty’s for hosting the event for the first time.
There was also a raffle on the day for the new playground where €505 was raised thanks to all who sold and bought tickets and thanks to the following who sponsored prizes Carrick Chinese, Carrick Meats, Byrnes Foodstores, The Workshop, Doherty’s XL, Evelyn's Bar, Ostan Sliabh Liag, O’Donnell’s Bar, Kilcar House, Áislann Chill Chartha and Kelly’s Kitchen.