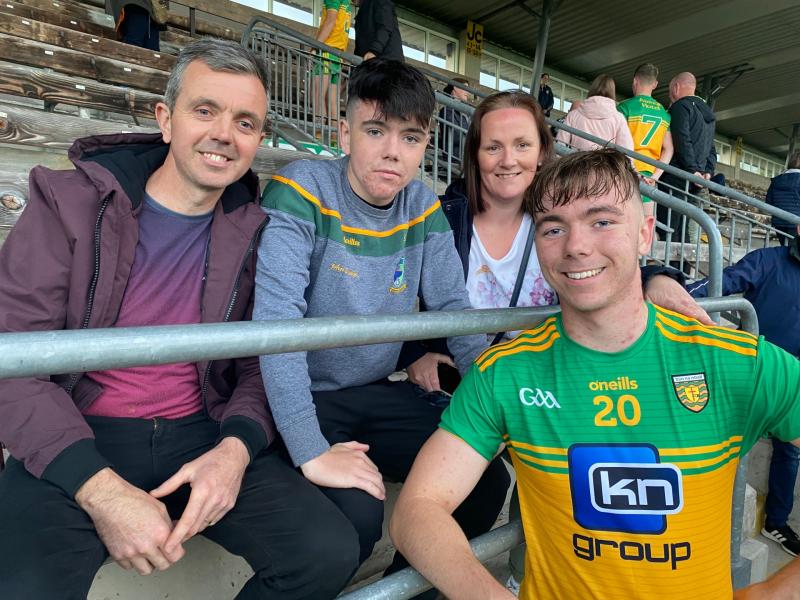 Naomh Columba’s Michael Callaghan was summoned from the bench in Donegal’s Electric Ireland Ulster U-17 preliminary round win over Antrim to kick 1-3.

Luke Barrett’s team were very comfortable on the night in Ballybofey, running out 4-22 to 0-8 winners to set them onto a quarter-final at St Tiernach’s Park in Clones against Monaghan.

Callaghan was sprung again on 39 minutes and the scene couldn’t have been more contrasted than seven nights’ beforehand. Donegal were a man down, following the sending off of Ethan Friel for two first half yellows and then a point down, 0-8 to 1-4, with Stephen Mooney finding his groove for Monaghan in the No 11 shirt.

Donegal, though, didn’t panic and after Luke McGlynn brought the sides level, Callaghan kicked two vital points for the 14 men, before another substitute Gary Kelly, also scored and in a frantic finish were 1-9 to 0-10 winners.

“We’re over the moon,” Callaghan said afterwards. “It wasn’t easy going in at half-time a man down but we stuck to the gameplan and knew we had to work extra hard then for the rest of the game. That’s what we did and we came through. We’ve been well-trained and are built for that.

“Monaghan went ahead with their purple patch just after half-time and we just had to make sure we kept playing our own game. That’s what we did. It paid off in the end. I was just hoping to get the shout. I’m happy to come off the bench and contribute in any way I can.”

One of the notable things in Clones was the collective spirit shown by Donegal, a fine trait considering the disruptions last year’s U16s and this year’s U-17s had to endure. They look like they’ve been together for years. They’ll need that for Friday’s semi-final against Ardara at Healy Park.

“We’d only one game last year and no league this year,” Callaghan added. “We don't have too much championship experience but we’re coached well and are ready for it. The preliminary round can stand to you. We got the nerves out of the way early in that match and even there, you could see from the word go it took Monaghan a bit to get going. Maybe they were the ones who were a little nervous to begin with.

“We don’t know too much about Armagh but we’ll be well-prepared by the time the game comes. There’s exciting times ahead and hopefully we can keep this run going now.”