Carndonagh impress to see off Letterkenny Gaels in style 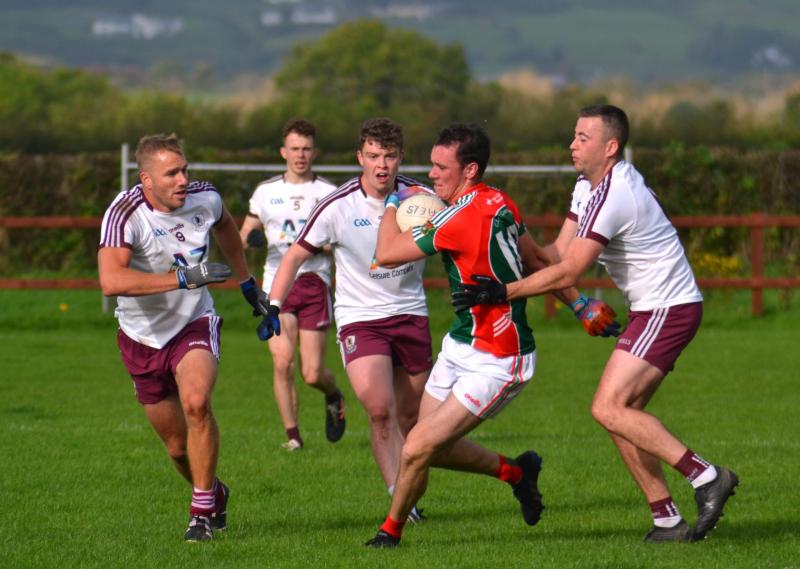 Donal Doherty of Carndonagh breaks away from a swarm of Letterkenny Gaels players at Foden on Sunday. Photo Annette Canny

Division 4 champions Carndonagh used the elements to their advantage to post an unassailable lead at the interval and intelligent management of it thereafter.

Unbeaten all season - the only side in the county left with that particular claim bar Naomh Conaill - the Inishowen team progressed straight to the semi-finals of the Junior A football championship.

Their victory over a Letterkenny Gaels side who have made it to Division 2 for the first time in their history was emphatic.
Conor O’Donnell and Ryan Kelly completely dominated midfield and in the first half with the wind at their backs, Carndonagh went in 1-10 to 0-1 in front at the break.

Some of the visiting support couldn’t believe their eyes, with the side from the Cathedral Town having shown some great form themselves this season.

Kelly scored the opening goal in nine minutes when he finished a pass from Donal Doherty and O’Donnell, as well as Christy McDaid, scored some eye-catching points from distance.

After the break, Carndonagh opted to push up when faced with the wind and Gaels didn’t manage a second score until the 47th minute, when Sean McDonagh netted. That resistance was key to victory, as was a bit of local knowledge.

For Gaels, who now face into a quarter-final, it was far too much for the visitors to chase and Carndonagh saw the game out having added a second goal through Eoghan Kelly, who smashed into the top corner six minutes from time.