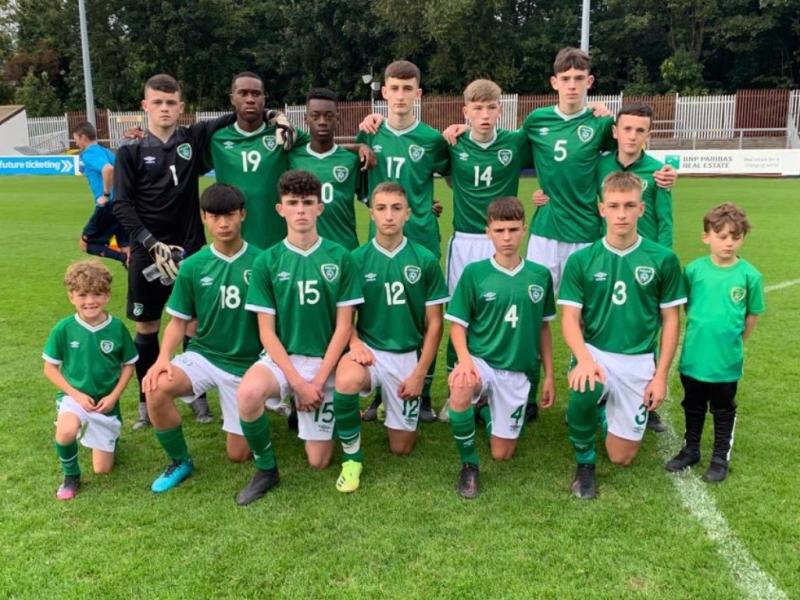 The boys in green were edged out 1-0 in the second of a double header of friendlies against Poland in Richmond Park. Midfielder O’Donnell is a former student of St Oran’s NS, Cockhill, and is on the books of Derry City.

A header from Szymon Krolak just before half-time was enough to give the visitors the win in a closely fought encounter in Inchicore.

Ireland were the brighter team in the early exchanges. Full-back Olaf Boruc stung the palms of Mateusz Jelen and it would be the Polish goalkeeper who would be the busier of the two keepers in the game.

Midway through the first half Ireland created a great chance. Centre-back Luke Mulligan found himself free at the far post and took a fine touch to compose himself, however the Dundalk defender was only able to find the side netting with his effort.

Minutes later Denzel Obenge had a glorious opportunity. The Cork City forward took advantage of a misplaced clearance and sold a dummy to the defender but his strike struck the foot of the post and Bez Agbontaen was unable to capitalise on the rebound.

The breakthrough came right on half-time. A deep corner was swung in and Krolak headed home despite Jack Ellis’ best efforts to keep it out.

Ireland almost equalised immediately after the break. Agbontaen tricked his way past the defender and found Luke O’Donnell on the edge of the area. His curling effort looked destined for the top corner but for a fantastic save from Jelen.

The hosts kept coming and substitute Richard Vodo saw his effort go narrowly over in the 63rd minute then a minute later he had another attempt following a smart turn, that flashed over the bar.

There were shouts for a penalty for the home side when Agbontaen appeared to be tripped inside the area but the referee waved on as Ireland kept up the hunt for an equaliser.

Ellis was called into action in the 66th minute when dangerman Krolak’s low drive forced the Ireland stopper to deny him with his feet.

Poland thought they had a second in the final minute when Mateusz Szczepaniak’s wide free-kick appeared to go all the way in but the assistant referee adjudged there to be an offside in the play.