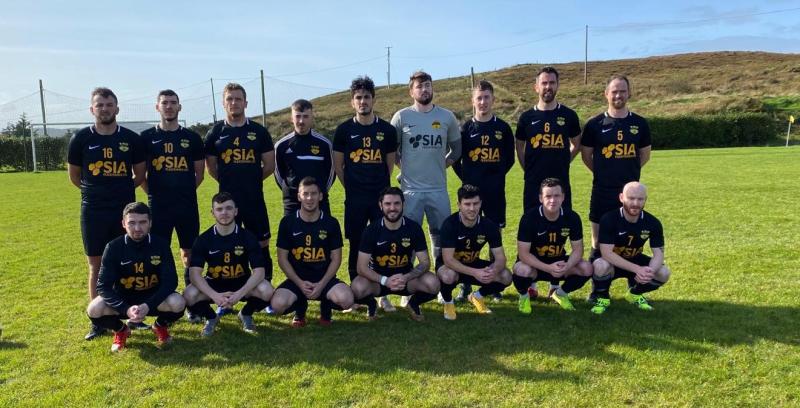 Glengad United go to Donegal League Premier Division title hopefuls Kildrum Tigers in the FAI Junior Cup on Sunday with the reward for the victor a place in the open draw of the competition.

A dearth of entries from Inishowen and Donegal League clubs (eight in total) means the county will have just one representative in the next round.

Glengad were Junior Cup semi-finalists in 2019, losing out to St Michael’s in Tipperary.

While the dreams of a run in the competition are fluttering again, any potential long journeys won’t daunt the new Glengad manager Patrick McGrenaghan.

The successor to Shane Byrne - who led a trophy-laden reign for the club - at The Crua, McGrenaghan’s path hasn’t been the conventional one.

A Sports Coaching and Performance graduate from LyIT, the Culdaff man spent a summer working at two academies in Hungary.

Initially working at Debreceni VSC, who compete in the top tier in Hungary, McGrenaghan moved to another Nemzeti Bajnokság I club, Puskás Akadémia, based in Felcsút.

“That was excellent,” McGrenaghan told The Inish Times. “I was lucky to get to work with two academic our there.

“Debreceni was more of a come-and-watch experience. At Puskás Akadémia, my role was to go help the kids and the coaches with ‘football English’.

“They’d have learned English in school, but this was the football language.

“I spent time with the under-14s mainly. It might have been taking a warm-up, maybe doing a presentation on something based on what the coach was working on. It was a great experience.”

McGrenaghan also spent a summer working on summer camps in America, spending time in various posts around Chicago and Detroit.

He worked alongside Byrne with the LyIT senior men’s soccer team in recent years and his ascension to the manager’s job at Glengad certainly looks like the right fit.

He said: “We have a good squad assembled. Everyone is pushing each other on.

“The club is very good and are there to support us. I have good people around.

“We have new management and a change of manager and we’re doing quite well again. The performances have been really good. We were finding it hard to hit the back of the net, but we’re doing that now.”

The experience of Michael Byrne will be missed again this weekend as a calf injury continues to keep him sidelined.

Glengad have added the likes of Brandon Browne, Lee McColgan and Reece McGilloway to their ranks.

McGrenaghan said: “We’re happy with where we’re at and there are plenty of experienced boys in the dressing room.”

McGrenaghan has Lee Faulkner alongside him on the line. Glengad stalwart Denis McGonigle is there too with physio Megan Doherty and statistician Liam Mooney completing the backroom.

A 2-0 win over Fanad United in the last round set Glengad up for a tilt at Shane McGinty’s Kildrum, whose strings are mainly pulled by former Finn Harps star Kevin McHugh.

McGrenaghan said: “Kildrum will have plenty of experience and quality. They’re a good side. The boys would know them from playing against them before. We just have to do what we’ve been doing. This is basically a Cup final in the Donegal section.”