Donegal’s young guns will never get a better chance of staking a claim to more permanent places, than in the Dr McKenna Cup.

That is the firm message from ex-Donegal great Barry Monaghan as Donegal take on Antrim in Portglenone on Saturday, following on from their opening round victory over Down.

“It is a great opportunity for young lad to make an impression”, said former Donegal captain Monaghan. “The Dr McKenna Cup has its critics, but it is a very worthwhile competition and is even more important these days as it helps lift the mood of the whole country.

“But it is a more forgiving competition than the NFL and the Championship and presents an ideal chance for these young lads to make their mark.  And it is heartening that Declan has given chances to so many young players as was apparent against Down and it was a pretty good competitive match and a good opener.

“But it is great generally for people to get out and about when we have so much of this Covid about. Football lifts the spirits of people in general and there has been no county action since last summer so players will be extra keen to see some real action.” 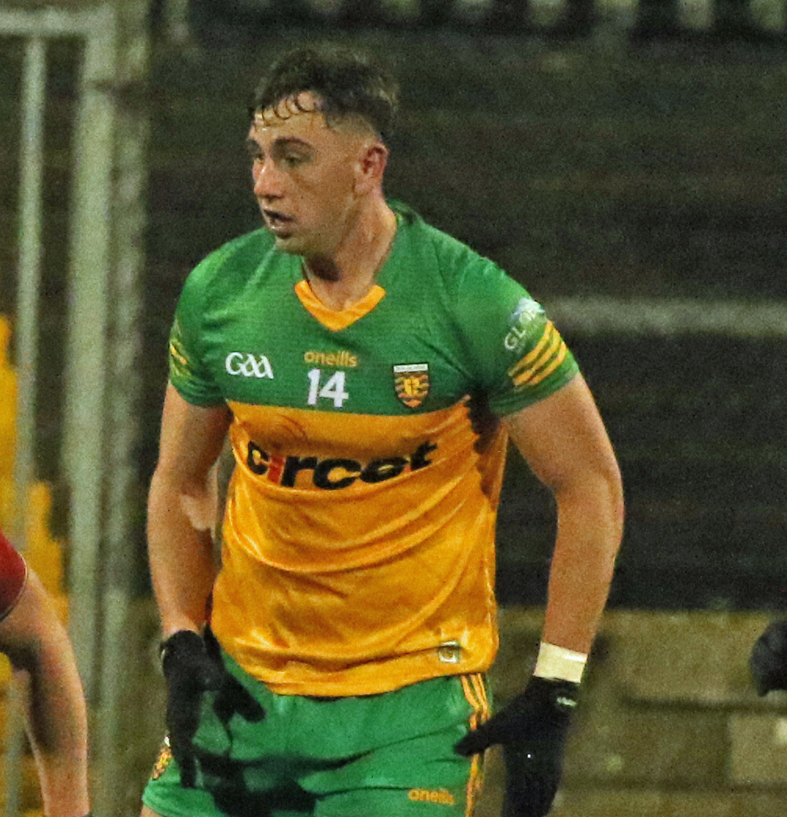 Charlie McGuinness in action for Donegal against Down on Friday

Monaghan lifted the Dr McKenna Cup in 2009 under John Joe Doherty, although Donegal failed to make a significant impact on the championship. These days the season opening competition is used in different ways but its participant and Monaghan still thinks it can be used well.

“The Dr McKenna Cup is a secondary competition, but it serves and has served a very good purpose for Donegal and many other counties,” he added. “Declan has brought in quite a number of new players and on the other hand there may be more senior players who may be carrying knocks and may want to ease their way back in.

“So overall it is a very useful competition for many reasons. Of course, the first big game is the NFL opener against Mayo in Markievicz but this is ideal preparation. All teams are doing a lot or physical conditioning and training. But there is nothing players like better than playing matches and this competition gives them a chance to develop their ball handling skills after a long lay-off”.

Monaghan does not believe that winning the competition is a priority. Experience, for now, is the important thing.

“Tyrone have certainly made a huge impression on this competition and won it quite often,” he added. “But winning it is no big deal really as its main function is for counties to look at what they have on their bench.

“Competitive matches are always much better than challenge matches. Personally, I am really looking forward to the start of the GAA season. And it will be only a few weeks before we take on Mayo so that is something else to be looking forward to as well. But these are the days when the young lads can really make their mark and it is great that we have so many coming forward”.