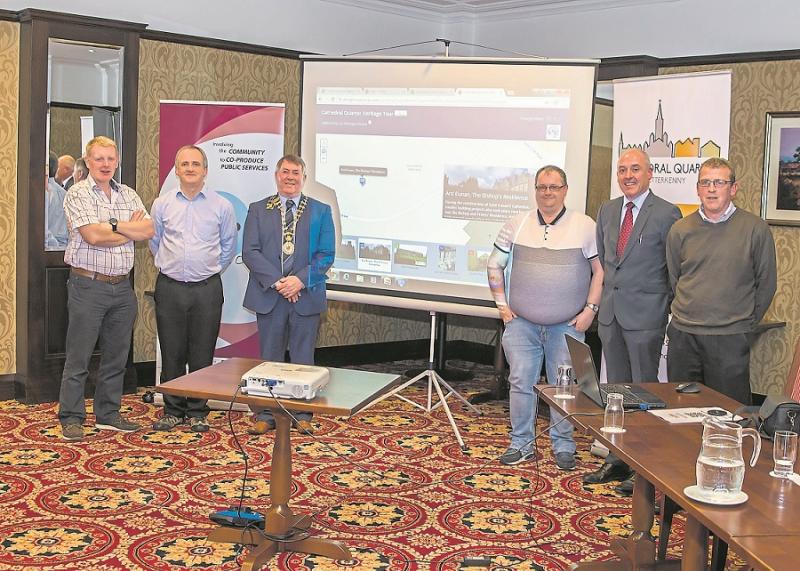 Caption information at bottom of page

The collaboration between the Letterkenny Cathedral Quarter committee and Donegal County Council has produced the Heritage Map App, a self-guided tour of local landmarks, in an initiative developed under the EU-funded Improve project.

“It’s the product of cooperation between Donegal County Council and ourselves under the Improve project,” Donnan Harvey, secretary of the Letterkenny Cathedral Quarter group, said.

The app’s Cathedral Quarter Heritage Tour gives viewers a map of the Cathedral Quarter area dotted with 20 numbered points, each representing a location of historic interest. Each site is depicted in a colour photograph below the map, and when app users click on a photo, a history of the location appears on the screen.

The map tells the story of such locations as St. Eunan’s Cathedral; Mount Southwell, Market Square; Gospel Hall, Church Lane; Methodist Hall; and Laird Hotel and the capture of Wolf Tone, among others.

Mr. Harvey said they are translating the app into Irish and hope to translate it into French, German and other European languages, “so tourists can explore Letterkenny and find out about it in their own language”.

They are also applying QR codes – those bar codes made up of a black grid against a white background – in shop and business windows in the town, so that QR scanners on smartphones and other devices can read the code and bring up the map with its guided tour.

The project was a joint effort, with John Nee of the Cathedral Quarter group photographing and researching sites of interest; historial Kieran Kelly of the Letterkenny Historical Society checking the local histories; and Daragh McDonagh of the county council converting the information into a mapping system for the app.

In launching the app, Cllr. McMonagle also credited the Cathedral Quarter committee for the work they have done to promote the area.

“There has been an awful lot of work done these last couple of years and they’ve taken it from a dream in a meeting room in Gallagher’s Hotel one night – now they’ve been hosting literary events, general talks and now we have this app, a fantastic addition to what they are trying to do," he said. The Cathedral Quarter group also commissioned the mosaic mural of the Cathedral Quarter group logo for Church Lane, that sits on a building wall just at the junction with Letterkenny Main Street.

Cllr. McMonagle said this latest project, “is literally putting the Cathedral Quarter on the map, and also the app.”

Mr. Harvey said the project was all about partnership, saying local hotels and other businesses could now promote the app for use by visitors and guests at their establishments.

“It’s all different community groups working with the local authority to make the place a better place, everybody pulling in the same direction,” Mr. Harvey said. “And this is an example of it.”