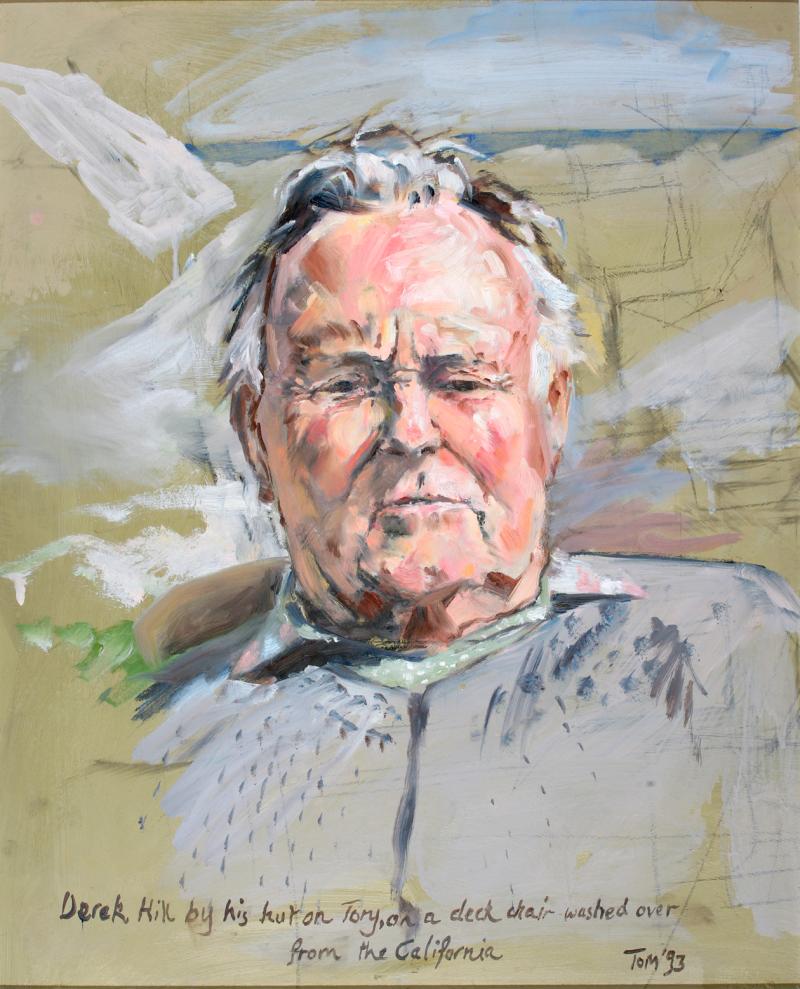 Portrait used with the kind permission of Tom Halifax

A  gifted landscape and portrait artist, Derek Hill is being remembered in a legacy exhibition at the Glebe Gallery.

Last weekend, RTÉ Radio One presenter, John Bowman’s Sunday morning archive show featured a selection of interviews relating to Derek Hill which had been recorded over the course of many years.

Read also: Maintaining a rhythm of devout prayer and reflection at Lough Derg

In an interview with Myles Duncan, artist Anton Meenan from Tory Island recalled the first time he met Derek Hill as a 16-year-old.

The English man had a great love for mackerel and Anthony’s mother had sent him to the hut with some of the fish to give to the artist.

When he arrived the artist was outside  painting a large landscape which impressed the young Meenan. Bloody Foreland was the main part of the landscape and the  16-year-old admired it.

Hill told Meenan that he too could do the same thing.

“And, he said to me ‘well you could do that,’ I hardly did any sketching or painting at that stage but he said ‘you could do the same if you wanted to’ which I thought was very encouraging,” Anton said.

Hill later organised an exhibition in Belfast for the Tory Island painters.

He would come and go to the island for many years. He had a hut at Greenport on the Irish speaking island.

Meenan recalled that when he arrived on Tory he would look at all of their paintings and encourage them to do better.

The painter said that Hill would not make any critical remarks about their work but would rather help them recognise where they  had gone wrong.

He would also bring gifts of brushes and paint for the aspiring artists.

Read also: Inspiration children show great care and love for wee baby Livie as they make it their goal to raise money

On Rattlebag, James Murphy said that Derek Hill had initially been invited to the island by Henry McElhinney who wished him to paint his portrait.

“He was an all-round painter. He painted portraits and  landscapes. He  came across a group of painters on Tory island.  He painted a picture there and one of the artists said ‘I can do better than that.’   Derek said to him right and invited him to and he became friendly with him and other artists.

Murphy described Hill as being an ‘extraordinary artist.’ Agile in his talent he could paint landscapes and portraits.

Speaking on RTÉ, Pat Murphy from the Arts Council described the artist as classical adding that he painted landscapes ‘in a very representative style.’

He said  the artist was one who enjoyed monochrome and browns.

He painted many prominent figures, including the late RTÉ broadcaster Gay Byrne,  and he always tried his utmost to create a very good likeness.

Despite the fact that Hill was born in England he was regarded as an Irish painter.

He spent many years on Irish soil.

However, he was not happy that he was never included in an Irish exhibition.

He said: “Well, all I think is I am a painter. I’ve never been included in an exhibition of Irish painters, ever, because the Irish, on the whole, haven’t thought of me as Irish.

WATCH: video which tells the story of a well which is said to have a cure to a common ailment

In 1981, he donated his home, St. Columb's Rectory, near the village of Churchill, which he had owned since 1954, along with a  considerable collection including work by Pablo Picasso, Edgar Degas, Georges Braque, Graham Sutherland, Anna Ticho and Jack Butler Yeats to the Irish State.

A retrospective exhibition was arranged for and by him at the Royal Hibernian Academy in 1998.

In 1999, he was made an honorary Irish citizen by Irish President Mary McAleese.

He is buried in Hampshire in the South of England with his parents. Memorial services were held for him in Dublin at St Patrick's Cathedral, as well as St James's Church, Piccadilly, London, and his local church in Trentagh.

An exhibition of his work and personal art collection can be seen at the House and associated Glebe Gallery at Churchill.

As restrictions are currently easing, please check their website for visiting times and guidance on visiting.