A three-wreck dive for Sheephaven SAC 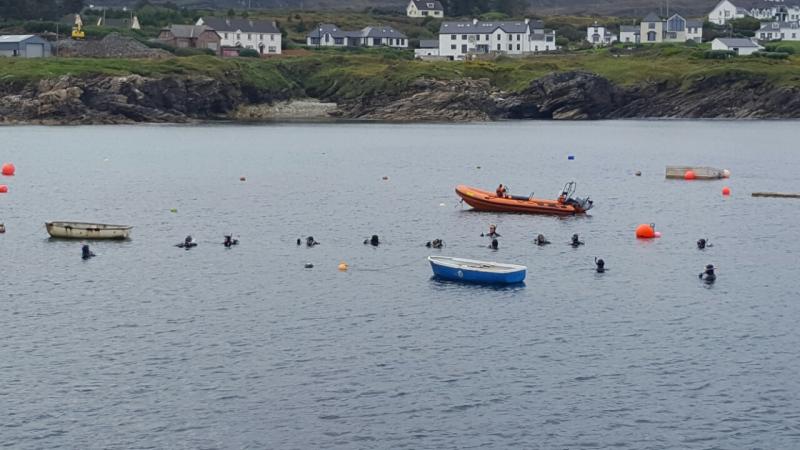 The settled weather over the previous week has brought optimum diving conditions back to Donegal with the perfect combination of calm seas and clear water.
Saturday morning's dive was a three-wreck affair, when Kevin Boylan led a dive party to Cranford Pier for a shore dive out to the nearby wrecks.
Under a clear blue sky, the divers swam out to the location of two wrecks which are effectively joined together on the seabed and sitting upright at a maximum depth of 12 metres.
One of the wrecks is large wooden trawler, possibly a 50-footer, while the other is a steel vessel with a large open hold.
Both of these wrecks are completely covered in marine life, specifically sea squirts that cover every part of the outside of the vessels.
Inside the wrecks there is a layer of fine sedimentation, which rises up in a cloud if the divers are not careful with their buoyancy.
Once the divers had completely checked out the first two wrecks they then followed a compass bearing across the harbour to the third wreck, which also lies upright and in no more than 12 metres.
It is also a wooden 50-footer, but unlike the other wrecks there is no marine life on the anti-fouled portion of the hull, a worrying testament to the lingering effects of old fashioned anti-foul paint from the past. Thankfully modern paints are not as pervasive and will eventually lose their long-term potency, limiting their environmental impact as a consequence.
After the third wreck was inspected the divers returned to Cranford Pier, once more relying on their compass bearing for direction. The dive surface-to-surface time was nearly 60 minutes in comfortable water temperatures of 15 degrees Celsius and reasonable in-water visibility of around 10 metres horizontally.
Sunday morning's dive was a search and recovery training session in Portnablagh Harbour, one of two mandatory sessions that each unit member is required to attend annually.
Sheephaven Search and Recovery Unit is one of number of volunteer S&R units around the country that provides assistance to the civil powers in the event of a water-based tragedy.
They are called out at the request and under the direction of the Irish Coast Guard, but in doing so all divers must be registered with the Irish Underwater Council as suitably qualified and active divers.
Two separate exercises were conducted with Damien Kelly providing shore marshal cover, with a swim line of divers completing a circuit of the harbour in one group, while separately two divers used full-face masks in another dive team.
To make the morning even more interesting, a series of golf balls were strategically hidden throughout the dive site, with the divers expected to the recover them during the exercise.
As impressive as it was to watch the divers conducting a tightly controlled swim line, what beat it on the day were the wonderfully clear waters in the harbour on Sunday morning.
From the top of the pier the divers could be easily observed in the water, which was a fantastic spectacle for those watching the exercise from the shore.