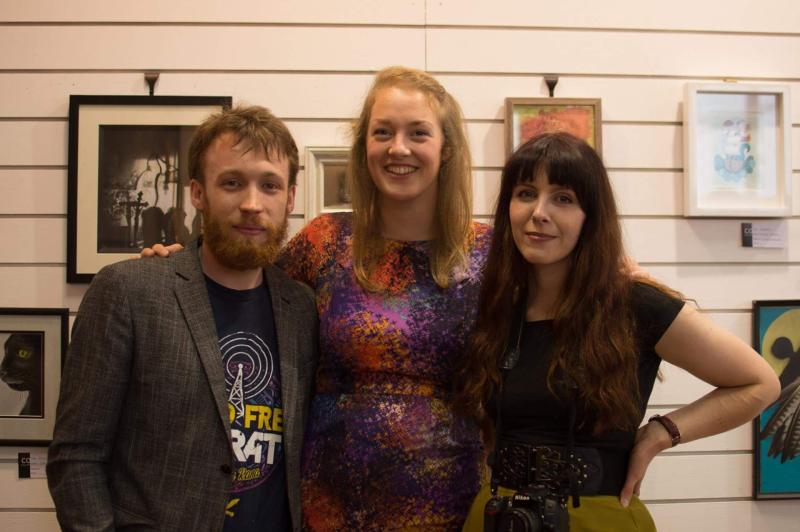 At the opening of the Art Dogs exhibition, from left, Kieran Devlin, Ineke Abbas and Layla Kuyper. Photo Brendan O’Donnell

A month-long creativity challenge spurred dozens of people from across Ireland and abroad to create more than 1,500 pieces of art.
Now, a selection of the work that was created in the Art Dogs 30-day Creativity Challenge last month is on exhibit at ArtCo Gallery in Letterkenny.
The Art Dogs 30-day Creativity Challenge exhibition runs at ArtCo until November 9th. The gallery is open weekdays from 10am to 5pm.
More than 40 artists from around the country are showing work in the exhibit, just part of the huge body of work that the challenge generated.
The challenge was the brainchild of Ineke Abbas of Gaoth Dobhair and Kierean Devlin of Letterkenny, who came up with the idea in April of this year. Kieran wanted to get better at drawing and Ineke suggested drawing every day.
“A few minutes later we had thought up the basic idea for a month-long art challenge,” Kieran recalled. They decided to create an art work every day in April, based on a daily theme that a friend would provide them.
”The challenge was to create a piece of art within 24 hours and post it to Facebook,” Kieran said.
Once they involved Facebook, the challenge received so much attention that they decided to run a poetry challenge in May, this time inviting others.
This is where the online magazine Art Dogs came in. Ineke contacted Art Dogs’ Layla Kuyper of Letterkenny, to show their work and explain what they had done.
“She was interested in including us in their magazine and to run another challenge for the month of September and to include all mediums, which we were psyched about,” Ineke said.
The newly formed online community that grew from the challenge soon saw people commenting on each other’s work and offering words of encouragement.
“It was nice to see how other people approached a common theme,” Ineke said. “Opening your browser in the morning was so exciting – you never knew what to expect.”
ArtCo in Letterkenny offered to host the exhibition. The exhibition opened this past Sunday, giving artists a chance to meet each other after weeks of online communication. People brought food and drink to the event, adding to the community feeling. Joleen Kuyper, Anna Mae and Ciaran Cunningham gave readings of their poetry and the Ukulele Orchestra of Letterkenny played a few tunes.
”Art Dogs magazine has always been about bringing people together, and finding artists who may not have shared their work before,” Layla Kuyper said. "It was a wonderful opportunity for all kinds of people from all walks of life to come together and share all kinds of art and make friends doing it.
“We look forward to running another challenge,” she said.
They are already talking about running the challenge again next year. Anyone looking for more information can contact them at artdogscreativitychallenge@gmail.com Art Dogs is available online, at www.facebook.com/artdogsmagazine.