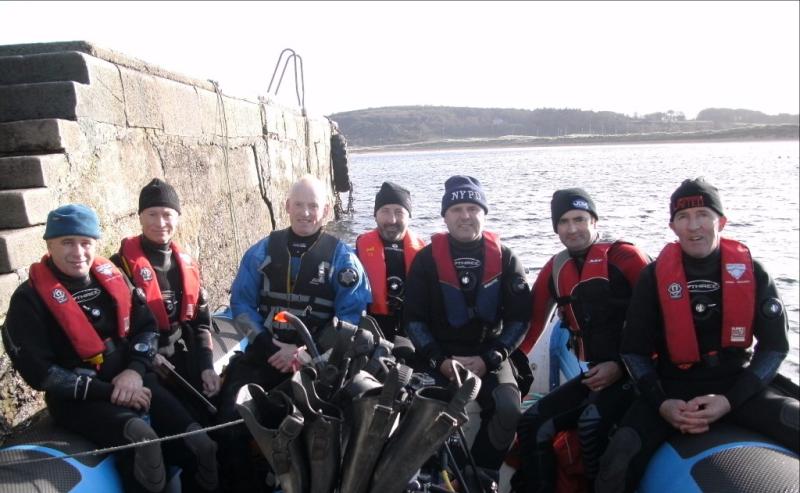 With the arrival of autumn the colours in the countryside are now coming into full effect and the overnight air temperatures are falling to single figures, while around our shores marine life has started to quieten down a bit.
Large fish life is less apparent but the lobsters and conger eels remain in their lairs on dive sites like Dunloan Rock in Mulroy Bay.
So on Saturday morning the Kevin Boylan-led dive party conducted a two-stick dive at Dunloan rock in good in-water visibility of over 10 metres to a depth of nearly 25 metres, where water temperature is still comfortable at 12 degrees Celsius.
The first stick dived in the still strongly running incoming tide, which left them little room for error as they clung close to the rock during their descent in order to prevent being swept away by the tidal current.
The second stick dived nearly 50 minutes later and the current had settled considerably, allowing the divers to stop and look at the resident conger eels, lobsters and shrimps that effectively all live together at the deepest part of the dive site.
Other marine life that dominates this site includes, hydroids, hornwrack, various sponges and in the upper sections of the water column a range of seaweeds including podweed and kelps.
Once the divers left the shelter of the rock they felt the full effect of the flooding tide and enjoyed the drift dive that makes this site renown.
After all divers had been safely recovered they returned to Mevagh slipway, finishing of a perfect dive on a sunny October morning.
Sadly Sheephaven SAC has received the news that former club member Donal McEleney passed away on the 22nd September 2016.
Donal died after a long and characteristically brave battle with cancer, in the comfort of his family and close friends who were beside him in his final days in the care of the Donegal Hospice.
Donal had a distinguished career with Sheephaven SAC, joining in February 2000 and subsequently reaching the grade of instructor M2.
During his association with Sheephaven SAC, Donal held office on club committees, as well as being an integral part in the building of the clubhouse.
While acknowledging the sadness of the family and friends of Donal’s passing Sheephaven SAC have posted on their Facebook page a collection of photographs from the latter years of his diving career, in the hope that they will remind everyone of happier days in his company.
Although Donal was a father, husband and brother to his family he was dive buddy to his friends in Sheephaven SAC. Ar dheis Dé go raibh a anam.