A busy week for Sheephaven SAC 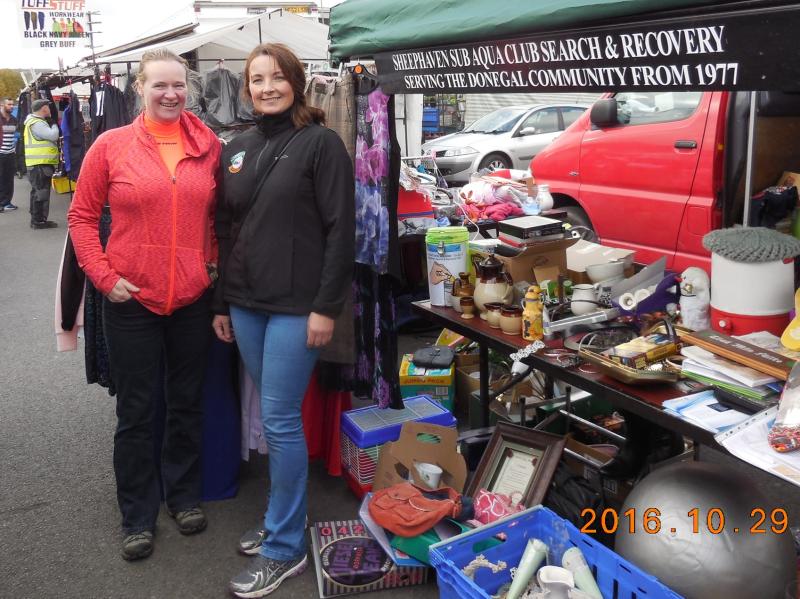 At the Letterkenny boot sale for the Sheephaven Search & Recovery Unit.

Sheephaven SAC conducted a variety of dives last week, starting with a wreck dive on Wednesday, followed by boat dives on Saturday and Sunday mornings.
The Wednesday morning wreck dive was carried out as a shore dive from Cranford pier, where the divers first went out from the pier to boats sunk in close proximity to each other in 10 metres of water, about 150 metres out from the shore. On the return, the divers got on to the single trawler wreck closer to the shore.
All three wrecks are extensively covered in marine growth and a fine covering of sediment, which will plume up around the divers if they are not careful with their buoyancy. Nonetheless this was a great dive, carried out in good in-water conditions of greater than 10 metres horizontal visibility and just less than 12 degrees Celsius.
Saturday morning’s Sheephaven SAC dive included divers from Leitrim Sub Aqua Club and involved a boat trip up Mulroy Bay to Pan Rock, led by Kevin Boylan.
The two boat, two-stick dive was conducted to maximum depth of 30 metres, with a surface to surface time of over 30 minutes.
Marine life on site included abundant numbers of anemones, sea squirts and some sponges, with fish species including gobies, blennies and the occasional wrasse, while the site has various shellfish species such as tower shells, crabs and scallops.
As good as diving is at Pan Rock is, the visitors were more than impressed with the tranquility of Mulroy Bay in its autumn colours on a beautiful October morning.
The Sunday morning Sheephaven dive was conducted at Duncap Head, once again with divers from Leitrim SAC coming along for the ride.
For the first time in some weeks conditions had settled out to sea, with the easterly breeze abating sufficiently to allow the Atlantic swell to ease back at last.
Kieran Doherty led the two-boat dive party out from Downings on an overcast morning with no wind and a long swell rolling from the northeast.
On site the divers were able to get to a maximum depth of over 20 metres where they observed a sea bed of broken rock giving way to sand, around which there were magnificent examples of large ballan wrasse, pollock and ling on show.
In-water visibility was good at nearly 10 metres horizontally and with temperatures of around 12 degrees Celsius the divers were able to conduct a 30-minute dive in some comfort.
Finally, Sheephaven SAC wishes to express its sincere appreciation to Caroline McGee, Bernie Gallagher, Brendan Proctor and Willie Sheridan, who represented the club at the Letterkenny car boot sale on Saturday morning.
Caroline and Willie started some time ago gathering together donated items from club members and on Saturday morning were at the sale long before dawn to set up their stall, which was dedicated to the Sheephaven Search and Recovery Unit.
For the second year in a row their hard work has provided much-needed funds to the Sheephaven S&R Unit, which will be used to assist in keeping the unit financially viable in the future. Once again the club wishes to say thank you for all that this involved.