Campaigners brought submissions to council offices in Dungloe on Wednesday 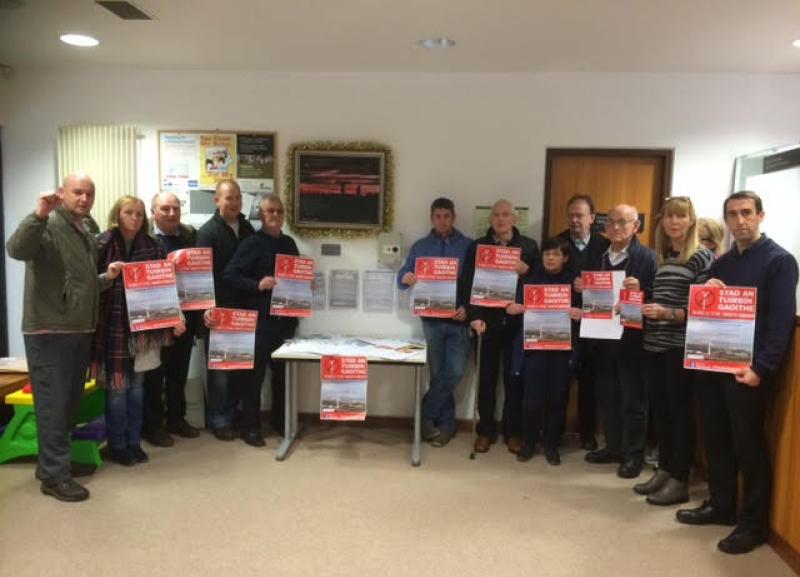 Local people opposed to plans for a wind turbine on the Gaoth Dobhair Business Park turned in more than 120 objections to the project to Donegal County Council offices in Dungloe on Wednesday.
Objections were brought to council offices by members of the local working group, Stad an Tuirbín Gaoithe, and other members of the public.
Lir Energy Ltd, a company based in Letterfrack, Co. Galway, have applied to Donegal County Council to erect a single, 123.5-metre-high wind turbine at the Údarás na Gaeltachta-owned site in Gaoth Dobhair.
Local people said they oppose the proposed wind turbine on the basis of its scale and size, among other issues. They said they did not oppose wind energy projects, but opposed the location of this proposed turbine.
There have been public meetings held locally since the application was submitted, and last Friday up to 70 people protested against the proposed turbine at the Derrybeg offices of Údaras.
“I was amazed at the amount of people who turned up and who put [the objections] in,” Gearóid Ó Maonaigh, chairperson of Stad an Tuirbín Gaoithe, said. He said each submission had a €20 note attached, the cost of a submission.
"When you go up this close to Christmas and people are willing to put something like that out, it’s a great commitment from them all together,” Gearóid said.
Independent Cllr. Micheal Cholm Mac Giolla Easbuig, who also handed in his objection to the proposal at council offices on Wednesday, said he believed it was clear that the vast majority of the community are against the location proposed for the turbine.
"Again I call on Údarás na Gaeltachta to withdraw from the project, and also call on Lir Energy to do the same, in the interest of our community,” Cllr. Mac Giolla Easbuig said, adding, “Well done to the committee on the hard work in raising awareness and bringing the community together on this.”
Cllr. Mac Giolla Easbuig, Sinn Féin Cllr. John Sheamais Ó Fearraigh and Thomas Pringle, independent TD, stood with members of the community at last week’s protest at Údarás offices in Derrybeg.
In a lengthy statement issued last week that detailed Údarás’ exploration of renewable energy options for the business park, a Údarás spokesperson said, “Although Údarás consented to giving Lir Energy permission to apply for planning permission for a renewable energy project on the organisation’s property, it can be confirmed that there is no contractual agreement between Údarás and Lir Energy in regards to this project.”
Following the Údarás board meeting in Galway last Friday, the board issued a further statement that expressed concern at the process regarding construction of the turbine and said they were not happy to stand by any decision that would have a negative impact on the community standard of living.