Letterkenny under-18 footballers win the Conor Briody Cup in America 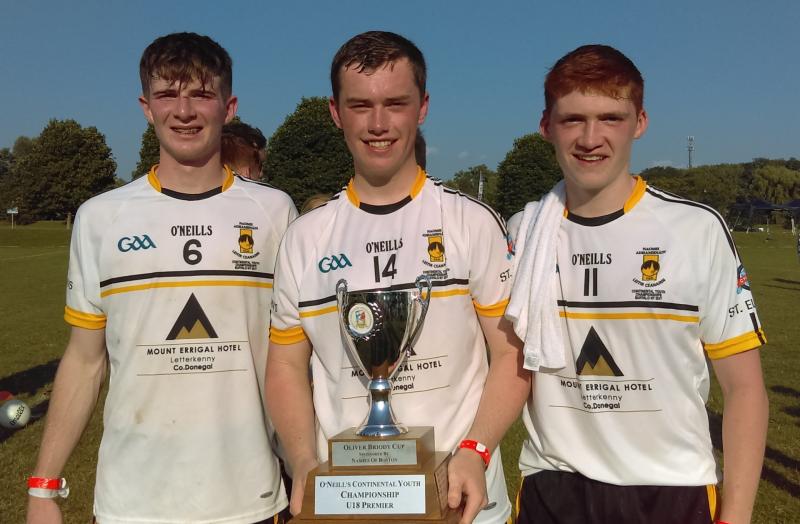 The minor footballers and hurlers from St. Eunan’s GAA Club made history over the last week as they travelled to Buffalo, New York and returned with the Oliver Briody Cup after taking victory in the annual CYC event for North American clubs.

The Letterkenny lads became the first ever Irish team to compete at the “CYC’s”. St. Eunan’s received their initial invite through the founder of Glenside Gaelic Club in Philadelphia, Brendan Gallagher. Gallagher is no stranger to Donegal with both of his parents being born here – his father Paddy “Darby” is from Dunlewey and his mother Noreen hails from Cabra just outside Churchill. Brendan lived and worked in Letterkenny for 15 months back in 2002/03 for HMG Architects.

“We had discussed the idea of bringing an Irish team over for the CYC’s and a team from up North were all set to come but pulled out during GAA Congress. Paul McGovern is married to my cousin Elaine and I knew he was managing the St. Eunan’s Minors with Brian McGeehin so I made contact to see if St. Eunan’s were interested in coming out” said Brendan. “They pulled it out in a short space of time so fair dues to them for that”, he continued “St. Eunan’s were a great asset to this year’s tournament in both football and hurling. They gave great displays of skill and tenacity and showed our home-grown players a few things they hadn’t seen before and that they don’t get to come up against on a regular basis so it was a good learning experience for our guys as much as it was the trip of a lifetime for the St. Eunan’s players.”

Over the four days of the tournament St. Eunan’s played three games of hurling and three games of football – all against the New York and North American All-Star teams. They began on the Thursday morning at 9am with a hurling game against the North American team and played out an entertaining draw – 1-09 to 3-03 - with Darragh Morrison getting the St. Eunan’s goal and Ryan Hilferty, Cormac Finn and Shane Maguire scoring some excellent points. Then at 6pm that evening the footballers took on New York in the last game of the day. St. Eunan’s turned in a great performance hitting 9-08 to New York’s 1-05. Eunan’s had 8 different goal scorers on the night with Oisin Purdy (2), Matthew McGovern, Conor O’Donnell, Eoin McGeehin, Peter McEniff, Patrick McColgan, Sean Ryan and Aaron Deeney all raising the green flag.

On the Friday evening, they played New York in hurling and once again ran up a big score – 7-13 to New York’s 3-04. This was a great team display with Ryan Hilferty and Cormac Finn once again leading the way on the scoring front. Finn scored 3 of the goals with Hilferty, Oisín Purdy, Ciaran Daffan and Darragh Morrison grabbing the others. They also had good displays from John O’Donnell, Seán Ryan, James Kelly, Cormac O’Kane, Paddy Tobin and James Tourish.

On Saturday morning at 9am the footballers were back in action against North America and won a close contest on a score of 2-13 to 3-07 with Louis Hasson and Matthew McGovern getting the goals.

That left the teams facing two finals on Sunday against North America after the USGAA All-Stars defeated New York in both hurling and football. First up was the Hurling Final at 9am. This game went down to the wire with a last-minute penalty for the USGAA team proving decisive despite a fine save from the initial penalty by Ryan Hilferty, the rebound was driven home to secure a 1-point win for the All-Star team, Oisín Purdy had scored what looked to be a winning goal just minutes earlier.

The football final threw-in at 5:15pm on Sunday immediately after the Girls U18 Club Final between San Francisco and winners Rockland (NY) and St. Eunan’s would face a confident USGAA All-Star team once again to decide the winner of the Premier competition.

St. Eunan’s started the game brightly, scoring 2-01 in the opening 4 minutes through goals from Conor O’Donnell and Eoin McGeehin. The USGAA team replied with 2 points from the boot of Ronan Higgins before points from Conor O’Donnell, Niall Hannigan, Eoin McGeehin and Peter McEniff stretched out the lead once more and on the stroke of half-time the impressive Éoin McGeehin bagged his second goal of the game to effectively seal the title. Further goals came in the second half courtesy of Louis Hasson and Cormac Finn while Eoin O’Boyle managed to save a late penalty to keep the clean-sheet intact and the visitors from Letterkenny took home the Oliver Briody Cup on a final score of 5-12 to 0-05.

There were great scenes after the final whistle as teams and families mixed to share stories and swap jerseys with any St. Eunan’s or Donegal jerseys proving a big hit with the US players. Included in the USGAA team was Stephen Bradley, son of Ben Bradley (Mountain Top), Patrick McCarry who is related to the Carr family Hawthorn Heights & Fanad and Cormac Slattery whose father Michael went to school in Galway with Maurice McWalters, father of St. Eunan’s defender Conor McWalters. Great friendships were made and many of the players have already connected via various social media platforms.

St. Eunan’s have extended an invite to any North American clubs that may wish to bring teams to Ireland for games and are hopeful that a few teams will take them up on their offer beginning in 2018 with all age groups and codes catered for and St. Eunan’s hope to include other local clubs interested in getting involved.

“It was the trip of a lifetime for the boys” said joint manager Paul McGovern, “They went to Niagara Falls, took in a Minor League Baseball game and enjoyed the hotel swimming pool while away. Everything about the trip was first class and we’d like to thank the County Senior and Minor committee’s for giving us permission to travel to the CYC’s. We’d also like to thank Malin and Four Masters for agreeing to reschedule our championship matches to make it possible for us to travel and of course the organising committee of the Continental Youth Championships for bestowing on St. Eunan’s the honour of being the first ever team from Ireland to participate in the tournament. We’re also grateful for the support of our own Senior and Minor Boards at St. Eunan’s for their support of the trip and to Charlie McAteer, Jonny Hilferty, Garrett McDaid, Mickey Mulhern and Paul Hannigan and not forgetting the “3 Mums”, Elaine, Emer and Anne Marie for all their help” Co-Manager Brian McGeehin added “It’s a trip we hope they never forget – even long after their playing days are done – they made great friends while in Buffalo and again hopefully those will also endure. Myself and Paul are immensely proud of how they conducted themselves in the USA, they are a great group of players. The scenes after the final will whistle will live long in the memory as players swapped tops and stories and we got to see so many old friends now residing Stateside such as Ben and Louis Bradley, John and Paul McDaid and Sean Melly all from Letterkenny with many more from Donegal also there for the weekend. It was pleasing that the lads gave a good account of themselves in both the football and hurling and it was nice to take the cup home to Ireland for the first ever time,” he concluded.