Doherty and MacLochlainn both contested their first general election in 2002 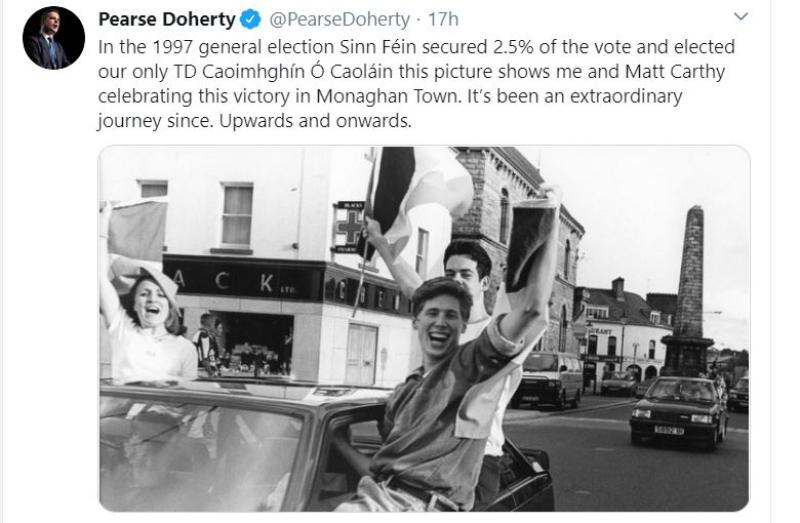 Flashback to 1997...Pearse Doherty and Matt Carthy celebrate after Caoimhghín Ó Caoláin was the only Sinn Féin TD elected

Sinn Féin’s two Donegal TDs, Pearse Doherty and Padraig MacLochlainn, both contested their first general election back in 2002 without success, but since then the party has seen a gradual and, more recently, spectacular rise in its share of the vote in the county.

Pearse Doherty got 7.57% of the vote in his first outing in the old three-seat Donegal South-West constituency, with a first count total of 2,696.

In 2004 he ran in the European elections, getting a 15.5% share of the vote, and also in the local elections where he was elected in the Glenties Electoral Area.

In common with MacLochlainn, he just missed out on a seat in the 2007 general election.

His share of the vote climbed to 21.23% but in the three-seater his first preference total of 8,462 wasn’t quite enough as he was unable to dislodge the three out-going TDs, Mary Coughlan (FF), Pat ‘the Cope’ Gallagher (FF) and Dinny McGinley (FG) - but he was certainly knocking on the door.

Indeed, in 2011, he swept to victory as he actually got 32.97% of the vote (an even higher percentage share than this time around) and his 14,262 first preference votes saw him being elected on the first count, with the quota being 10,816.

In 2016, he got 10,300 votes in the new five seat Donegal constituency - but the decline was due to the running of three Sinn Féin candidates.

Back in 2002, MacLochlainn contested his first Dáil election, and polled 3,611 first preference votes, which was a 9.93% share of the vote. That left him sixth at the end of a first count in the old three-seat Donegal North-East constituency.

MacLochlainn then topped the poll in Donegal North-East in 2011, getting 9,278 votes which represented a 24.47% share. Joe McHugh (FG) and Charlie McConalogue were the other two TDS returned that year.

In the 2016 general election, Sinn Féin made the decision to run three candidates in the new five seat Donegal constituency. It proved to be a mistake. While Pearse Doherty got 14.05% of the first preference vote (10,300) and was duly elected, MacLochlainn lost his seat.

He polled 5,742 votes in the first count and was always chasing. Party colleague Gary Doherty had a fine first showing and got 4,136 votes but poor vote management meant the party lost a seat. Had they run just the two candidates, MacLochlainn would have been elected.

Ironically, given the Sinn Féin surge this time around, had they run a third candidate they would have been very much in the hunt for three out of five.

The photo shown at the top of this story relates back to 1997 and was posted by Pearse Doherty on his twitter account over the weekend. In that year, Sinn Féin got 2.5% of the vote.  The photo shows Doherty and Matt Carthy, now elected as a TD in Monaghan, celebrating as they made their way through Monaghan Town after Caoimhghín Ó Caoláin was elected in Monaghan and was the party's only TD in the Dáil.