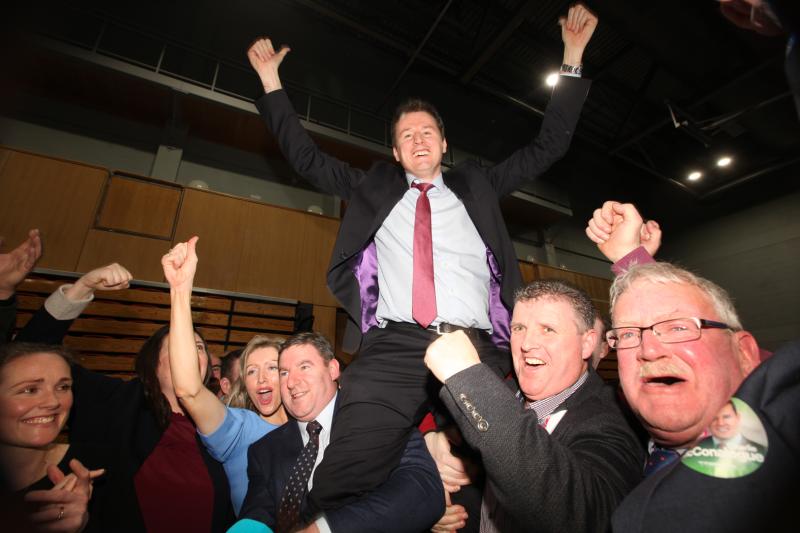 Longstanding Fianna Fáil TD Pat The Cope Gallagher was just pipped at the post by his Inishowen running mate.

Speaking to Donegal Live immediately after his re-election, a reflective Charlie McConalogue TD thanked everyone of the 10,270 people who voted for him and his election team.

Mr McConalogue added: “We were very close to winning two seats, holding our two seats. There was just a very small margin, which was very disappointing that we didn't manage to do that. We need to reflect and build.

“There is no doubt that over the course of the election campaign, Sinn Féin got the floating vote. They had a surge and that is certainly ate into our vote here in the county. That happened shortly before the campaign and over the course of the campaign. As a party, we have to re-build. As a party, we don't want to be in a situation where we have only one seat in the county. We want to get back to two.

“It is very disappointing. We just very narrowly missed out on that and into the future we will be looking to get back to stage. It was a difficult day for the party,” said Mr Mc Conalogue.

On the question of a post-election Fianna Fáil / Sinn Féin coalition government, Mr McConalogue said “We will have to see over the next few days in relation to the ultimate number of seats.”

He added: “As a party, Fianna Fáil will be looking to discuss with other parties as we get as we indicated before the election campaign, and reflecting on the result, taking on board the result. Coalition is a matter for the next number of days and the next number of weeks as well.

“Today, tomorrow and the next day, no doubt there will still be counts which are being finalised and we will have to wait and see what the final seat tallies are.

“The message of the election campaign is in relation to the failure of the outgoing government to address housing and to address health. We see that in our own county, as well as across the country. That was our party's focus very much in the campaign. Unfortunately we did not get the votes that we were seeking and we didn't get the number of seats that we had hoped to get. But, in terms of the next days and weeks, it is going to be about how Fianna Fáil can actually go forward in terms of addressing those issues and that will be our focus,” said Charlie McConalogue.

Asked about a possible Fianna Fáil / Fine Gael coalition government, Mr McConalogue said the party's objective had been to bring forward a “change of government.”

He elaborated: “We wanted to bring about a government which Fianna Fáil would lead. We will have to see now where the seats lie over the next period of time. But certainly there has to be a following through on that and trying to ensure the party is in the position to deliver and address those issues.

“Míceál Martin has done a tremendous job for the party since 2011. We were in a reasonable position going into the election. Unfortunately, the election campaign and the surge in terms of the way the voters went during that didn't deliver us the seat return we wanted.

“I would still be very hopeful we would be the largest party across the country and hopefully if we are in that position, we can work to ensure Fianna Fáil can lead a government and ensure that issues which have the government has failed on, such health, such as housing can be addressed.

“Sinn Féin had a massive vote and had a very strong camapign. [In terms of Mary Lou McDonald becoming Taoiseach] we will have to see where the seat tallie fall. We will have to see what the final result is. Some places are still counting and I have just been elected, so let's see what the seat tallies are. From a Fianna Fáil point of view before the election, the mandate we were seeking was to bring about a change of government and for Fianna Fáil to lead that government, that was our objective,” said Charlie McConalogue.

Charlie McConalogue described the loss of Pat The Cope Gallagher from the Dáil as a “massive disappointment.”

He added: Pat has been a tremendous servant to the County Donegal for almost 40 years now and came so, so close to returning our two seats. It is really disappointing for us that we have just fallen short of that.

“While I am glad to be re-elected myself, I am very disappointed that Pat is not alongside me, delivering the two and holding the two seats. We lost by a very small margin.

“Pat has been a very good servant and the party and I would like to acknowledge him,” said Charlie McConalogue.