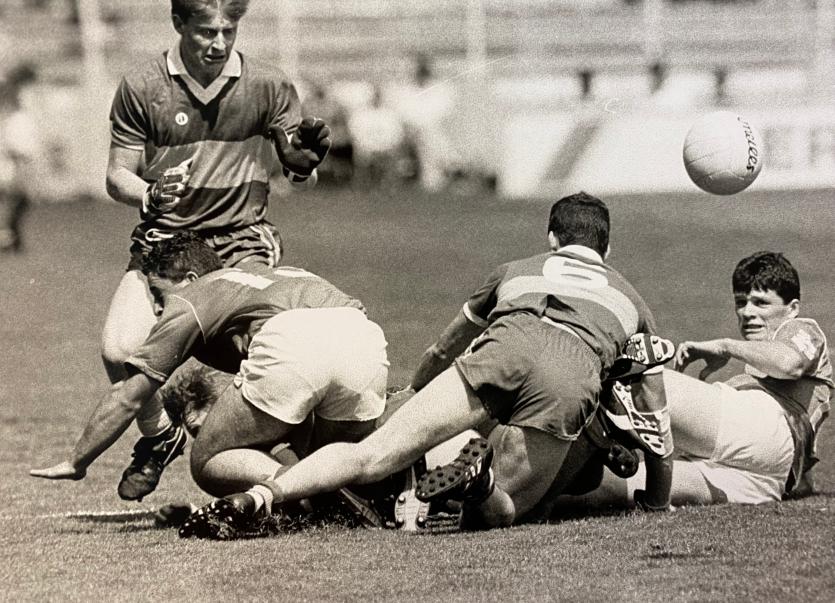 Kevin ‘Cookie’ Gallagher will take charge of St Michael's for the first time this coming Sunday when Cloughaneely come to the Bridge, having taken over from Tyrone native Gary O'Neill.

From neighbouring club Downings, Gallagher, an Ulster minor winner with Donegal in 1991, was only appointed at the beginning of last month.

He took up the position in Dunfanaghy just a week before the Covid-19 lockdown was lifted. There was none of online Zoom team gatherings and training sessions for the new St Michael’s boss. His previous management experience is part of a back to back Downings’ All-Ireland junior championship management and before that a two-year stint with Four Masters.

“It was a late appointment which was good in the sense I could get down to business right away,” Gallagher told the Democrat. “I know from my work. I travel around the county, Sligo and Leitrim and speaking to other managers and club officials adhering to the restrictions and organising online training was a real headache. I had none of that.

“The lads were all training on their own and had been working away under the supervision of Keane Ryan. Keane has been working with them on strength and conditioning for the last few years.

“They have all comeback in good enough shape and we have been training three times a week - Tuesday and Thursday and Saturday mornings.

“The players have also been doing a couple of sessions on their own too. We’ve had between 30 and 35 five at the sessions and due to Covid regulations we work in pods of 15 or so players. It is all conditioned seven-a-side games, mostly.”

By and large, the new man is working with last year’s squad with a few additions coming up from underage. And Oisin Langan has returned to training after a year out with a knee injury.

“Oisin missed all of last season so it is good to have him back and it is a matter now giving him time to work his way back into the team," Gallagher continued. “We also have a number of young lads making the step up from minor and U-20 so will be a case of working them into the team and giving them game time to make the transition. It really is last seasons squad along with the few young lads been added to the squad.”

When asked about if Colm McFadden and Christy Toye were back on board, Gallagher said he hoped to have them back in the next few weeks.

County commitments means Michael Langan won’t be available until Donegal complete their championship campaign whatever stage that may be. Oisin Cannon and Carlos O’Reilly are members of the Donegal U-20 squad and won’t be available for a number of weeks, after this weekend.

“They are all mad keen to get back playing. They were telling me last week that most them haven’t played a game in nine months," Gallagher added.

“They have a great hunger and I have a great hunger too after taking a year out last season.
“I took a last year off after two years as part of the management team with Downings to get married. But the lockdown meant the wedding had to be postponed. I also realise I’m creeping up in the years too so I’m anxious to get back into management again before it is too late.”

Former star forward Brian McLaughlin and his brother Raymond, along Manus Friel, Cathal Sweeney, Cathal McConnell (stats), Keane Ryan (S&R) and Tommy McGinley (kitman) make up a strong backroom the new man has put together. Danny Ferry is the reserve manager and the two teams are going to work closely.

St Michael’s finished up mid-table in the All-County- League 2019 - the last season the All-County- League was played. Due to the pandemic the leagues were run on a regional basis last year. The men from the Bridge won their three groups games -over Glenswilly, Milford and Ardara - in last season’s SFC before bowing out to Kilcar in the quarter-final, putting up a great fight coming back from 12 down to two, before losing out 3-14 to 3-12.

“Realistically we are probably starting off a mid-table team and just outside the top four or five. The target is get back to the top of table and the number one spot."

St Michael's were due to get the new season up and running last Sunday. They were down to play Bundoran away. But the game was called off on Saturday night due to the death of club president Brian McGinley.
So they get the new season underway this Sunday with a mouthwatering local derby clash with next door neighbours Cloughaneely.

Gallagher concludes: “It is a local derby all the players know each other well. Cloughaneely drew at home with Ardara last weekend. Hopefully we will begin with a win.”