'The process is broken' - Donegal GAA will be supporting rule review

Donegal GAA County Board chairman Mick McGrath, while having no issue with the Armagh appeals, believes the system must be looked at 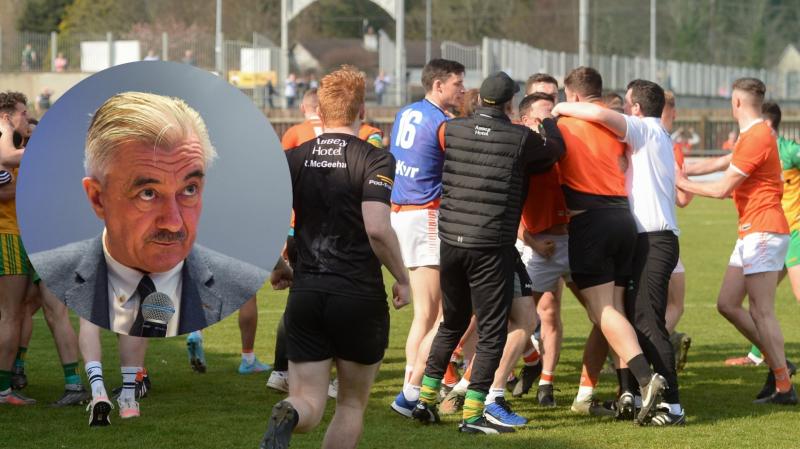 The suspensions and appeals come from the meeting of Donegal and Armagh in Letterkenny and, inset, Mick McGrath

After the controversy of suspensions being overturned in the lead-up to Sunday's Donegal v Armagh Ulster championship quarter-final, there has been a widespread call for a review of the GAA rules and their disciplinary system.

Proposed suspensions which arose from a melee at the end of the league encounter between the teams in O'Donnell Park, Letterkenny, at the end of March, were appealed by Armagh players while Donegal players accepted their punishment.

As it turned out, it didn't affect Donegal as they proved too strong for the Armagh challenge by 1-16 to 0-12 with three of the four Armagh players involved playing a part in the game.


Speaking this week, Donegal chairman, Mick McGrath, said while he had no issue with the Armagh appeals, he felt that it was the opinion of GAA people in every county in Ireland that the system was broken and in need of a review. He also feels, as do most people, that there are too many avenues of appeal at present.

"We would be supporting that review as we need a clear and transparent understanding of the rules for everybody and not just for professional and legalised people."

It is widely known that the Armagh appeals were successful because they brought solicitors and a barrister with them to their appeal in Croke Park.

In relation to the disciplinary process after the Donegal-Armagh game in Letterkenny, McGrath said that Donegal took a certain stance. "We made a decision that we weren't going to appeal and we didn't comment. It was Armagh who were appealing so it wasn't a Donegal issue.

"We concentrated solely on our panel. The team manager, the players and myself spoke about it and we had no difficulty with what was in the referee's report. We thought the referee had a good enough game.

"I think looking at it now, it was the right decision. What other people did was entirely up to them," said McGrath, who felt the Donegal focus worked as they knew a week in advance what team they were fielding for the game.


The Donegal GAA chairman, however, feels that the disciplinary system does need looking at and that there are too many layers to appeal.

"Our Central Council delegate will be asking at the next Central Council meeting how such a shambles occurred. We accept that everybody has the right to appeal. There are too many layers of appeal in my opinion," said McGrath pointing out that you can go to the CCC, Hearings' committee, Central Appeals Committee (CAC) and then the Disputes Resolution Authority (DRA).

"That we have generated a rule book that can be continually challenged by legally professional people in an amateur organisation is wrong," said McGrath, who feels the rules should be clear and non-debatable.
ADVERTISEMENT - CONTINUE READING BELOW