Manus: Good luck Rory and thanks for all 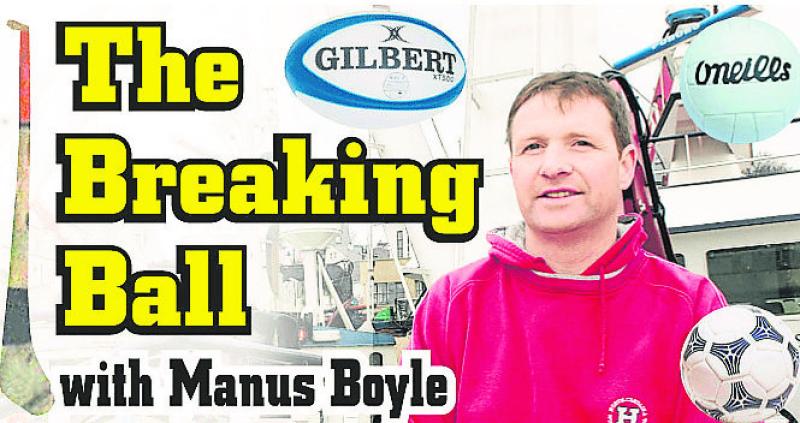 When Rory Gallagher decided to take the role of Donegal senior manager, he was always going to be judged against the success of Jim McGuinness.
Rory had spent a few of those years with Jim and had a great insight into what made it all work, so the perception might have been that you just replicate that, and that the formula must work.
To be fair, Rory tried it his way. He had his own ideas on how the game should be played and for the first couple of years, with many of the group that were involved in 2012, it looked like the success would continue.
However, the years of continuous training and commitment by many of the players caught up with them and that extra spring or moment of magic was harder to find. Rory and his management team decided that he had to introduce the younger lads into the team during this year’s national league. To be fair, all those introduced were flying during many of the league games. Holding on to Division One status while blending eight or nine new players into the side was for the best part, a great success and one that should not be overlooked.
But Gaelic football has always been about championship, whether it’s club or county. That is what you are judged on.
In 2015 and 2016 we reached Ulster finals only to be narrowly beaten by Monaghan and Tyrone. There was no great shame in that but because we had won a few titles before that, our expectations had grown to a level where not having a bit of silverware at the end of the year was looked upon as a disaster.
Many people have poor memories. Yes there were moments during both games that you could have said ‘if we done this or that we could have won the game’. But hindsight is not something you can call upon in the middle of a game.
You also have to accept that the success or failure of any manager is in the hands of the players. If they have a bad day, the cynics will suggest that the manager hasn’t got what it takes. If the same players have a good day, suddenly the manager is a genius. Fine lines.
My only criticism of the way Donegal played under Rory and his management team was that we carried the ball too much. We rarely kicked the ball. The fact that we had probably one of the best full forwards in the country yet he spent most of his time defending on the half-way line did not make sense to me or indeed many others who follow the game.
Under Jim, Michael Murphy was used primarily as the main target man along with Colm McFadden. Under Rory, Michael was used mostly around the middle of the field.
Whether or not the player wanted to play there, or Rory felt that he needed Michael holding the middle, I’m not sure. But for me, when we needed to break down teams, Murphy was wasted in the middle of the field, doing the work the other players could have easily done.
In defence of the current management team, it has to be said that the loss of so many players in such a short space of time was a huge blow. Jim had taken every ounce out of the older lads so that when Rory got his hands on the reins, many of the lads were burned out.
No team can afford to lose eight, nine, ten players from a squad in a couple of years and still expect to compete at the top level.
After this year’s poor showing against Tyrone you could sense the writing was on the wall. Longford was one of those games you were expected to win but you knew well it was never going to be easy. We struggled but came through.
Away to Meath was a different challenge and the Donegal lads dug deep and pulled off a great win. Many would not realise going into Navan and coming out with a victory was never going to be easy.
After that the expectations of many grew again. I’m not so sure where this sudden optimism came from, but I heard many knowledgeable football people saying if we got Roscommon in the quarter final we had a chance.
It seemed that the form shown by the team in the early rounds had been forgotten, Galway sliced through us. We looked tired and lacked the fight and know-how to counteract the situation when we went behind.
When you are a counter-attacking team you have to get your nose in front to make it work. Do you put that performance down to the manager and his management team? Yes, they take a share of the blame, but once the players cross the white line they must accept their share as well, that’s the way it works.
If Rory had walked away because of the abuse on social media, I wouldn’t blame him one bit. These cowardly, so-called supporters hide behind anonymity yet get the opportunity to tear someone’s personal and professional life apart. In their comments they just didn’t go after Rory, they insulted his family, his friends, the players, all of those who support Donegal with their vile remarks.
Good luck and thanks to Rory and the rest of the management team who have put their lives on hold for the sake of Donegal football in the last number of years.
Many don’t know the commitment required. There are those who do and appreciate the effort and endeavour required to take on such a role.
The next task for the county board will be to get a new person in the job as soon as possible. After the last week of social media and personal attacks, it might not be as easy as people think.