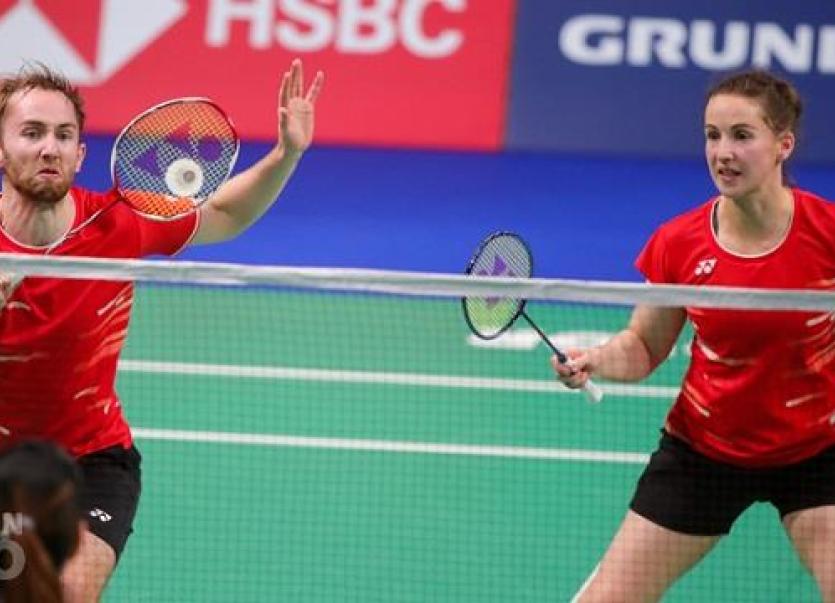 Donegal’s Sam and Chloe Magee have been back in action at the 2021 Swiss open Bwf Tour Super 300 and Olympic qualification event.

The Raphoe siblings made it into the last 16 after beating Callum Hemming and Victoria Williams of England 21-12 21-16, but ultimately were defeated by number 7 seeds Mark Lamsfuss and Isabel Hertrich from Germany (21-17, 21-8).

It was their first competition action since the Denmark Open in October.

Speaking to Badminton Europe, Chloe said: “We’ve been quite lucky as we have been able to train pretty much as normal. Other badminton activity in Ireland completely stopped and a lot of people are struggling with the long wait, so we are actually very blessed that we can continue.”

Talking about the length of time between the Denmark and Swiss Open, Sam describes how they felt coming into this week. “I think we needed to figure out if we can still do it. It has been a long time since we’ve played. This week I was quite anxious, not having that feeling, even just going to an airport and going for a match. So, it was nice to get on court and play. Once we got back in the old instincts kicked in thankfully,” he said.

To get to Switzerland was a major effort.

“The hardest part was actually just getting flights to come here,” Chloe explained. “We could not get a direct flight to Basel. It’s the things that you don’t think about because normally it’s so easy. It’s taken us a long time, a lot of paperwork and a lot of flights.”

Sam added: “You see a result on the computer, but you do not realise all the stuff that you actually have to do to even stand on court now.”

Ireland’s Nhat Nguyen also competed at the event and went out in the last 32 to World number 34 Khosit Phetpradab of Thailand.

Moya Ryan and Kate Frost and moved into the last 16 where they were defeated by World number 14 ranked pairing of Gabriela and Stefani Stoeva from Bulgaria.

Meanwhile, the Olympic qualification timeline for Badminton was revised. Originally the process finished in April; this has now been rescheduled to June 13. The final date of the reallocation of places will be July 5.