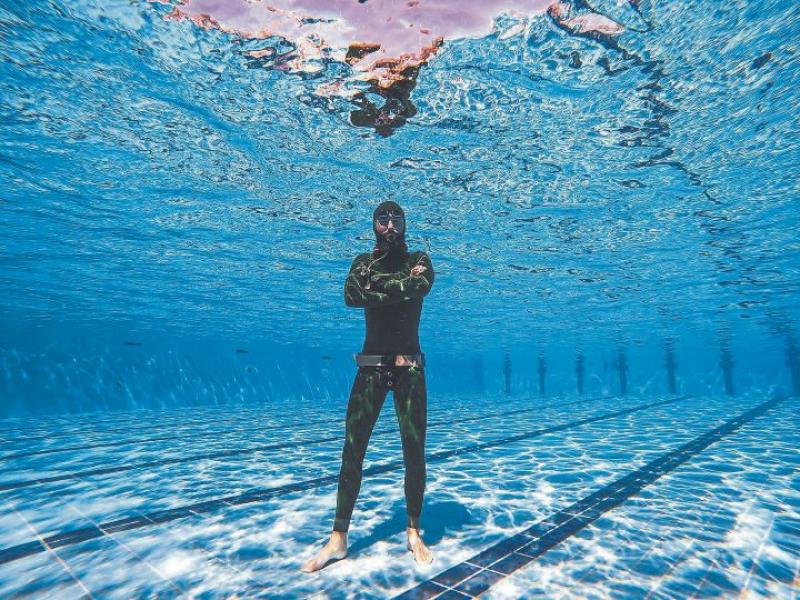 Dave McGowan is from Ballybofey

A Donegal native is on top of the world after taking the male honours in two disciplines and also the overall gold at the International Association for Development of Apnea IAIDA) International Blue Ocean Freedivers Pool Competition in Dahab, Egypt.

Freediving is a niche sport where participants hold their breath and swim down along a rope into the deep sea or perform multiple lengths of a swimming pool on one breath. There are currently eight different recognised competition disciplines where records can be set.

McGowan took up freediving as a means to train for his other passion of spearfishing in 2014. He began taking his training seriously in 2015 and in 2016 he broke the previous Irish static breath-hold record of five minutes and 35 seconds with a breath-hold of almost six minutes. Five years later, that 5:59 Irish record still stands.

Mullingar based McGowan, who is originally from Ballybofey and with a number of achievements already in the sport of freediving, was in Egypt recently for the International Blue Ocean Freedivers Pool competition.
Day one did not go to plan, with a malfunctioning dive computer contributing to McGowan overshooting his target, coming very close to losing consciousness on the surface and ultimately receiving a red card and disqualifying his dive of 162m, which took approximately two minutes and 45 seconds.

McGowan said: “This dive of 162m was huge for me, I had built up to a distance of 135m in training and was confident that I could do 10-15m more on the day of the competition but certainly not almost 30m extra. I had been relying on the computer to give me a good idea of when I could surface and when it didn’t work it had me questioning the distance that I had already covered. Trying to work this kind of thing out at the end of such a long swim on one breath is not an easy thing. The mind becomes foggy and basic tasks rely on an element of subconscious to get you through it.

“I essentially got it wrong and ended up swimming almost another complete length of the pool. I was surprised to be told that I had covered 160m+ when in my head I had barely made 135m.”
Unfortunately at the end of the dive, McGowan was not able to complete the ‘Surface Protocol’ which signals to the judges that he is ok and was subsequently shown a red card.

Day Two
McGowan returned on Day 2 determined to set the record straight.
He completed his dive of 150m (equivalent to six lengths of a standard 25m pool) in the DYNb discipline (distance swam in pool on one breath using freediving fins) in a time of two minutes and 35 seconds. This time he made a clean surface protocol, receiving a white card from the judges, legitimising his performance and confirming this dive as his fourth Irish National Record.

“I wasn’t really nervous leading into day one of this competition as I had approached my training in a conservative way and knew what I was capable of,” he recalled.

But after what had happened on the first day, he was feeling the nerves “creep into the pit of my stomach” on day two. 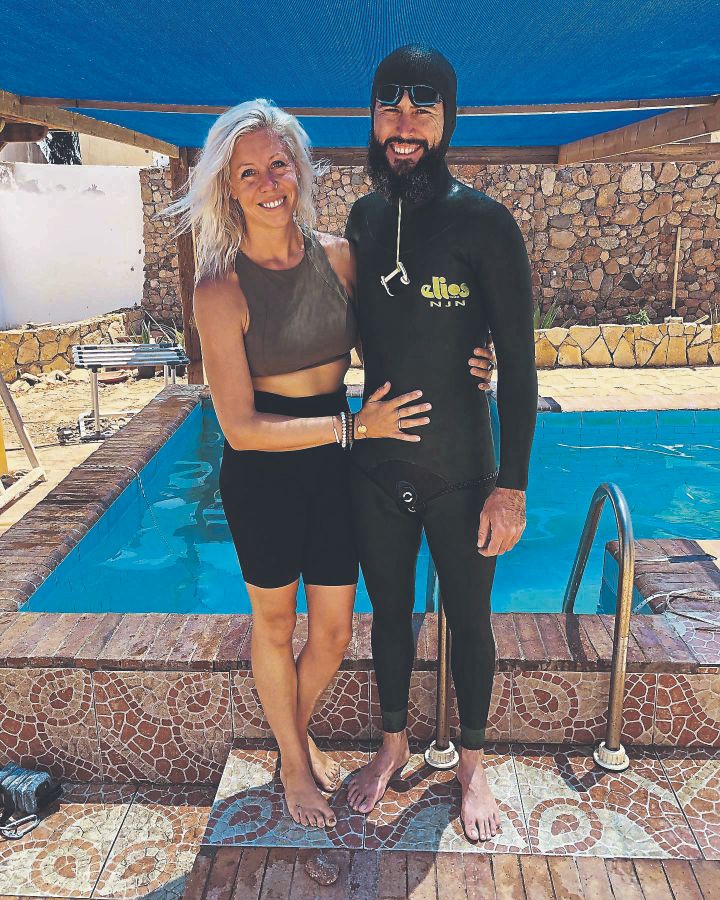 He explained: “This sport is so psychological, it takes such mental strength, you really need to be able to control your thoughts and feelings and at times like these, in the moments before a record dive you have to be able to focus and get rid of any thoughts of negativity or doubts in your abilities.
“I feel like I handled it quite well and managed to complete what I had set as an upper limit for myself. I would have walked away satisfied with my performance and also with the record in anything above 132m, so to have been able to do 150m I really am over the moon – it was a difficult dive for me and for sure it will be difficult for anyone to beat in the future.”

Day Three
Day 3 saw McGowan return to finish off the competition with a ‘fun’ dive in the DNF or ‘No-fins’ discipline, (distance swam underwater on one breath in a style similar to the breast-stroke). In both depth and pool, this discipline is usually considered the most pure, and most original of all of the freediving disciplines, it is graceful to watch and more-so with the right training and technique, enjoyable to compete in.

McGowan’s swim of 116m in two minutes 19 seconds places him third of all time in the Irish rankings for this discipline.

These latest performances from McGowan move him from fifth to first overall in the Freediving Pool-Discipline Irish Rankings.

Added to McGowan’s previous record dives, this completes his monopoly of pool and depth disciplines and confirms his position as the most successful Irish freediver of all time.

McGowan has been training for this pool competition while also sharing his knowledge and passion for freediving with others, sometimes spending in excess of six hours a day in the water.

“I have been trying something new with this idea of training while teaching to such a high workload. This time I have made it work and achieved what I set out to do but I would be lying if I said it wasn’t without its difficulties.

Teaching freediving is such a physical job and it really does take its toll on the body, and so trying to manage a training program as an athlete simultaneously is extremely draining.”

He expressed his thanks to all those who have supported him in any way,

In 2020 the Freediving Depth World Championships were cancelled due to the Covid crisis, and this year they are re-scheduled to take place in Cyprus in September. 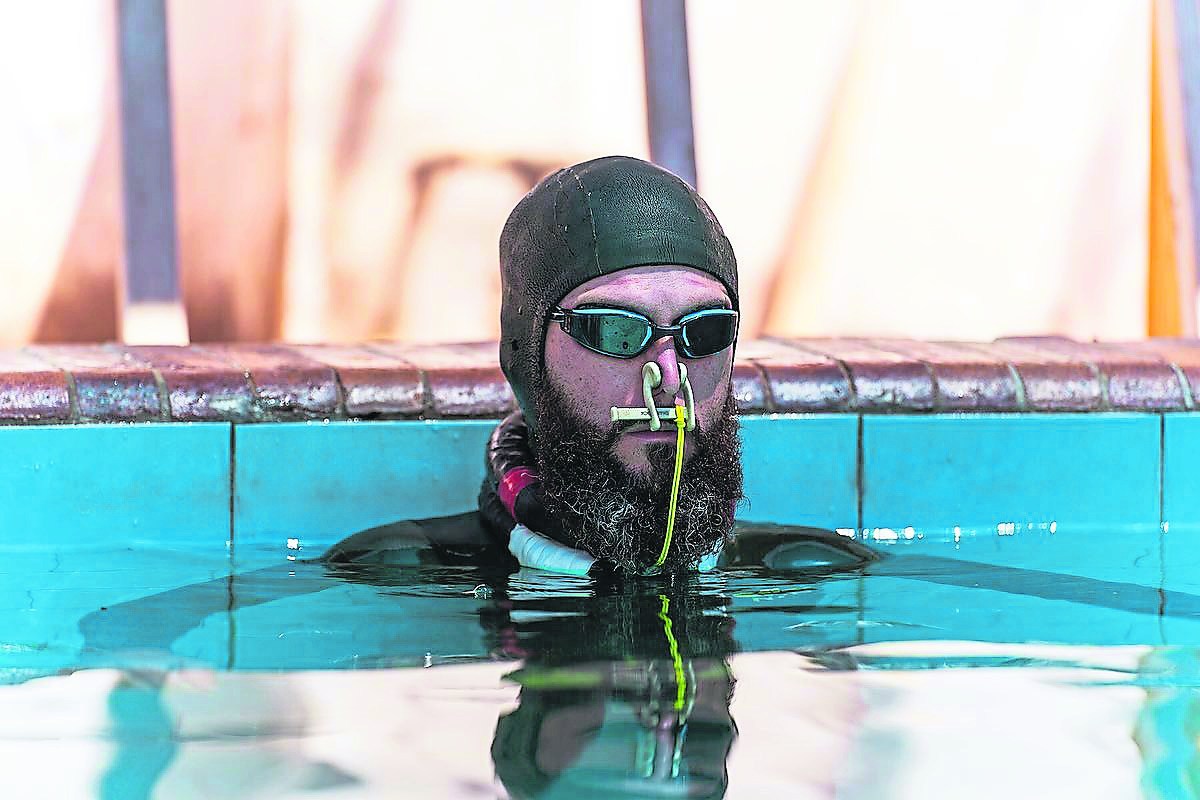 However, as with any events of this nature there is a lot of uncertainty around whether they will go ahead or not.

“I had hoped to represent Ireland at the World Championships in 2019, but due to the lack of Sports Funding I had to pull out of the entry list.

“Perhaps in the future, with the help of some Sports Funding or Irish Industry backing, I will be able to realise my dream of representing Ireland on the world stage, if not this September then perhaps at the next one,” he said.