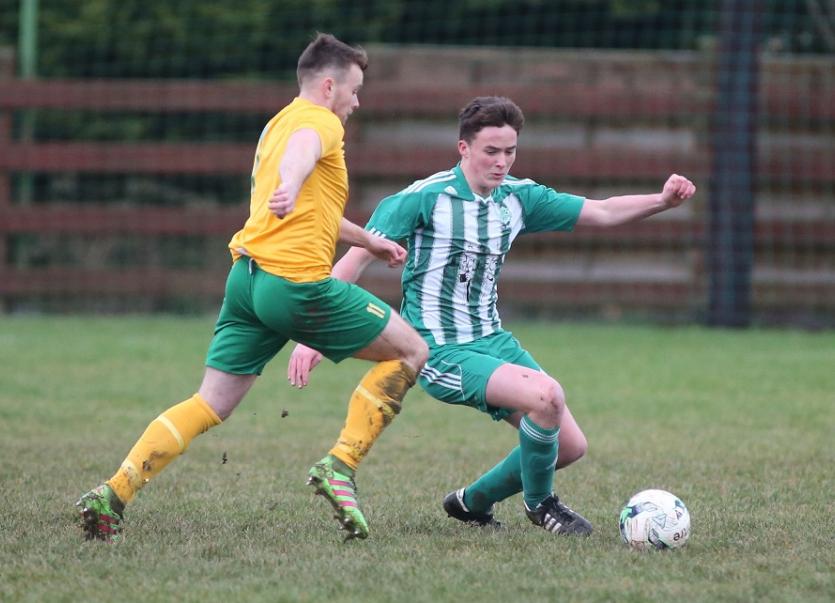 Millford's win over Rathmullan Celtic has opened up the Premier Division of the Donegal League with three teams now level at the top - Rathmullan, Glenea Utd and Kilmacrennan FC

REPORTS
Brian Mc Cormick Sports Premier Division
Milford United 3
Rathmullan Celtic 1
Milford battled back from the loss of an early goal to take the spoils in the Moss Road derby which was reversed to the Flagpole Field this afternoon. Eoin Sheridan put Rathmullan ahead early on but Milford were quickly back on terms through Kyle Black.
Cathal Mc Gettigan's header put Michael Deeney's team in front and another header from Johnny Logue early in the second half secured the win. The Hoops pushed mightily hard to find a way back but were denied by an excellent Caolan Mc Gettigan save the woodwork and some poor finishing by their standards. Three points and the derby-day bragging rights for Milford then after a well contested and sporting game.
Referee: Liam Mc Laughlin.

Lagan Harps 2
St. Catherine's 2
Lagan and St Catherine's shared the points in a close fought encounter in Orchard Park. Lagan went close on five minutes when Gavin Mc Glanaghey headed a Michael Doherty free just wide. Mc Glanaghey then went close again from a narrow angle.
St Catherine's took the lead on ten minutes when Ryan Cunningham seized on hesitancy in the Lagan defence to fire home. Lagan responded and when Chris Toner flicked a corner back, Mark Graham's shot was cleared off the line. Mark wasn't to be denied and got on the end of a flowing move with Michael Doherty and Kenny Doran involved, to equalise on forty minutes.
Michael Doherty struck the crossbar from a free right on halftime. Catherine's went close on fifty six minutes when Daniel Breslin spun sharply and struck the crossbar. Breslin was then denied by a good save from Damien Mc Fadden as Catherine's pressed again. Paul Mc Fadden restored Catherine's’ lead when he bundled home after Lagan failed to clear. Lagan equalised on eighty minutes. Michael Doherty had a great run and his cross was turned in by an unfortunate defender.
Lagan had a chance to win it in the final minutes when Frank Mc Brearty found Gavin Mc Glanaghey with a great pass. Unfortunately he scuffed his shot wide. All in all a draw was a fair result. For Lagan Barry O'Donnell, Ronan Gibson and Michael Doherty were best. For St Catherine's Ryan Cunningham, Oran Mc Guinness and Daniel Breslin stood out. Referee was Joe Mc Hugh.

Temple Domestic Appliances Division One
Gweedore Celtic 3
Cappry Rovers 1
This match was played at the Screaban in blustery conditions. The Celts started brightest and took the lead through Tommy Diver when he nodded home a long throw in from Odhran Mac Niallais. Odhran was again the provider on 40 minutes when he threaded a ball through to Colin Ferry who doubled the advantage.
Cappry had a man sent off late in the 1st half however they started to crank up the pressure on the Screaban men in the 2nd half and were unlucky not to pull one back after Christopher Sweeney pulled off a great save from a spot kick. Shortly after they reduced the deficit when Ronan McHugh finished after being put through on goal. Late on in the game the Screaban men secured the 3 points when Tommy Diver scored his second when he volleyed into the top corner from well outside the area to make it 3-1.
The Celts held on for the win as Rovers lost their first game of the season. Great team performance from Gweedore. Referee: Kevin Logue.

Glenree United 1
Bonagee United 4
The home side took the lead in the 35th minute when Danny Langan curled a fine free kick into the top corner .
Both keepers had relatively little to do in the first half but that changed in the 2nd half when John Cunningham had to lift the ball out of his net four times.
Goals in the 59th minute from Ryan Coyle, Noel Gillespie with a fine header in 65th minute, a Glenree OG in the 75th minute and the fourth coming in the 87th minute from 40 yards from Declan Brown.
A good team performance from the visitors in the second half proved to be vital.

CT Ball Division Two
Cranford United 2
Kerrykeel ’71 F.C. 2
Kerrykeel started the game on top and had a number of chances before taking the lead through Jimmy Coyle on 20 minutes. Cranford then had some half chances just before half time.
After the break both times were creating chances and on 60 minutes Donal Callaghan soared highest to score from a corner to put Kerrykeel two up. This kicked Cranford into life, creating a number of great chances. Cranford got one back with a neat finish from Joe Gallagher from inside the box. Cranford pushed hard and Brendan Giles won a penalty which Andrew Kelly converted to make 2-2. With the last kick of game Dale Mc Fadden broke free but the Kerrykeel keeper pulled off great save.

Ballybofey United 2
Drumkeen United 1
League Leaders Ballybofey United welcomed near neighbours Drumkeen United to Finnside for this CT Ball Division 2 encounter. The home side took a first half lead when Brian Lafferty Jnr. netted after been set up by Damien Glackin inside the opening ten minutes.
The lead lasted well into the second half when the ever dangerous Peter Mc Namee shot past Chris Patton to level the scoreline. Drumkeen were then struck a blow when they were reduced to ten men, having used all their subs, losing a player through injury. Ballybofey were now too strong for the visitors and Lafferty was again on hand to head home when Glackin crossed the ball into the six yard box after good work along the left hand touchline by Gavin Doherty.
Referee: James Malseed.

Lifford Celtic 3
Whitestrand United 1
Lifford started bright in this game and should've gone in front on 5 minutes from a great free kick from David Gethins. Lifford did go one up after 10 minutes when a great ball from Daniel Lindsay played in Jason Mc Brearty and the striker kept his cool to chip the keeper from 20 yards out.
David Gethins then played a ball into the box on 30 minutes and striker Hamilton headed just over under pressure. Lifford piled on the pressure and went close again when Matthew Carlin played in Mc Brearty but with the angle against him he fired just wide. Whitestrand started the 2nd half well and forced Lifford keeper Dylan Early into a fantastic save on 50 minutes.
The hard work paid off for an improved Whitestrand on 55 minutes after a nice move in the middle caught out Lifford’s defence and Kevin Mc Carry finished into the bottom corner to level the game. This sparked Lifford into life and the home side were soon in front again when James Connolly fired past the keeper after a nice pass from Matthew Carlin.
Lifford sealed the points on 75 minutes when Connolly found the net again after Carlin won a tackle in midfield and sent him clear to finish into the bottom corner. This was a hard earned three points for Lifford on a heavy pitch. Jason Mc Brearty was excellent for Lifford, team performance from Whitestrand.