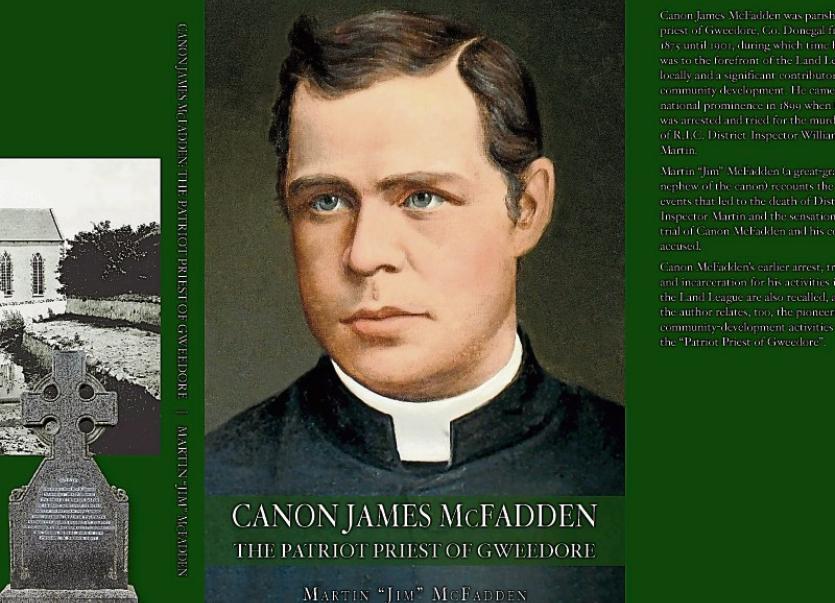 The cover of the new book on Canon James McFadden

A new book called  “Canon James McFadden, The Patriot Priest of Gweedore” will be launched in Carrigart this weekend.

The official launch will be performed by Mary Gallagher, Falcarragh, great-grandniece of Canon McFadden  in the Parochial Hall, Carrigart on Saturday 19th November 2016 at 7pm

The book is being published by author, Martin ‘Jim’ McFadden from Carrigart, a relative of the later priest who says the new title is simply the resurrection of a chapter on the noted clergyman that appeared in a local history book by Proinnsias O Gallchobhair, which is now out of print.

Martin explained: “I personally can't take any credit for this publication.  I am only reprinting chapter seven of Proinnsias O Gallchobhair's ''History of Landlordism in Donegal'' , which is now out of print. I would also like to thank and acknowledge Mary Gallagher, daughter of the late author for permission and approval to use the book.”

He added: “My reason for doing same is to honour the upcoming 100th anniversary

of the death, 18th April 2017, of Canon James McFadden, my great-granduncle.

“I would also like to add that profits from the sale of this book will be going towards having Masses offered for the souls of all ancestors and loved ones of everyone who should purchase this book.”

Martin has also penned his life story in an autobiography called “Don’t Go There”.

This fascinating account of his life will also be available on the night. Both books are priced at €10 but will be on sale for a special offer price of just €15 for the pair at the launch.

To find out more about Martin and his writings visit www.martinjimmcfadden.com