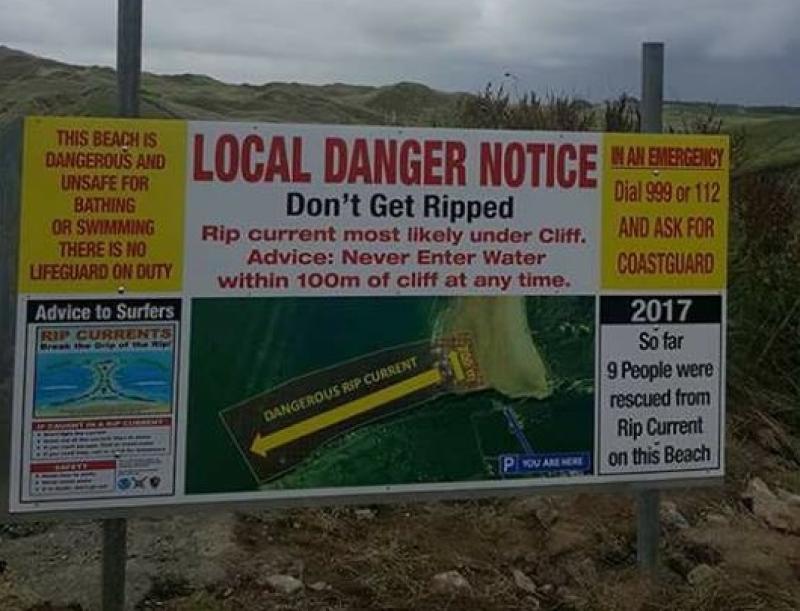 Members of the local community have erected a sign at Tullan Strand to warn the public of the rip current at the beach, following a death in the waters last year and an incident some weeks ago, when footballers were rescued from the sea.

“I suppose it’s a community response to a problem for our local area,” Killian O’Kelly, a local businessman and member of the local RNLI said. “No one in Bundoran wants to see another tragedy at Tullan Strand.”

Killian, owner of Turf ‘n Surf Lodge and Surf School in Bundoran, said they would also like Donegal County Council to engage with the community on issues of signage, access and lack of amenities at the well-used beach.

Members of the Fermanagh Minors football team were rescued from the waters off Tullan on July 15th, when they got into difficulty. Later that week, the inquest into the death of Corporal Gavin Carey, who drowned at Tulllan Strand last August, was held. At the inquest, Donegal coroner Dr Denis McCauley said he would be writing to the county council to ask them to review the signage at Tullan.

Killilan said Tullan Strand has gotten so busy that the existing sign to warn people against swimming in the Tullan waters was no longer enough.

“After what happened last year and nearly happened two weeks ago, we decided the signage was not really adequate,” Killian said. The community paid for the sign that was erected last week.