Anniversary celebration set for this Friday 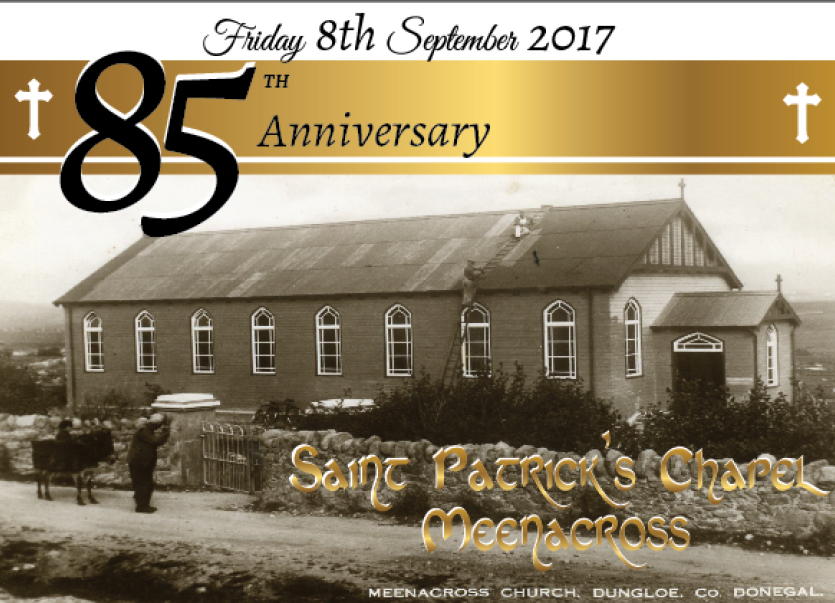 From the cover of the booklet to commemorate the 85th anniversary of St. Patrick's Chapel in Meenacross.

The community at Meenacross will celebrate the 85th anniversary of St. Patrick's Chapel this Friday, September 8th, with “Mass, bands and tea” … and a tree.

Fiona Sweeney of Marameelan, librarian at Leabharlann Phobail na Rosann, Dungloe, was researching another subject when she stumbled across the 1932 opening date of the church.

“I quickly did the sums in my head and thought, ‘Wait a minute, we need to do something about this,’” Fiona said. She spoke with a few other people in the community and they organised a public meeting, which drew a good turn-out and strong support for the celebration, and they formed an 85th anniversary committee.

The Friday, September 8th anniversary celebration also features the area’s rich band tradition. The event will kick off with the Meenacross Band; the three Maghery Bands, including the treble All-Ireland-winning Maghery Senior Band; and the Dungloe Band marching from the Meenacross Social Centre to St. Patrick’s Church for the 7.30pm Mass.

After Mass there will be a tree planting at St. Patrick’s followed by a band recital. Then everyone will be invited to the social centre “for tea and buns and whatever’s going,” the committee said.

There’s also an anniversary booklet, detailing the history of the church and many of the people who played a part in it.

For reasons lost to time, the community missed the 75th anniversary, so this one is special. “At the end of the day some things are worth celebrating,” the committee said.