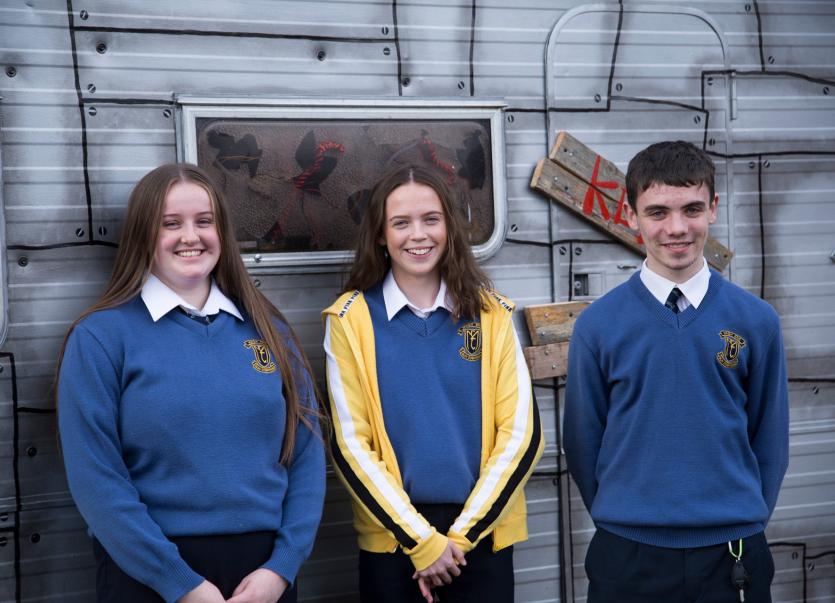 The Transition Year students at Coláiste Mhaigh Éne in Bundoran got an unusual insight into physics this week when a peculiar looking caravan arrived at the school as part of Science Week 2018.
The caravan, resembling a type of metallic machine on the outside, something you could imagine out of a Tim Burton movie, turns out to be an interactive video game about science on the inside.
This outreach project is called The Ultimate Learning Experience and is initiated by Maynooth University and funded by Science Foundation Ireland and the Institute of Physics.
It has been made by a team of artists, film-makers, scriptwriters, designers and scientists who describe it as a light-hearted and educational exploration into the laws of physics and science, built specially for Science Week 2018.
When students enter the caravan they take part in an interactive ‘choose your own adventure’ game where the players follow the story of a mad scientist Dr. MindFlip and his robot assistant ANUSTASIA.
The students work their way through the doctor's scientific archives from years past learning some fascinating facts about the universe and how it works.
Blaine Carty, Sarah Delaney and Susan Gallagher were among the first to get to try the game.
After completing the game successfully they had learned about ‘The Physics of Sound’, ‘Light as a Wave’ and ‘Gravity’.
They all agreed the experience made them more familiar with physics and some of them even considered doing physics for their leaving cert as a result.
After Monday’s event in Bundoran, The Ultimate Learning Experience continued its tour around Ireland and visited schools in Co. Roscommon and Co. Louth as part of Science Week 2018.