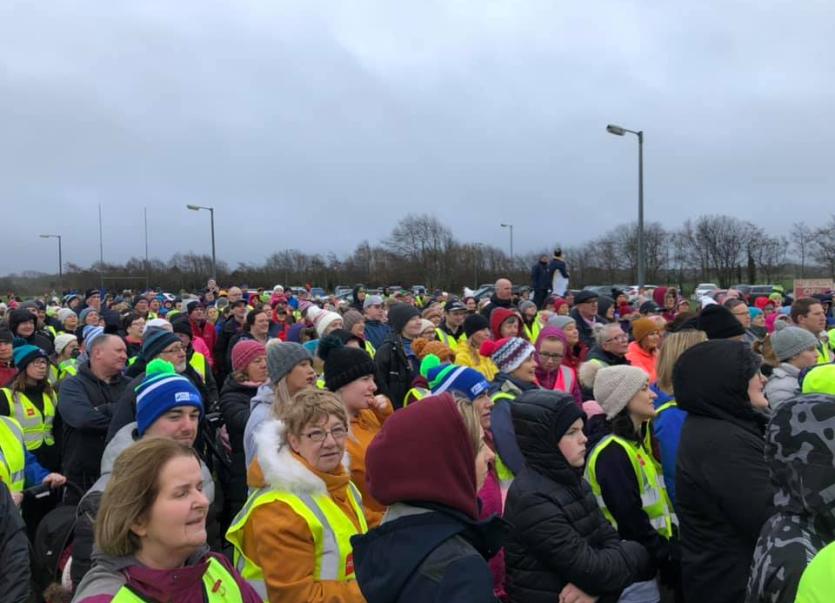 A huge crowd at The Lakeside Centre in Ballyshannon

The Operation Transformation crew in Ballyshannon this morning got something of a surprise as huge numbers of people made their way to the Lakeside Centre to join local man Cathal Gallagher who was heading up a 3k walk from the centre to mark National Walks Day.

Conservative estimates put the attendance at more than 800.

In windy and at times wet weather that might have put off the faint-hearted, the turnout was extra special and really was a terrific salute to 48-year-old paramedic Cathal - a man who always has time for everyone and is hugely popular with all.

Cathal said he was really moved by the support shown for him. “This was very special today in difficult weather conditions and I am do grateful to everyone for showing up, it’s a great lift for me, thank you to everyone,” he said. Cathal was selected as one of the five leaders to take part in the RTÉ series, Operation Transformation and the response to his first appearance on the show last week has been compelling, locals voting with their feet today to show how much they want him to hit his goals in the massively popular tv show.

The walk, which had a delayed start because of the big attendance, saw walkers four abreast all the way from the Aodh Ruadh Bridge back into the town as they went out of sight at the local bus stop.

ALSO READ:  Cathal Gallagher to lead up one of five Operation Transformation walks this weekend

Gardaí the Democrat spoke to agreed that they thought there were at least 800 people, if not more, on the walk with Cathal.

The tv crew were thrilled with the response and the eager crowd were told by Mr Motivator himself Karl Henry that the attendance was “one of the biggest” ever for such an event. Bridge to Bridge: This picture gives a sense of the huge numbers walking today - this image taken from the Allingham Bridge in the town centre shows a huge train of people right back to the 'new' Aodh Ruadh bridge...  Picture Aiden Likely Facebook

I understand one man was so inspired by Cathal’s story on the first night of the show broadcast last Wednesday, that he travelled all the way from Belfast this morning to show his support.

There were huge numbers of people there from nearby towns such as Belleek/Garrison in Fermanagh, Kinlough/Tullaghan in Leitrim and Cliffoney and Grange in Sligo, while dozens came from all parts of Donegal.

Cathal Gallagher was the star of the show and was clearly thrilled by the huge response, happily posing for photos with all who came his way.