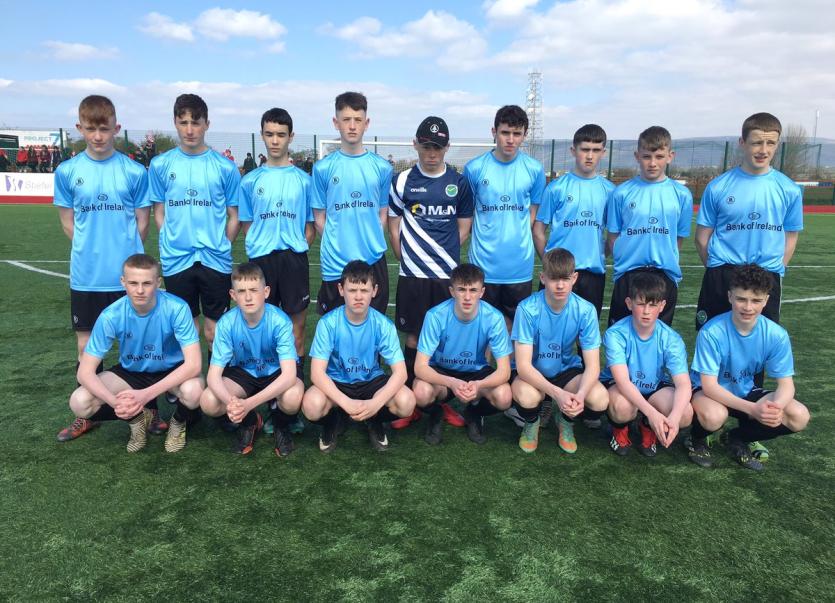 Pobal Scoil Cloughaneely collected another All-Ireland title when their U-15 boys defeated Coláiste Ghlór na Mara, Baile Brigín, Dublin in the final at the Showgrounds in Sligo.
It took extra-time to decide the issue with PCC captain Dáire Ferry the matchwinner, converting a free kick from inside his own half early in the first period of extra-time.
The game had finished level one goal each after a titanic struggle. The Dublin college had a goal disallowed in the opening minute and PCC took the lead after 11 minutes with Jamie Brennan on target.
They had to rely on their 'keeper Oran Craig to keep them ahead and they kept the lead until early in the second half when Baile Brigin equalised throgh Killian Cailloce.
Both sides had chances before the game went to extra-time. It was then that captain Ferry stepped forward to score what proved to be the winner.
After that the PCC boys put up the shutters with 'keeper Craig making a number of good saves.
The winners were well served by Dáire Ferry, Cathal McGeever, Tiarnan McGinty, Jamie Brennan and Conor Hanna.
PCC: Oran Craig, Padraig Coyle, Ryan Gallagher, Ethan Friel, Dáire Ferry, Cathal McGeever, Jamie Brennan, Ethan Doherty, Joe Doogan, Paul Johnston, Tiernan McGinty, Conor Hanna, Lorcan McGee, Conor Harkin, Ciaran Terry, Shane Cannon, Ryan Moffit, Donal McGee, Ryan McCallion, Killian Durning, Mark Coll.
Teachers in charge: Chris Smith manager; Ciaran Coll, Raymie Moran assistants.