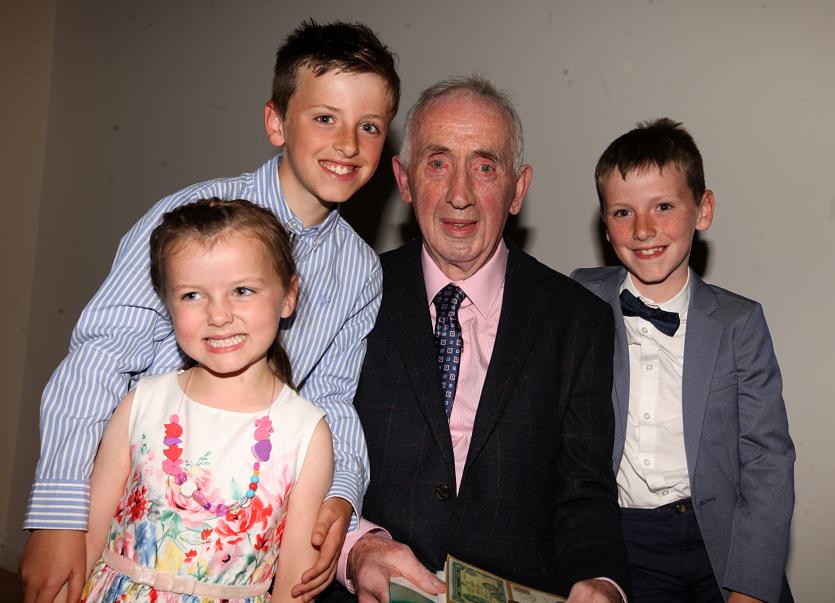 Richard McCafferty at the launch of his book 'A Year's Harvest' in Ballyshannon, pictured with his grandchildren Ailidh, Fionn and Iarla Hartin Pictures: Thomas Gallagher

Harvest time is a season of wasps and mellow fruitfulness-a time when Mother Earth flings out her fruit before dying in ice.
And a highly intelligent but most modest Lisahully man has certainly brought home a rich harvest at a memorable and well attended book launch in Rockfield Community Centre.
This was an historic and emotional night for Richard McCafferty and his family, but also an immensely proud night as his wonderful paean to the past “A Year’s Harvest” was launched on the site of the school he first came to as a five-year-old back in 1950. Richard came under the influence of Big Frank O’Donnell, a Gaelic giant who was the “Michael Murphy of his era” according to the soft- spoken Richard.
Richard’s labour of love is lined with photographs and memories, stories and scealta of sidhe, of ancient customs, of colourful characters, of smugglers, of gentler times and is a memorable sketch of life in Camlin Castle, of characters like Pat Fannon, Anna McCabe, Cissie McCauley and his own father Dick McCafferty was a fine seanchai also.
On Friday evening, in golden sunshine well-earned tributes were paid to the ex-Glenties Comprehensive school teacher whose talents are truly eclectic.
MC Sylvester Maguire said this was a special night for Richard and his family and it was a great privilege for Rockfield to be launching a book by “one of its own”.
“Rockfield was the place where it all began for Richard and this is evening for friends to have a chat together in honour of a local hero”. Richard’s former teaching colleague in Glenties, and Glenties native, Michael Ward paid a warm tribute to his old comrade.
Mr Ward, who worked along with Richard in the ESB in Ballyshannon as fitters, before going to Dublin to train as teachers, said he was a life- long friend of the author’s.
He recounted how their paths were inextricably linked over many years.
They were room-mates in Dublin and were part of a band called “The 23 Group” and Richard was the lead singer.
“He could rival Larry Cunningham back then”.
Since 1983, Michael and Richard were teaching colleagues until the mid- Noughties.
“He has a very good memory and that is obvious from the content of his book and you can’t Google that sort of information, it has to be remembered from tales told way back in time.
“Richard also had a keen interest in Glenties folklore, he has a keen interest in local history and unrecorded stories, and he has a great capacity to remember dates and times very well.
“He was a good footballer and hurler in his youth”.
He added: “Richard is a very busy man as he was an active member of the Glenties Tidy Towns Committee and was involved in the piped TV and spent a lot of his time in maintaining it.
“Richard was cameraman and videotape editor and was also a member of the church choir, a man of many talents and that is from one who knows”.
“Richard, your book is hugely interesting and entertaining and is not just for readers in south Donegal, but for readers all over Ireland”.
Launching the book, another old friend, Micheal MacCarthaigh from Portnoo, said he knew Richard as a “great colleague, a very reliable friend and he has put huge work into this book”.
“Camlin Castle is very well covered, the Tredennick’s and the landlord system and how it worked, is also very apparent.
“It is a very attractive book with some lovely photographs.
“Belleek Creamery is also very well brought to life and anecdotes of autrefois and the voice from the grave in Teetunney is very well brought to life as are the fairies and the banshee”.
Speaking to the Donegal Democrat, the author said it was a very emotional night for him and his family.
“I came here to Rockfield on May 1 1950, and I was five years old and my brother was six, the mistress was not in and Master McGonigle was there.
“I did not say anything that day, but I have great memories of this place and of Big Frank O’Donnell who could go up and catch a ball with one hand.
“We thought we were in Heaven.
“The reason I wrote the book was when my daughter was doing a family tree and that sparked me to find out more about our background.
“It started with genealogy and I wrote things down as I heard them and that is how I started it.
“And it was and is a real labour of love”.