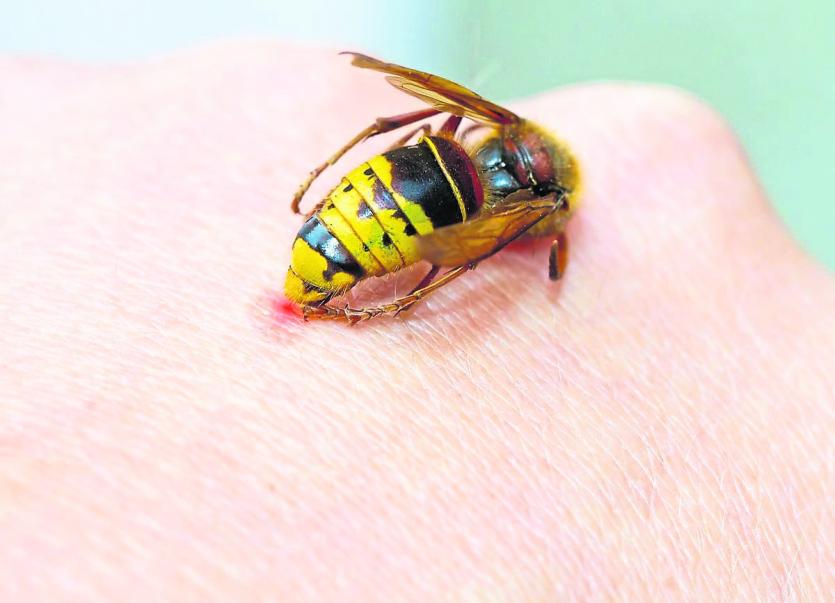 August until the end of September would generally be considered wasp season in Ireland.

The past few weeks have seen a remarkable increase in enquiries in the pharmacy regarding stings, and wasp stings in particular. Wasp populations peak and trough depending on weather conditions but the period from the beginning of August until the end of September would generally be considered wasp season in Ireland.
There are two main species of wasp in Ireland, the common wasp and the German wasp, and these insects usually spend the early part of their lives tending to and feeding their larvae in nests. However, once these hatch, usually in the summer months, the wasps have more time to go in search of their favoured sugary snack, nectar. Unfortunately, this coincides with the time when many of us are outside, often indulging in sweet treats such as ice creams and sugary drinks that wasps may mistake for nectar. To further compound matters, worker wasps are approaching the end of their life-cycle at this time of year and will be more aggressive and likely to sting.
Obviously the best way to avoid a sting is to cover up and avoid, or be careful around areas where wasps may congregate such as rubbish bins or flowering plants. We should also refrain from panicking and waving our arms around when in contact with wasps. Most insects only sting humans as a defence mechanism and wasps will perceive these actions as an imminent threat, stinging as result. Bright coloured clothing and fragrances such as perfumes or shampoos can be mistaken by insects as a source of sugar so avoiding these may reduce our attractiveness to wasps.

How to treat a wasp sting

Unlike bee stings, where the sting is often left in the wound, wasps do not leave a sting behind, instead injecting venom into their prey. With bee stings it may be necessary to remove the sting using a hard edged object such as a bank card but this is not necessary with wasp stings.
In some cases a localised allergic reaction to a sting may develop where a larger area around the bite becomes swollen and painful for a longer period.
This is not usually dangerous unless it affects the airways and antihistamine tablets may help to alleviate symptoms.
Should a sting become infected, the area may become more painful, turn redder and pus may accumulate at the wound.
In more severe cases, flu-like symptoms may be experienced. Suspected infections can require a trip to the GP as antibiotics may be necessary.
On very rare occasions a more severe allergic reaction (anaphylaxis) may occur almost immediately after being stung causing breathing difficulties, dizziness and a swollen face or mouth. Should this occur, emergency medical treatment should be sought as it can quickly become life-threatening.