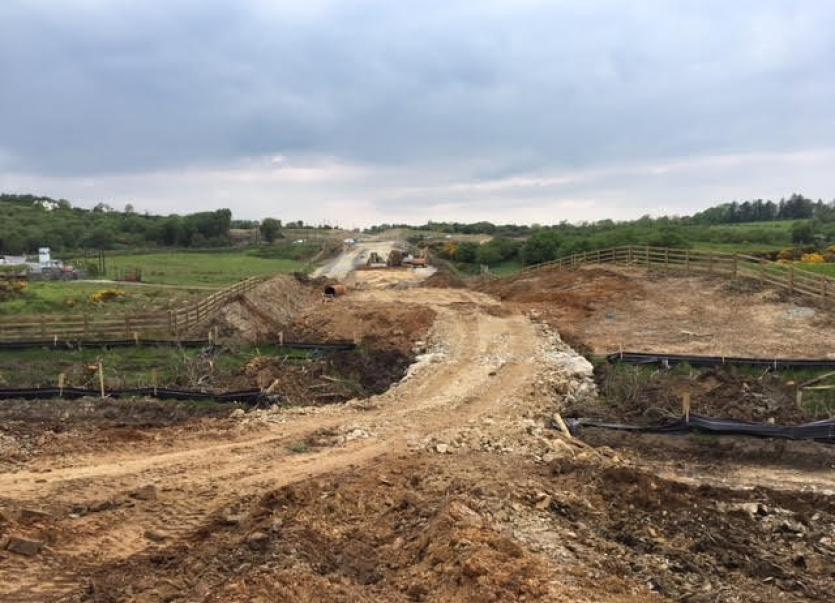 Then and now ...a section of the N56 Coolboy to Kilmacrennan when it was being worked on

Motorists all over Donegal and particularly those that use the road leading out of Letterkenny going towards Kilmacrennan, will celebrate today as the long-awaited N56 Coolboy to Kilmacrennan Scheme will be officially up and running this afternoon at 2pm.

Minister for Education and Skills, Joe McHugh TD, and the cathaoirleach of Donegal County Council, Cllr Nicholas Crossan, will cut the ribbon to mark the opening of the €18.7m project.

The 3.1km scheme, which has seen the removal of the notorious ‘Blue Banks’ bends is a major development. They had been identified many years ago as needing urgent improvement.

It was widely accepted that the road alignment there fell substantially short of normal national roads standards. The section at the Coolboy end, known locally as the 'Blue Banks', was particularly poor comprising of tight bends and steep gradients

The old route was also very narrow, (approx. 5.5m –6.0m wide) and restricted visually, both on the N56 and at junctions/accesses. Roadside development there was also extensive and in some instances very close to the road edge

The road is also a key transport corridor to the north-west of Donegal including Glenveagh National Park, Donegal Airport and the Gaeltacht.

Alongside the new road, a two-metre shared footway/cycle track has been created on both sides of the road and it is hoped that this new shared track will be extended to Letterkenny. The delivery of this scheme is the culmination of over eight years work by the Donegal National Roads Office and is a continuation of the N56 Mountaintop to Illistrin project completed in 2009.

The original road had a narrow carriage way, no significant verge and a number of poorly aligned junctions, accesses and entrances. The new scheme has seen the widening and realignment to a seven metre carriageway with hard strips and verges.

In collaboration with this project, Irish Water constructed a new trunk watermain and distributor water mains serving Letterkenny and its environs adjacent to and along the N56.

The official opening will take place at Keenaghan in Letterkenny.