People in Castlefinn sitting up all night in fear of floods 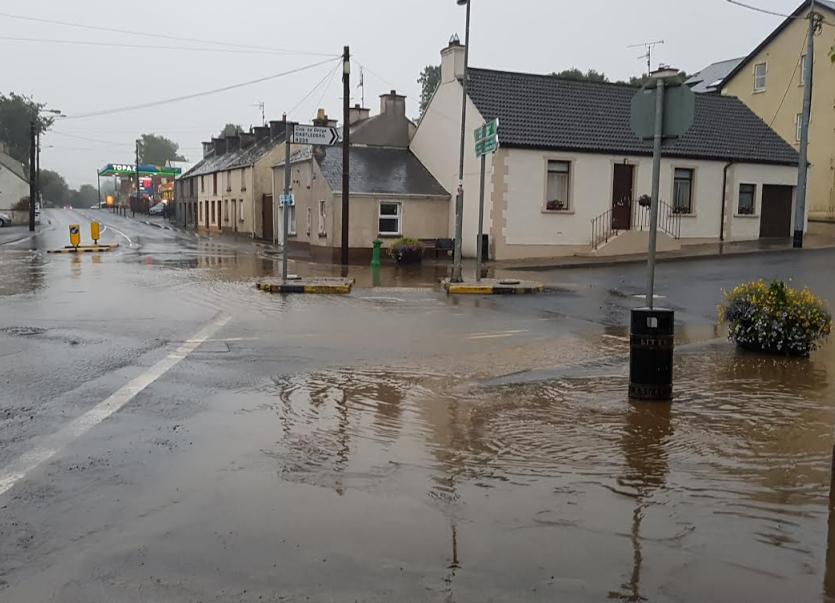 Unsettled weather with the risk of further heavy falls of rain is threatening to keep the people of Castlefinn awake this week.

According to their local councillor, once the rain starts, locals are sitting up at night in case flood waters start coming in their doors.

The claim came from an angry Cllr Gary Doherty. He was speaking at the last meeting of the Lifford-Stranorlar Municipal District following a council report on the work due to be done in Castlefinn as part of Catchment Flood Risk Management,(CFRAM), project to deal with flooding from the River Finn.

He was annoyed that his home town which has suffered severe bouts of flooding over the past few years, was still no further forward when it came to prevention measures promised last year by Minister of State at the Department of Public Expenditure and Reform, Kevin Boxer Moran following the spate of floods in 2017.

Councillors were told by Paul Gallagher from the council's environmental services section that the separate Flood Relief Scheme (FRS) for Castlefinn had been identified as a priority scheme to be delivered in the first tranche of spending during the Office of Public Works (OPW) ten year plan and were a key part of the overall flood risk management strategy set out in the National Development Plan 2017 -2028.

He added the council and the OPW were currently preparing a design brief for the Castlefinn FRS and once a consultant had been appointed the scheme would progress through progress through five stages of delivery, scheme development and design, planning, detailed construction design and tender, construction and delivery but each would need time to include things like will include periods of exhibition/consultation and the procurement of specialist services such as surveyors and contractors.

His report also promised that the council in conjunction with the OPW and councillors would work  together with the local community to deliver the recommended flood relief works for Castlefinn as early as possible.

He added Castlefinn was one of five design briefs that was currently undergoing an internal review and would be going to the Office for Public Work for sinal sign off in the coming weeks with a view to appointing a consultant early next year.

However Cllr Doherty said there had been no evidence of the council working with the local community in Castlefinn. He pointed out that he had asked at their last meeting in July for the staff members appointed to oversee the CFRAM mitigation works would attend municipal district meetings and answer questions the councillors had on behalf of the communities they represented.

"But here we are again in October and I still haven't meet these people and I swear, I really am at my wits end about this. I asked officially for a report and all I got was the same report in front of us today. I live in Castlefinn, I live in this community and I have family members directly affected by this as well as people I have known all my life. I know people who are sitting up at night time watching in case the flood waters rise and hoping it won't come into their house again.

"These communities are going to be decimated if they are hit again and over the last number of  weeks we've been watching as the flood waters have been rising every couple of days. It is simply unacceptable and these people haven't turned up to a meeting.

"I can't even ask them if they are doing a good job or what they are doing because they are not here, it's ridiculous, absolutely ridiculous. It's not often I lose my temper in here but I voiced their concerns in July and in a strongly worded email to the director of services as well and all I got back was this report. I'm honestly not happy at all," he said.

Cllr Doherty added the "community was completely in the dark" about what was being done.

"I don't think it's too much to ask that someone from the council would meet with the community and outline the process, what is going to happen and when. If they sit and say they don't kn0w that's fine but at least we will know the process is in train and the people are being informed because at the minute we are completely in the dark," he said.

Cllr Patrick McGowan added he agreed saying part of the problem was the fact that there were too many involved in these schemes.

"When we do get to meet these people and see the plans they have to go through every agency in the State ...and some probably not even thought up yet and is going to take such a long time. Everyone is blaming the council but the council is only ticking the boxes that the Government is putting in place.

Cllr Doherty proposed a meeting was set up between councillor, the officials involved in overseeing the CFRAM project and community representatives in November.