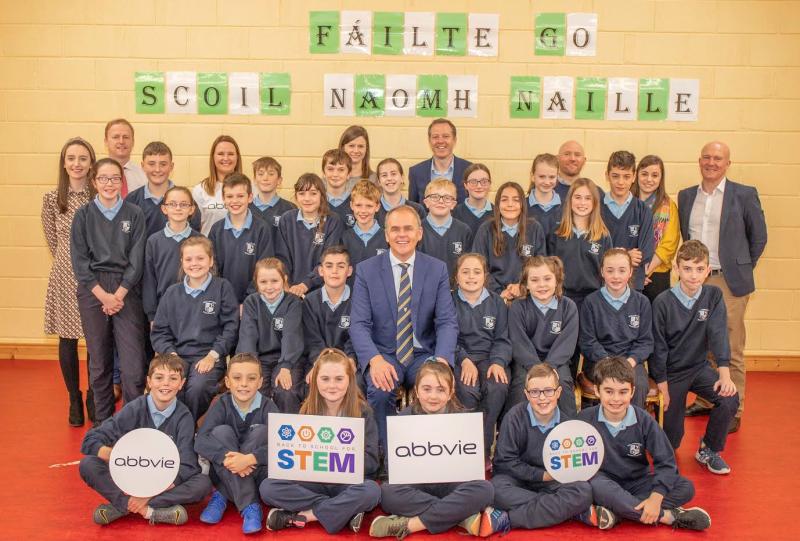 Minister for Education and Skills, Joe McHugh TD, joined students and representatives of the global biopharmaceutical company AbbVie at a special educational event at St Naul’s National School in Inver, on Monday.

The visit marked the official launch of the company’s Back to School for STEM programme, a schools’ outreach which promotes the job opportunities widely available in Ireland for those holding STEM (science, technology, engineering and mathematics) qualifications.

Employees from AbbVie’s five Irish offices and manufacturing plants will visit schools, including those they themselves studied at, to talk about the difference that those working in STEM can make for wider society.

Minister McHugh said: “This programme is about opening young minds to the possibilities that can be unlocked with expertise in STEM.

“Fifth and sixth class students in St Naul’s – and at the other primary schools which will be visited by AbbVie employees – will hopefully soon have the opportunity to select science, chemistry, physics and other STEM-related subjects as subject options. Frankie Doherty a scientist from Letterkenny doing an experiment with St Naul's NS pupils Rhianna and Eoin during Minister for Education and Skills, Joe McHugh TD, visit with representatives of the global biopharmaceutical company AbbVie at a special educational event.

"Ireland is a global hub for life sciences and technology, so STEM education is crucial to continued future economic success. I commend AbbVie for their community commitment in working with schools.

“It’s crucial we all encourage young people’s interest in STEM. Programmes like this can spark a love of science in children and put them on a path to incredibly rewarding lifelong careers,” he added.

Columba McGarvey, Site Director at AbbVie's manufacturing plant in Ballytivnan, Sligo, and a native of Teelin, spoke to the students about the wide-ranging and exciting career opportunities a STEM-focused career in the biopharmaceutical industry can offer.

AbbVie recently announced a €113 million expansion in oncology-focused manufacturing technology at their Ballytivnan site in Sligo. The company also has a second plant in the town. The investment will create approximately 100 new jobs over the course of three years in a variety of technical and manufacturing positions. Many employees commute daily from County Donegal to the company’s two locations in Sligo whilst a number of Donegal natives hold a variety of senior jobs within the US company in Dublin and internationally at other AbbVie locations such as Chicago and in Singapore.

Mr McGarvey was responsible for managing AbbVie’s plant in Puerto Rico when Hurricane Maria devasted the Caribbean island. He told the young students that successfully studying STEM subjects could literally open up a world of job opportunities.

“A career in STEM offers so many possibilities – ones that are fulfilling personally but, crucially, opportunities to positively affect communities and wider society at a time when multiple challenges face us. STEM can help you make a difference whether that be in helping to address climate change or being part of teams developing new treatments for cancer,” he added.

Frances Doherty, a Biologics Technician at AbbVie’s Ballytivnan site in Sligo, who is originally from Coolboy, Letterkenny, gave students her view on the benefits of working in a STEM job.

It is an important perspective at a time when, according to new research[ii], 64 per cent of girls in Irish secondary schools say they don’t know enough about STEM while 26 per cent of all students believe there are easier ways of getting CAO points than choosing to study STEM.

“One of the biggest misconceptions about STEM subjects is that they are too difficult to get into, and that they can hinder your progress. The truth is that studying STEM subjects strengthens your options and can set you up for multiple life-long career paths.

“If you are strong in these areas, you really do have the chance to change the world for the better. For example, Ireland is a global pharmaceutical manufacturing leader. Ten of the world’s top ten companies are based here, producing life-changing medicines that are distributed to people in need around the world. This is just one example, from just one area, of the many rewarding, challenging and interesting careers that studying STEM can help to unlock.”

Students on the day in Inver had the opportunity to participate in a number of STEM-related activities and experiments which helped to outline the key skills that students can acquire by studying STEM subjects.

School principal, Rory O’Donnell, thanked AbbVie for organising the initiative and paid tribute to Minister McHugh for attending the event and taking time out of his busy schedule to meet and encourage local students. Minister Joe McHugh TD, tries out an experiment with students Dylan and Jack with a little help from Caroline McClafferty during the global biopharmaceutical company AbbVie at the special educational event at St Naul’s National School in Inver, on Monday

“Role models are vital if young people are to be inspired and encouraged to consider committing to STEM educational pathways and potential careers. Students that develop an interest in STEM in secondary school are more likely to study STEM subjects in college. This programme helps open up their imagination to what’s possible before they have to make those subject choices, and that’s a good thing,” he added.

The STEM Gap in Ireland

According to the most recent Science Foundation Ireland (SFI) ‘Science in Ireland Barometer: An analysis of the Irish public’s perceptions and awareness of STEM[iii]’, 70 per cent of students believe STEM is too specialised for them, and 52 per cent of respondents were deterred from studying science and maths at third level, largely due to the way in which these subjects were taught at primary and secondary level.

AbbVie recently announced that it will be the main corporate sponsor of Sligo Science Week for the next three years. This commitment underlines the company’s continued support of science education activities in the wider North West region.