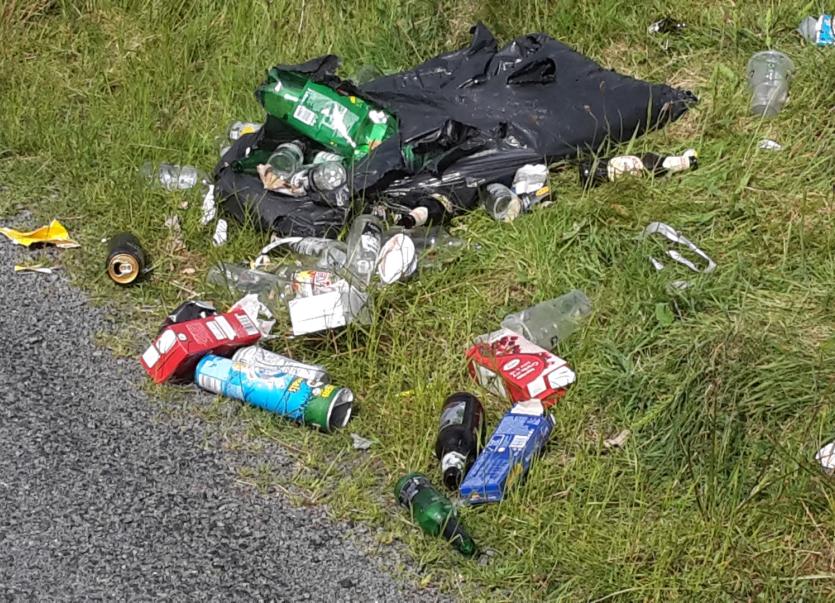 Scenic locations at all points of the Donegal compass have fallen victim to what has been described as “disgusting” illegal, lockdown littering and dumping.

Cllr Crossan said the dumping was not carried out by young people.

He added: “There must have been a van, or a trailer involved in this dumping. It is an absolute disgrace. The area was cleared only last week.”

A concerned member of the Dunree community also contacted Donegal Live regarding Bank Holiday littering in their area.

They said: “I took photographs of the litter, which was scattered around the fields at Dunree as you are heading up to the Fort carpark and the beach. I noticed it as I was out walking after the recent Bank Holiday. It was disgusting.

“Rubbish was just scattered everywhere. There were loads of bottles dumped. Maybe, there was a bit of a party down at the beach, I don’t know. I contacted Donegal County Council to get it lifted.

“There was just no room. It was absolutely jammed. It was Bank Holiday Sunday and Monday mayhem. People were shouting out their car windows. I would say people were well outside their five kilometre radius. People enjoy a day out at the beach but please take away your rubbish,” they said.

She said: “It is a terrible shame because with the good weather, the countryside has never looked better. The flowers are in full bloom and everything is absolutely beautiful. It is a shame that a few people insist on destroying it for everybody else.

“There certainly is a big increase in littering and people throwing litter about. I have seen it myself in different places. I would urge people to stop this behaviour. After all, it is very easy to dispose of litter in the proper way. It is not that expensive.

“Even at the Bring Banks, people are dumping cardboard boxes, which are not recyclable at these sites. I wish people would take the boxes home and use it the next time they are bringing material to the Bring Bank or dispose of it properly.

“Because the weather has been so good, it definitely has attracted a lot more people out to the beaches and the amount of litter there, at Ned’s Point and Buncrana Beach especially, was unbelievable. I was out helping to clear it up myself,” said Cllr Donaghey.

She added: “They were out at six in the morning clearing up. There were a huge number of bottles. I have to say, some people were very good. They left their rubbish beside the bins because some of the bins were filled to overflowing.

“One of the litter wardens told me that in April there was a 160 percent increase in use of the Bring Banks. It was good that people were being responsible and doing the right thing.

“If everybody does their bit, we won’t have these litter and dumping problems. Using the Bring Banks is much, much better than leaving bottles or broken bottles on the beach. Broken glass is highly dangerous because when people, and children especially, go to the beach, they just want to feel free, kick off their shoes and run along the golden sands. We do not want anyone getting a piece of glass in a foot. It is very irresponsible for people to break glass. Leave the bottles, do not break them and we’ll lift them and take them away,” said Cllr Donaghey.

Commending the peninsula’s Litter Wardens, Cllr Donaghey described them as “more than good.”

“They have been out early. One litter warden left his home at 5.30 in the morning to make sure everywhere was cleaned and ready to go.

“On one day in particular, after the recent Bank Holiday, they had two full pick up loads of litter from the beaches.”