'Why has 10% contribution been imposed on Donegal?' 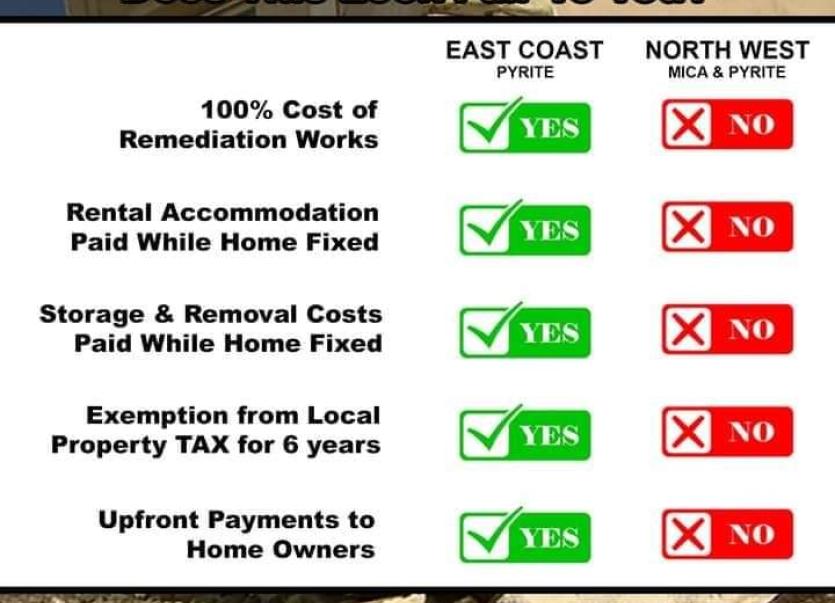 A graphic of the differences between the Pyrite Scheme and the Defective Concrete Blocks Scheme.

A Donegal homeowner has described as an “injustice” the 10% contribution being “imposed” on Donegal and Mayo applicants to the Mica Redress Scheme, when the same condition does not apply in the Pyrite Remediation Programme.

In an attempt to shed light on the matter, Paul Finucane from Clonmany in Inshowen has submitted a Freedom of Information request to the Department of Housing.

“I wanted to find out, who spoke up for us, if anybody. If anybody gave any consideration to where we were going to find up to €50,000, to contribute towards the repair of our homes. That is what it is going to cost if our home has to be demolished, with rent and everything else that goes along with it. I want to know why, if they are asking me to pay that, who made the decision and why they made it?

“I think people need to be more aware and better informed of the decision-making process and they maybe need to see the injustice in this. I am not sure if people do. I want to show people why somebody or a Government Department or some civil servant has  decided to put 10% on the people of Donegal and Mayo and no one else in the country,” said Mr Finucane.

Mr Finucane said the 10% contribution was inexplicable given the homeowners played no role in the crumbling of their home.

He added: “The Pyrite Scheme of 2013 on the East Coast, covering Kildare, Meath, Offaly, Fingal, Dublin City, Dun Laoghaire-Rathdown, South Dublin and just announced recently, Limerick, had no cost to pay for the repair of their homes or costs associated with renting while the work was complete.

“Myself and my partner, like many others, can not afford to pay anything towards the cost of repairing our home. We did not cause this problem. No one wants to live in a MICA home or deal with having to rebuild.

“The situation is putting untold stress on families and keeping children awake at night with worry. I believe we all need to take ownership of this information. I would hope it contains useful information to allow us to move the current scheme on to an equitable standard on par with that of the rest of the country.

“Having help to cover this cost would take a great amount of financial weight from our shoulders and we would appreciate each and every cent we can raise, which is why we have set up a GoFundMe page," said Paul Finucane.

Mr Finucane has also set up the Mica Defective Blocks Equality Group Facebook Page to try and address issues associated with the current Scheme and to try and gain support for dealing with those issues from others in the area.