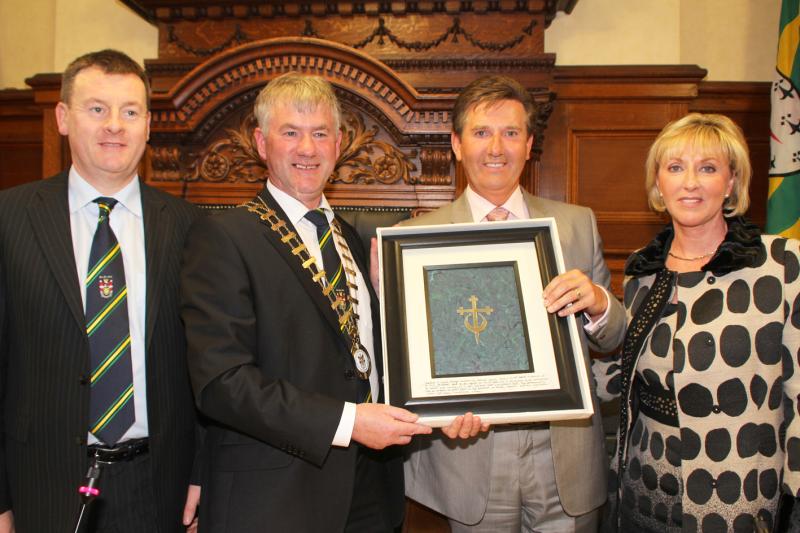 Pictured with the symbol that depicts the Freedom of the County, Daniel and Majella along with Co. Manager Seamus Neeley and Mayor Noel McBride. Photo: Matt Britton

A delve back in time and back to 2012 with some archive pictures as Daniel O'Donnell receives the honour of Freedom of Donegal.

The Donegal singing star was accorded the major honour in 2012 thanks to an initiative by Donegal Mayor, Cllr Noel McBride.

Tap on the arrow to go to the next picture and check out the full gallery.

Mayor McBride offered Daniel the Freedom of the County on behalf of the people of Donegal in recognition of the outstanding contribution that Daniel made as an ambassador for the county.

The famous singer has graciously accepted this rare honour and was conferred in June 2012 at an event held in Lifford.

Having released almost 40 albums and with sales in excess of 10 million, Daniel is one of the most successful recording artists that Ireland has ever produced.

With countless awards to his name, including a 1989 Donegal Person of the Year award and a 2002 Honorary MBE for services to the music industry and charity, Daniel is also a recognised philanthropist, and despite his successes, has never lost his identity or forgotten his roots.

Enjoy the photographs and if you recognise anyone, feel free to tag and share