Donegal property prices have increased by €8,000 in Q4 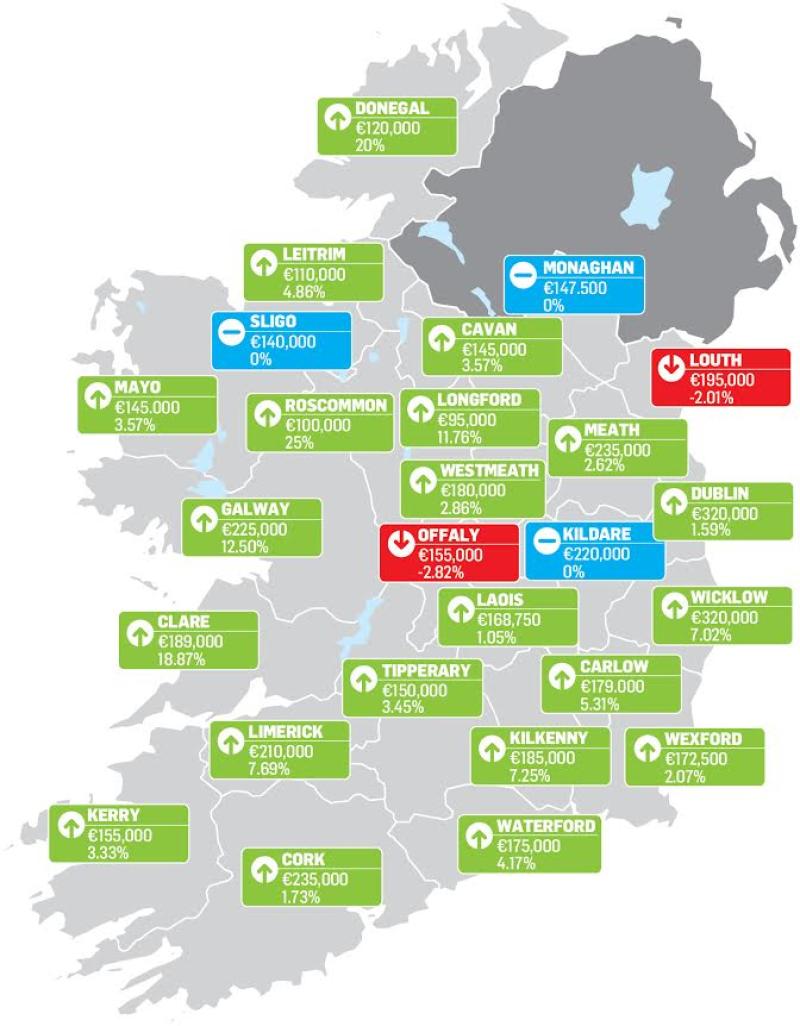 Property prices in Donegal have increased for the first time this year, according to the latest MyHome.ie Property Report in association with Davy.

The asking prices for a three-bed semi-detached house in the county stayed steady at €120,000 compared with Q3. Prices for this house type are up 20% from €100,000 this time last year.

Meanwhile, the asking price for a four-bed semi-detached house in Donegal saw a significant rise of 17% in the quarter to €132,500, up from €155,000 in Q3. This house type saw the same rise year-on-year. This is the highest price recorded in the segment in eight years, since Q4 2011.

The number of properties for sale in Donegal on MyHome.ie fell by 17% in the last quarter and by 46% compared to this time last year.

The average time for a property to go sale agreed in the county after being placed up for sale now stands at nearly 7 months.

The author of the report, Conall MacCoille, chief economist at Davy, said that the slowdown in house price inflation was to be welcomed and was inevitable given stretched affordability.

“Central Bank rules have stopped first-time buyers taking out too much mortgage debt and should lead to more realistic asking prices. Our analysis shows that the average residential transaction in Ireland (€292,000) is now 6.8x the average income of €43,000. This is only slightly below the UK’s ratio of 7x. This is the first time since 2012 that Ireland’s house-price-to-income ratio has declined.

“While there has been a 13% fall in new instructions to sell and an 11% drop in the total number of homes listed for sale, there are positives in the market. Mortgage lending to first-time buyers is up 15% in the first three quarters and transaction volumes in the €300,000-€400,000 price range are up 7% in the capital,” he said.

“It is also encouraging to see home building completions rose above 20,000 for the first time in the 12 months to September, and housing starts went above 26,000.”

Angela Keegan, managing director of MyHome.ie, said it was welcome that clarity was emerging regarding Brexit and Central Bank mortgage lending rules. “For most of the year, we understandably saw prospective purchasers being reluctant to take the plunge due to these two unresolved issues, leading to sluggish house price inflation. The clarity we now have will likely lead to more settled price expectations and a stabilisation of residential transactions in 2020.

“It remains to be seen how the Central Bank’s decision to keep mortgage rules unchanged and indeed Brexit will affect the Irish market in the long term, but at least now purchasers can plan without being fearful of any sudden shocks.”