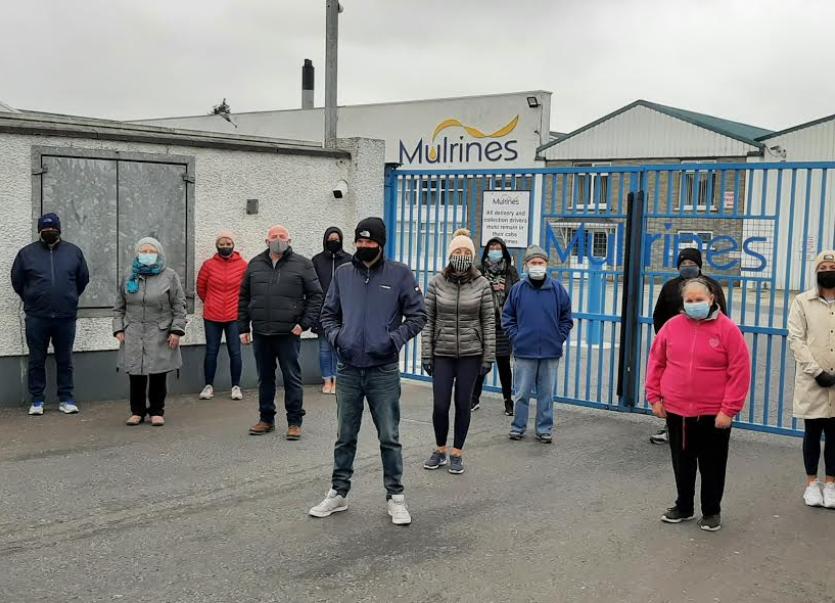 Sleep disruption, continuous noise at night, an obnoxious smell from its processing plant and a failure to engage with the residents living on all sides of the plant have once again been levelled at a Ballybofey juice manufacturing plant this week.

It followed a Covid compliant silent protest at Mulrines factory at Donegal Road, Ballybofey last Sunday where a representative sample of its neighbours gathered to outline their concerns over ongoing problems at the facility.

They all cited various problems that they claimed emanated from the factory which is having a detrimental effect on their quality of life.

They also claimed the company was ignoring their complaints and to date had refused to meet with them.

The issue was highlighted in February by 82-year-old Bernie Duffy. She said she had been turned into a ‘zombie’ due to ongoing noise and an inability to sleep at night as a result.

“I got a report form Donegal County Council saying there was noise pollution and was told the company would act on it but nothing has changed. I was told the firm did their own investigation but could find no problem.

“I installed triple glazing and other noise prevention devices that cost me up to €3,000 but they are unable to stop the noise from Mulrines,” she claimed.

She added the noise at night not only left her with an awful headache, it left her unsteady and tired for the entire next day.

“I'm still like a zombie in the morning, I don't know what I'm reaching for and I'm afraid I'm going to fall over all the time.

“I have no quality of life and this is adding worries and anxiety for my children. This is no way for an 82-year-old to be treated.

“I think most of my neighbours are in the same position thanks to the noise. This is something that can be fixed. It's time to do the right thing,” she said.

Other neighbours at the protest spoke of the noise problems and horrible smell they had to deal with, particularly at night.

Several speakers said they had no energy to work during the day after being kept awake with machines and vehicles operating during the night.

“We have been raising these issues for years but all we meet is a stone wall. The company can promise all the investigations they want and that's fine but we are at breaking point. All houses on either side of the factory and behind it are affected.”

One lady, who did not wish to be named, said she had no interest in anything but having a normal life.

“The quality of my everyday life is going downhill and it's the noise and smell that's doing it. Nobody should have to live like this.

“I feel sick every night once those machines go on. Surely the company can afford to invest in an operation that does away with the noise?

“All we want is to meet the owner and let him understand our concerns. We are not against the company, we like to see it doing well and providing jobs but as a local firm dealing with local people, they haven't stepped up to the plate yet. They should practice what they preach about being good neighbours. So far they've been the noisy neighbours that no one would want to live beside.”

Yesterday a spokesperson for the company reacted to the claims saying they would investigate this issue in detail.
“We are proud of being part of the Ballybofey community since 1919. In that time, we have and continue to work to the highest environmental and industry standards.

“As long standing members of the community, we are absolutely committed to being good neighbours.

“Our senior management team thoroughly investigate any complaints and will investigate this issue in detail.”