Could Raphoe become the Game of Thrones capital of Donegal? 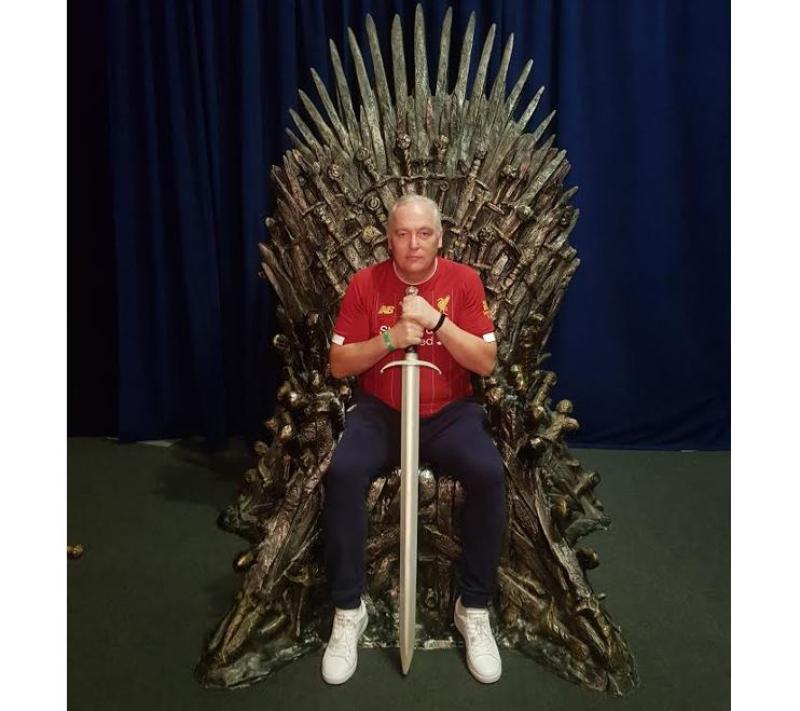 Could the tourism spin-off from Game of Thrones be replicated here in Donegal? Cllr Frank McBrearty Jnr, seen here at a Game of Thrones Exhibition in Belfast, thinks we've got what it takes

Game of Thrones, the epic tale of the families struggling for supremacy in the fictional world of Westeros, could find itself being replicated in real life in Raphoe.

According to one local councillor this, the most popular and successful fantasy TV series ever made, has already established no fewer than 25 locations around Northern Ireland on a new tourist trail so he asks why couldn't something similar be established here?

Not only is Raphoe the main town in the fertile district of East Donegal known as the Lagan but according to Cllr Frank McBrearty Jnr, there are thousands of years of history and monuments such as the Beltany Stone Circle, Raphoe Castle and St Eunan's Cathedral and many other historic landmarks just waiting to be discovered right here.

The councillor raised the need for such developments at the last meeting of Lifford-Stranorlar Municipal District where he left no one in doubt he was running out of patience too.

“I expect some type of report for our next municipal district meeting concerning the Raphoe Castle and the Beltany Stone Circle.

“I'm getting frustrated that senior people within the council are not able to get any engagement with the department concerning what we want to do with the stone circle and castle.

He added he was going to put down a motion at their next municipal district meeting calling for Donegal County Council to take control of both sites so they could look for the proper funding at national level and Peace IV to develop them.

“These two historical sites are unique in Donegal. The castle in Raphoe is unique because of the loyalist and nationalist battles over religion and identity.

“People talk about the history of the First World War and the Second World War, well the history of Raphoe and the many battles that took place there goes back many centuries. St Colmcille and St Eunan also had monasteries in the Raphoe area while the Beltany Circle dates back 5,000 years.”

He added the viewing point from the stone circle allowed one to see all over the north-west, including parts of Northern Ireland. However, he said while these advantages are  obvious, these locations aren't being developed like other parts of Donegal.

“We're not getting the same commitment as other parts of this county and we have far more to offer. We have the Riverine project in Lifford, many developments going on in Ballybofey and Stranorlar and a town like Raphoe with unique offerings I've already mentioned as well as St Eunan's Cathedral and graveyard are second to none.”

Cllr McBrearty recalled how he learned a lot about the local history of his town at national school, and  he heard their parish priest, the late Canon Deegan, talk about it many times and very few knew more about the town than he did.

“People might laugh at this but Raphoe is classed as the smallest city in Europe because of its cathedral status. There is a cathedral in Letterkenny but we are held in higher esteem because we are the original cathedral quarter of this county.

“East Donegal doesn't have beaches but we have a lot of other things to offer. You only have to look at what happened in Northern Ireland at the many  tv  and  historical programmes made there since Game of Thrones.

“We can do the same thing in Raphoe if we give people the facilities to do that. What Donegal Town has in their castle is fantastic but it's nothing compared to what we have in Raphoe.

“When you drive from Lifford to Raphoe the first things you see are the clock on the cathedral and the castle but we have to act now because that castle could eventually fall down and we won't have that cultural aspect left.”

He said it was time for a master plan, similar to what  the council served up for places like Sliabh Liag and Malin Head.

“I want the work to begin immediately that I have requested since I was elected to Donegal County Council 12 years ago.”