Height of existing turbines to increase 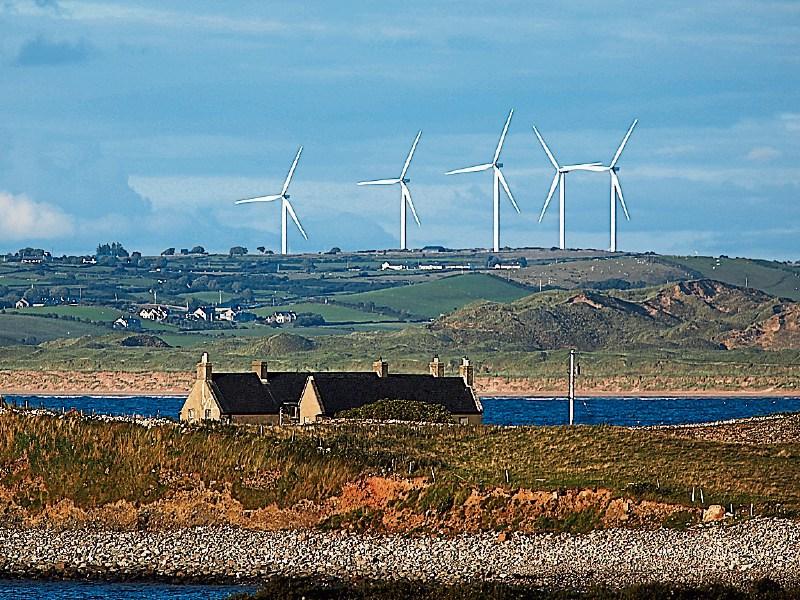 The wind farm at the Acres, Ballyshannon photographed from Tullaghan, Co Leitrim. The proposed wind farm at Behy could have tip heights as much as 20 metres more than the Acres wind farm

Plans are to be lodged in the coming week to construct some of the tallest wind turbines in Donegal at a site near Ballyshannon.

The proposals are to be lodged with Donegal County Council Council to construct seven wind turbines standing approximately 150 metres high in the Behy mountain area in Cashelard.

In addition planning permission is also being sought to raise the heights of the five turbines at the wind farm in the Derrykillew area from 135 metres to 150 metres.

Would be second tallest turbines in Donegal

The tallest wind turbines granted planning permission in the county have tip heights of 156.5 metres and were given the go ahead in June by An Bord Pleanála at a site in the townlands of Meenbog, Croaghonagh and Cashelnavean near Barnesmore.

The proposed wind farm could have tip heights as much as 20 metres more than the Acres wind farm near Ballyshannon which were granted planning with a maximum tip height of 130 metres.

The tallest wind turbines in the country are at Meenwaun Wind Farm in Offaly with tip heights of 169m.

The wind farm at Behy will be close to a small number of homes in the area.

Local communities could be set to get an injection of up to €160,000 once two the wind farms in the Derrykillew and Behy areas of Ballyshannon are up and running.

The cash will be available for community developments within five to 10 kms of the project.

The figures were displayed at a four-hour public consultation in the Breesy Centre in Cashelard, where plans for the construction of seven wind farm turbines standing approximately 150 metres high, for the Behy mountain area in Cashelard were unveiled.

Locals were told at the meeting that the money will be spent on local needs after consultation with the locals who have already identified priorities in these areas.

Very vivid photographs of the proposed turbines were on display in the Centre clearly showed how high the turbines would be standing above the landscape.

The turbines in Behy will be located on land that is owned by Coillte and planning permission will be sought shortly.

It is believed the planning process could take up to two years to complete.

When asked for the reason for the application for an increase in height the Democrat was told it was because they needed to keep up with new technology.

And there were no local objections to the five turbines when planning permission was sought a few years ago.

Donegal County Council initially turned down planning permission for the Derrykillew project and there was an objection from Northern Ireland.

But planning was then granted on appeal to An Bord Pleanala.

Tim Coffey Project Manager at Element Power, who “project manage both sites” said they had a “lot of local knowledge” on these projects.

“We have been able to put the turbines further back from the houses from an original 500 metres to over 600 metres of a set back for the Coillte project.

“Planning permission was granted in 2016. We think it is an exciting opportunity for the area as it will give employment opportunities locally.

“From the Acres project in Ballyshannon there was a lot of local subcontractors employed there while it was being built.

“At one time there were 13 locals working on the site and 11 local farmers benefited from the project.

“We are also focused on community benefits”.

Call for another public consultation

Meanwhile Belleek SDLP councillor John Coyle said he was not opposed to windfarms, but he was calling for another public consultation to be held in Belleek.

Speaking in the Breesey Centre Mr Coyle that the view from the Commons area and beyond showed that these turbines were very “intrusive on the landscape”.

“I came here because I believe that the people of Belleek and the Boa Island Road don’t get the chance to see exactly what is going on.

“It is impacting on their landscape and that is why I have asked the company to have a consultation in Belleek also.

“They said they would take it on board.

“This is a cross-border wind farm and the opinion of the people around Belleek is just as valid as those in County Donegal.

“This is to make sure that the people of Belleek can see and make an informed decision on the way they would like to see it proceed”.