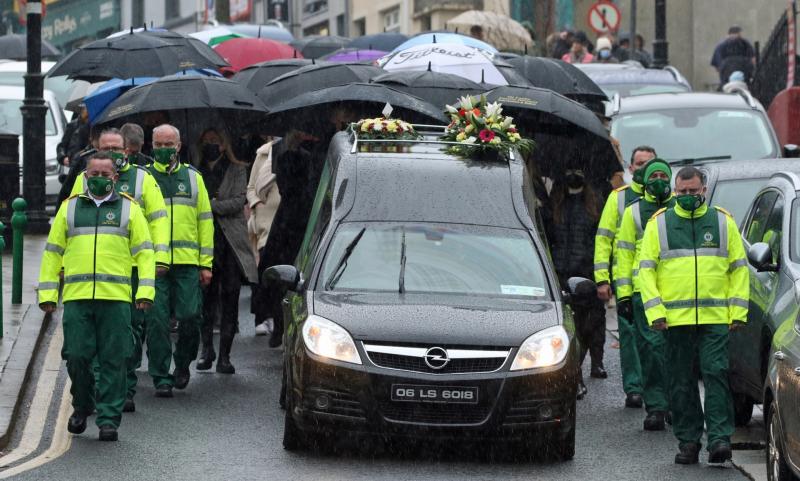 Ballyshannon came to a standstill as one of its best loved and most highly esteemed citizens was laid to rest.

The remains of paramedic Frankie O’Donnell of Rossnowlagh Road, Creevy arrived at St Patrick’s Church on Wednesday morning to the sound of bagpipes. The Fire and Ambulance Services provided guards of honour for their esteemed colleague.

Mr O’Donnell’s untimely death on Monday sent shockwaves through the community. A larger than life character who will be remembered for his warmth and kindness, he leaves behind his beloved wife Lisa and three children, Shannon, James and Emma, and a wide circle of family and friends.

In a deeply moving eulogy, his son James said: “You were the most genuine, humorous and funny man I ever met.

“I would love to speak about all your activities but I would be here all day.”

Referring to his father’s professional and voluntary work with the Ambulance Service, Fire Service and RNLI, James O’Donnell said: “To say that you worked all your life to save others is the most admirable way to say what type of person you were.”

Mr O’Donnell was well known for many roles with the Ballyshannon Musical and Drama Societies, and will be remembered with a big smile by all who were fortunate enough to witness his panto performances.

His son James raised more than a few smiles when he said: “Even though you dressed up as a woman so many times, I still said with my heart full of pride, ‘That’s my Dad.’”

James spoke of being inspired by his father’s love, strength and courage, concluding his eulogy by saying: “Even though we have to say goodbye to you, you will live and breathe through us until we meet again.”

As part of the Funeral Mass, symbols of Mr O’Donnell’s life were brought to the altar. They included a fire brigade helmet, an Ambulance Service jacket, a picture from one of the musicals, a rugby ball and the Number Four jersey, and a family photo.

Rev O’Fearraí said: “First and foremost the main thing for Frankie was his family.”

He described Mr O’Donnell as a really strong presence in the community.

Speaking of the sadness in the community, Rev O’Fearraí said: “When someone as young as Frankie is taken away from us, it is always an absolute shock. It is totally heart-breaking.”

The priest said it was particularly heart-breaking for Mr O’Donnell’s family, friends and colleagues.

But, he said, it did however provide an opportunity to see the remarkable way in which he had touched the lives of so many people.

Rev O’Fearraí told mourners that Mr O’Donnell was born in Dungloe. The family moved to Ballyshannon and set up the family business, O’Donnell’s Bakery in the Mall, living first in Castle Street and then in Creevy.

He began his working life in the family business, immersing himself in the community. It was during this time that he joined Donegal Fire Service and also served on the RNLI lifeboat.

Rev O’Fearraí said: “After his mother’s demise in 2004, Frankie reviewed his life and made a decision that he wanted to do something special with his life and help people.

“He joined the Ambulance Service in 2005 and gave an exemplary 16 years of service.

“Frankie loved his work. With his support and strong presence, he was able to bring great reassurance to many people when they were at their most vulnerable.”

Mr O’Donnell met his wife Lisa at the Millstone Hotel in Ballyshannon.

“They were grateful for the gift of each other, never taking each other for granted,” said Rev O’Fearraí.

“And they both felt very blessed with their children Shannon, James and Emma.”

The priest told Mr O’Donnell’s children: “He was so proud of the three of you. He always wanted the best for you.”

Mr O’Donnell was also very close to his wider family. Indeed, the celebration of his 50th birthday was the last time when all the family were together. His father Jimmy passed away in February, followed shortly afterward by his uncle Edward O’Donnell in August.

Rev O’Fearraí said he believed that Mr O’Donnell had his late father’s work ethic and sense of adventure, and he got the strong, gregarious personality and love of life from his late mother Esther.

“He loved meeting people and having the craic,” said the priest. “He had so many friends from near and far.

“Many people when you mention Frankie O’Donnell, a smile comes to their faces, because they remember a meeting or a chat that made them smile when they met him.”

Mr O’Donnell’s other community activities included being a member of the Board of Management at Creevy NS. He was also deeply involved in rugby for many years as a player, official and coach.

Rev O’Fearraí said: “Frankie will be remembered for the great pleasure and joy he brought to many people by using his own talents. He has enriched the lives of many.”

Following Requiem Mass, Mr O’Donnell was laid to rest in the Abbey Cemetery. As well as the official guards of honour, hundreds of people took to the street to pay their respects.

Predeceased by the late Jimmy and Esther, he was the much loved husband of Lisa and adored father of Shannon, James and Emma; and loving brother of Siobhan (Thomas), Mairead (Aiden), Emer (Stephen), Esther (Damien), brother James, father-in-law, sister-in-law, brothers-in-law, nieces and nephews.

On behalf of the family, Rev O’Fearraí thanked the Ambulance and Fire Services; paramedic Kenny Vaughan and Nurse Roper who were with Mr O’Donnell when he passed away; Angela Currid, Linda Gillespie and Farragh Bogle for the music at the Mass; and everyone who expressed sympathy, paid their respects or supported the family in any way.