Glenea United and McCafferty enjoying life at the top 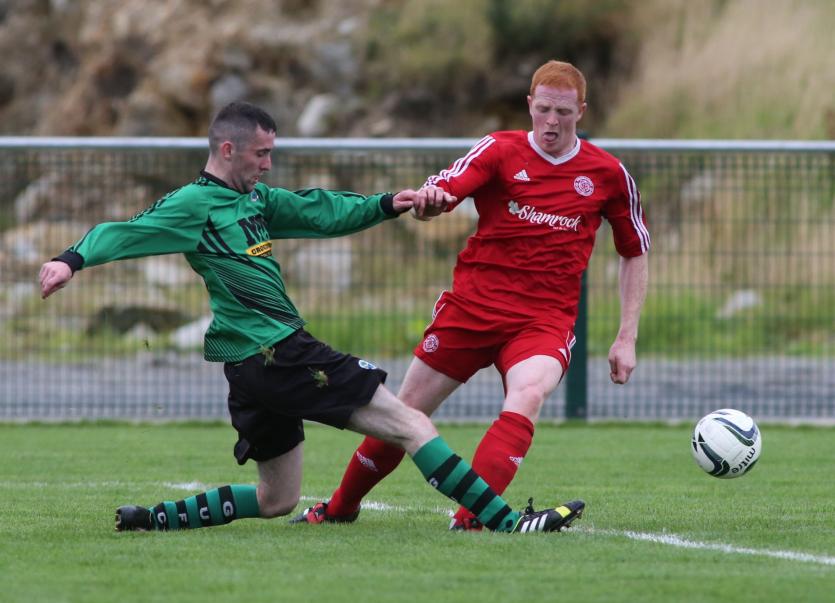 Glenea United's Dean Gallagher manages to clear the ball while under pressure from Drunoghill F.C.'s Christopher O' Donnell when the two clubs met at The Moss on the opening day of the season in Sept

Glenea United manager Anthony McCafferty admits that it was nice to see the club sitting pretty at the top of the Brian McCormick Sport Premier Division over Christmas.
The Glasserchoo outfit hold a four point lead over their nearest chasers as the half-way point in the season approaches.
However, the Glenea manager has pointed out that with so long to go in the season, it’s way too early to start thinking about a title challenge just yet.
This Sunday, Glenea meet the reigning champions Drumoghill FC, who along with Kildrum Tigers, are sitting joint second.
The fact that both Drumoghill and Kildrum have played two games less than the leaders makes this Sunday’s game all the more important.
“Drumoghill beat us 2-0 at their place when we played them in the first game of the season,” McCafferty said.
“We were really just finding our feet, but Drumoghill are a very good side.
“We might be top of the table, but Drumoghill and Kildrum haven’t lost a game between them yet, so they are the teams to beat.”
McCafferty was part of the Glenea side that last won the league title in 2011/12 and has taken over as manager this year from the long-serving Tom Coll. He has been more than happy with Glenea’s form this season.
“We’ve done very well after losing our first match,” he said.
“I think we’ve benefitted from the fact that teams are taking points off each other this year. That’s the way the season has gone so far.
“It has resulted in a very tight league.
The clubs at the bottom of the table aren’t that far behind those above them and if they could string a few results together, they would be up near the top.”
McCafferty has a strong squad at his disposal this year with players like Joe Coll, Paul Sweeney and Paddy Cannon all doing well - Cannon’s form earned him a call-up to the Oscar Traynor squad before Christmas.
Like most other clubs, Glenea have to contend with the problem of players being away from the county during the week, which does little to help with preparation for games on a Sunday.
There are players too who are also committed to GAA and Glenea are likely to be without Darren McGeever, Ciaran McGeady and Jason McGee this weekend due to county games.
Glenea’s last outing was an impressive 4-1 victory away to Rathmullan Celtic on December 11th.
“I know a good few clubs organised friendlies over Christmas, but we just organised a few training sessions,” McCafferty said.
“We’re looking forward to getting back at it, and Sunday’s game against Drumoghill is another big one for us.”
The match is part of a busy programme in the Donegal League on Saturday and Sunday.