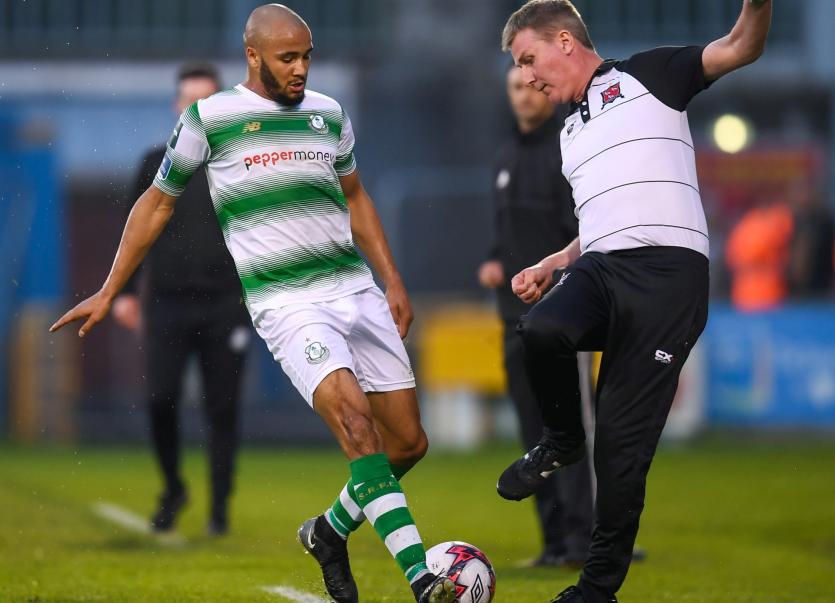 Ethan Boyle seen here when he was with Shamrock Rovers and Stephen Kenny was Dundalk manager. PICTURE: Sportsfile

Wexford native Ethan Boyle will be hoping to get one over some of his former team-mates when Finn Harps take on champions Shamrock Rovers in Tallaght this evening. (Kick-off is 8.00 pm)

The 24-year-old defender left Harps at the end of the 2017 season to join the Hoops, but is now back in Ballybofey having also taken in a stint with Linfield.

“It’s going to be very tough,” he said, adding that to get three points from the trip “would be amazing.”

Harps go into the game lying in sixth spot, and he feels that come the end of the season if that is where they are “everyone will be happy with that.”

He points out that we are not even half-way through the campaign so there is a lot of football to be played still and the important thing is not to be dragged down, and to be able to push on.

Boyle has been a regular for Harps since returning for his second spell under Ollie Horgan.

The Harps boss has known him for several years and watched his progress, starting from his schoolboy days.

Interestingly, in an old FAI Schools profile, when asked about a nickname, Boyle responded: “The beast of the south-east”.

Boyle has made more than 160 senior appearances between Harps, Linfield, Shamrock Rovers and Waterford.

And he has played in the qualifying rounds of the Europa League and Champions League.

Commenting on the mid-summer break, he felt that it had been nice to “switch-off a bit” after a busy run of games that he described as being “relentless”.

Boyle is getting plenty of game-time, and is pretty content with the ways things have panned out. Indeed, he has played in all 13 league games to date.

“I’m happy with the season, as a whole I think we are doing well. I think I started playing well the last few games. It took me a while to get back into things but as a team we are doing okay.”

On a lighter note, when asked who he would tip for the Euros, he replied: “France”.