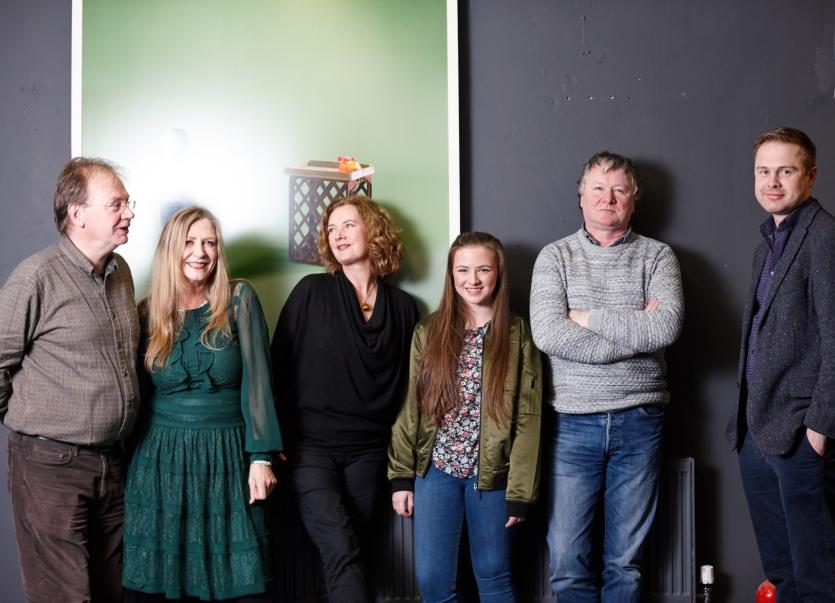 Na Mooneys who performed at Ceiliúradh na Féile Pádraig in 2017.

BBC Gaeilge will mark Seachtain na Gaeilge, the annual international celebration of Irish language and culture, with a range of content across its platforms.

From searching for the next stars of sport commentary to comedy podcasts telling the stories of four famous, or infamous, women from Ireland’s history, BBC Gaeilge will also bring audiences the best of contemporary and archive musical performances.

Inspired by these historical characters and by events in their lives, a cast of local comedy stars bring these four – some might view them as ‘notorious’ – women to life in four ten-minute podcasts that will be available on the BBC Gaeilge website and BBC Sounds from Monday 08 March, coincidentally International Women’s Day.

Featuring both fact and fiction, Celtic Kweens gives audiences an alternative take on key moments in their lives, with tales of love won and lost and battles fought and failed.

During the four episodes we hear how Úna, armed with nothing more than a typewriter, sees the money spinning potential of Pádraig Pearse's Proclamation while holed up in the GPO in 1916. Meanwhile, Maud agrees to take part in The Jerry McSpringer Show to meet the man who has a secret crush on her. The Pirate Queen, Gráinne has to use all her social media powers to sail a steady course when she’s summoned to the court of Queen Elizabeth I to account for her activities in the Province of Connacht. And can a family feud be settled when Aoife is finally confronted by her stepdaughter Fionnuala? It’s a 900 year-old saga and it appears these birds of a feather don’t stick together!

During Seachtain na Gaeilge the search is on to find the best young Irish language sports commentators. BBC Gaeilge is looking for new and upcoming talent in a competition to find the commentating stars of the future. Open to under 18s, there will be two lucky winners, one for 11 to15 year olds and one for entrants aged 16 and 17.

Budding commentators can log on to the BBC Gaeilge website bbc.co.uk/gaeilge where there is a selection of Gaelic games clips. Entrants can choose one clip to commentate on, in Irish, record their commentary and submit it via the website. The judges are looking for commentaries that are lively; commentaries that describe the action; fluency in the Irish language; commentaries that engage the listener and that show an understanding of the game.

A panel of judges will then select the winners who will be announced on Monday 15 March 2021 at 12 noon on the BBC Gaeilge website and on BBC Gaeilge’s social media accounts.

The winners’ commentaries will be broadcast later that evening on BBC Radio Ulster’s Blas Ón Taobhlíne with the winners invited to be a guest on the programme. The winners will also receive one hour of mentoring from a top BBC Gaeilge sports commentator, and, COVID permitting, will be invited to the commentary box at one of our next live match broadcasts. Full Terms and Privacy Notice are available on the BBC Gaeilge website bbc.co.uk/gaeilge

With Covid-19 restrictions, music fans haven’t been able to attend concerts, sessions and gigs. But they don’t have to miss out as Blas Ceoil will bring listeners an evening of the best in traditional Irish music in a special outside broadcast from Cumann Chluain Árd in Belfast.

Presented by Caoimhe ‘Ceol’ Ní Chathail the programme was recorded at the venue on Saturday 27 February and features a host of top traditional performances.

Presented by Tessa Fleming on Monday 08 March across BBC Gaeilge’s digital platforms, the short animation will take a humorous and wry look at these Irish women whose stories transcend history. From revengeful poets to ferocious warriors, queens and Fionn McCumhaill’s wife, these women were more than a match for any male counterpart and not to be messed with.

Sean-Nós From Armagh and beyond, Blas and BBC Gaeilge Digital Platforms, from Tuesday, March 9.

During Seachtain na Gaeilge, BBC Gaeilge will be dipping into its rich archive of musical performances from recent years. On Blas and across its digital platforms, listeners can enjoy recordings made at outside broadcasts including Fermanagh, Tyrone, Derry and Down.

For many people, St Patrick’s Day 2021 will be a lot different from previous years. But to celebrate the day and to round off Seachtain na Gaeilge, BBC Gaeilge is broadcasting one of one of its most memorable St Patrick’s Day concerts. Recorded in 2017, Ceiliúradh na Féile Pádraig, will be broadcast again on Wednesday 17 March at 9pm on BBC Two Northern Ireland.

The concert hosted, by John Toal and Pauline Scanlon, was recorded at The Glassworks in Derry and featured music performances from a host of top traditional acts. Expect some toe-tapping and dancing in the living room as Four Men & A Dog, Aldoc, Na Mooneys, Cúig and many more bring viewers some great St Patrick’s Day entertainment.

The programme was produced by Sonas Productions for BBC Gaeilge with support from NI Screen's Irish Language Broadcast Fund.