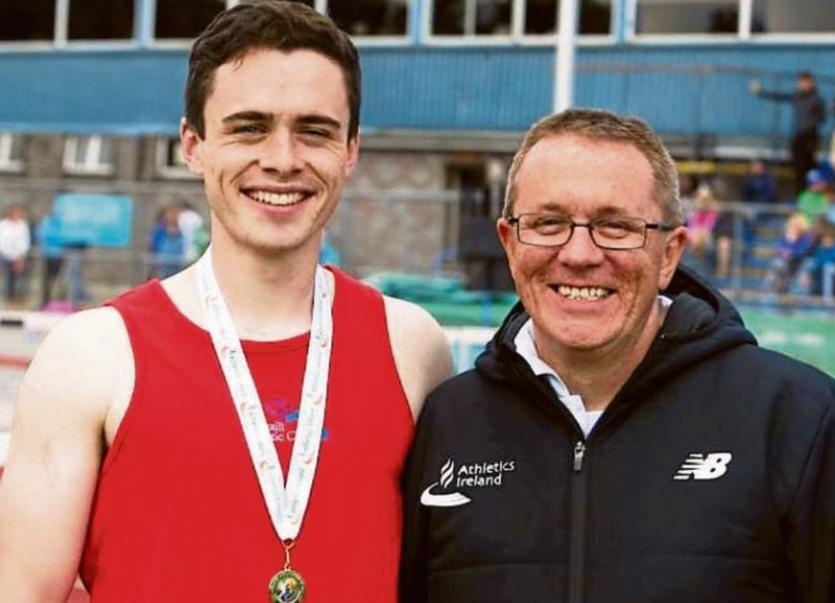 Following on the success of club athletes at the National Seniors two weeks ago, Christopher Doherty, on Saturday last at the Glo Health Irish Under 23 and Junior championships in Tullamore added another podium placing and a personal triumph to the ever growing successes of Tir Chonaill AC athletes at the top rung of Irish athletics.

Christopher, a 3rd year medical student in Trinity College, bounced back from a stream of injuries and setbacks over the last two years, to claim first place in the U23 Pole Vault.

The popular Donegal Town man overcame hazardous conditions of wind and rain - the meet was stopped for twenty minutes in the afternoon when the track and field areas became waterlogged - to push Conor Daly, St Abbans and Shane Aston, Trim into the minor placings.

Clubmate, Kelly McGrory, in the Under 23 400m, Hurdles final led as the race approached the final barrier. However, the Laghey woman lost her rhythm and was pipped by the fast finishing Karen Dunne, Bohermeen.

Kate McGowan in the Junior U20 400m Hurdles final, following a great tussle with Arleen Crossan from Finn Valley, had to give way over the final sixty metres and added a silver medal to her ever increasing trophy cabinet. Caoimhe Byrne was the final club athlete in action. She finished fifth in a highly competitive Junior Women's Pole Vault.

Congratulations to the following young athletes on very good performances at the All Ireland children's games on Sunday last in Tullamore. A sincere thanks to club coaches and parents for support on the day

The club's summer camp in Donegal Town 4th to 8th July was attended by over 60 children.

Club juvenile athletes, all qualified at Ulster championships, will contest Part 1 of the All Ireland individual events and relays at Tullamore on Saturday and Sunday next. We wish all an enjoyable and successful experience

The club also wishes local man Karl Griffin all the best in the European Championships in Amsterdam. Karl competes in the heats of the 800m today (Thursday).