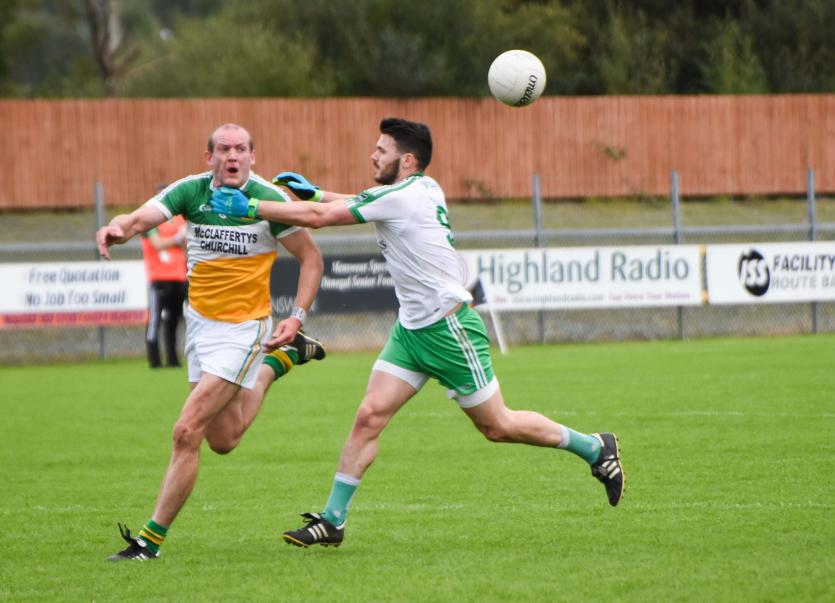 Glenswilly's Neil Gallagher gets his pass away against MacCumhaill's. Photo Geraldine Diver

PHOTO: Michael Murphy hits 2-5 as Glenswilly much too strong for MacCumhaill's

Glenswilly haven’t gone away you know as their nine point win over Sean MacCumhaill’s, in this afternoon’s quarter-final, in O’Donnell Park, shows.

Their big three of Michael Murphy, Neil Gallagher and Gary McFadden led from the front and all the rest around them responded.

Murphy and McFadden played as two lone raiders up front and between them they accounted for 2-11 of the 2-20 with county skipper, Murphy, ending the game with 2-5 and McFadden 0-6.

Big Neil chipped in with two points, one of them that could have been easily a goal and he was also provider for Murphy’s second green flag.

Glenswilly got down to business from very early and Murphy got the scoreboard ticking inside two minutes after good approach play from Gary McFadden.

McFadden got his name on the scoresheet for the first time two minutes later when he curled over from a tight angle with his trusty left boot.

Neil Gallagher, Murphy and McFadden were making their presence felt and big Neil after a fine fetch and run combined with Murphy top pop over point number three.

MacCumhaill's were really struggling at this stage to make any headway up front against a packed Glenswilly defence that just swallowed up the Finnsiders’ early attacks.

But Glenswilly continued to dominate and the 2013 champions were 0-6 to 0-1 in front before Aaron Kelly kicked MacCumhaill's second point on 13 minutes.

And when Darren O’Leary pointed shortly after the margin was back to three, 0-6 to 0-3.

However, that is as close as MacCumhaill's got and Glenswilly stuck to the game plan and the points flowed and they hit four without reply to open up a 0-10 to 0-3 lead with just over five minutes left in the half.

MacCumhaill's, to their credit, came more into the game and when Aaron Kelly found Darren O’Leary who drilled past James Gallagher to peg the margin back to four.

And when Marty O’Reilly, who had a very quiet game, nipped in for a point the gap was down to three again, 0-10 to 1-4 before Murphy made it a four point game at the interval, Glenswilly 0-11, MacCumhaill's 1-4.

A Murphy goal within 11 seconds of the restart restored Glenswilly’s seven point advantage and in reality the game as a contest was over.

Murphy scored after taking a route one ball from big Neil Gallagher, who won the throw-in.

Glenswilly went into cruise control and outscored MacCumhaill's by four points to two in the opening seven minutes of the second period to open up a 1-16 to 1-9 lead. And by the time Murphy raced through from halfway to plant goal number two for a 2-20 to 1-11 advantage, Michael Canning was already plotting and planning next week’s training routine.

In fairness to MacCumhaill's, despite looking down the barrel from a long way out, battled to the finish, none more so than Darren O’Leary, who hit six of their second half points.